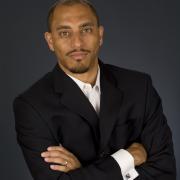 Hasan Kwame Jeffries attended Morehouse College in Atlanta, Georgia, the nation’s leading institution for educating African-American men. While matriculating at Morehouse, he was inducted into the Phi Beta Kappa honor society and initiated into the Pi Chapter of Kappa Alpha Psi Fraternity, Inc.

While completing his graduate work, he lived periodically in Montgomery, Alabama, the birthplace of the modern civil rights movement. In 2002, he relocated to Tuscaloosa, Alabama, where he served as the Bankhead Fellow in the history department at the University of Alabama. He spent one year at Alabama, teaching American history and African American history.

After time well spent in the “Heart of Dixie,” Jeffries crossed the Ohio River and joined the faculty at The Ohio State University in the history department. Since arriving at Ohio State, Hasan has taught graduate and undergraduate seminars on the Civil Rights and Black Power Movement, and surveys in African American and American history. He is the author of Bloody Lowndes: Civil Rights and Black Power in Alabama’s Black Belt (NYU Press). Jeffries' current book project, entitled Stealing Home: Ebbets Field and Black Working Class Life in Post-Civil Rights New York, explores the struggle of working class African Americans to secure and enjoy their freedom rights, from the height of the civil rights era through the present.

History Moves With Us

The Courage to Teach Hard History

The central role that slavery played in the development of the United States is beyond dispute. Yet, the practices of teaching and learning about this fact remain woefully inadequate. Professor Hasan Kwame Jeffries introduces Teaching Hard History: American Slavery, which can help change that.
Hasan Kwame Jeffries
Bookmark This PageSave

Looking back and looking ahead at the struggle to end segregated education.
Hasan Kwame Jeffries
x