Selma | The Bridge to the Ballot 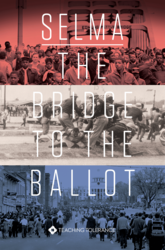 This film kit is no longer available for order. We apologize for any inconvenience.

This film tells the story of a courageous group of students and teachers who, along with other activists, fought a nonviolent battle to win voting rights for African Americans in the South. Standing in their way: a century of Jim Crow, a resistant and segregationist state, and a federal government slow to fully embrace equality. By organizing and marching bravely in the face of intimidation, violence, arrest and even murder, these change-makers achieved one of the most significant victories of the civil rights era.

The Selma-to-Montgomery legacy includes the sacrifices of young people whose history is seldom told. Share their stories with your students.

"We didn't have a clue we were making history. We were just trying to correct wrongs, trying to make some wrongs right."
—Bettie Mae Fikes

Want to know more? You can view the Selma: The Bridge to the Ballot trailer, experience an interactive timeline and learn more about voting issue here.