The American civil rights movement of the 1950s and 1960s took on both kinds of injustice. Students who sat in at lunch counters challenged Jim Crow laws that made segregated public facilities legal. They were protesting against de jure segregation, or segregation that was allowed by law. Other activists protested against segregation that was against the law, but that persisted nonetheless. In 1961, segregation of interstate bus travel was illegal. But in the South, interstate buses and bus stations continued to segregate black people and white people. Despite the fact that segregation was against the law, challenging it was dangerous.

In 1961, the Freedom Riders, an integrated group of college students, boarded buses in Washington, D.C. and headed south. Their aim was to challenge de facto segregation. Because segregation on interstate buses was against the law, they wanted the federal government to enforce that law if segregationists challenged their right to ride the buses together. In this lesson, students analyze a photograph from the freedom riders’ protest.

1. The handout defines two terms: “de facto segregation” and “de jure segregation.” Working with a partner, take turns explaining the definitions and discuss them to be sure you understand what they mean. Make a class T-chart on chart paper, with a column labeled “De facto Segregation” and a column labeled “De jure Segregation.” (Note: Distribute sticky notes so that each student has one or two.) With your partner, draw on your knowledge of American history, textbooks or the Internet and come up with one or two examples of each type of segregation. Write each example on a sticky note and put it on the class chart in the appropriate column. (Note: Read the examples that students have posted, asking after each one if it is in the correct column. To ensure all students participate, consider thumbs up for yes and thumbs down for no. When there’s a discrepancy, encourage further discussion: Why or why not?)

Based on your knowledge of Morgan v. Virginia, explain why the Freedom Riders’ actions were an example of protesting de facto segregation.

3. With this understanding of de facto segregation and the civil rights movement, look at photograph A. It was taken in Anniston, Alabama on May 15, 1961 after a white mob attacked the bus and its riders. Read the relevant section of this web page to learn more about the Anniston attack. 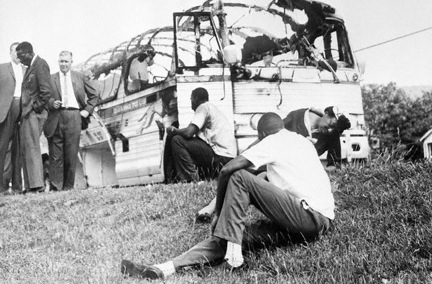 Read the questions below and write down short answers to them. Then, with your group, take turns answering the questions. Each student in the group will share an answer to one of the questions.

4. Return to what you read about the Anniston attack. Compare the description of what you read and the photograph, using a Venn diagram. When you’re done, list with your group what is valuable about each type of communication. Use your list to contribute to a class discussion based on this question: How do photographs compare with written communication?

Caption for photograph A:  15 May 1961, Anniston, Alabama, USA—“Freedom Riders” sit beside a burnedout Greyhound bus they had ridden which was burned by a mob of white people who attacked it on the highway. The Freedom Riders were testing laws desegregating bus terminals. Image by © Bettmann/CORBIS.