White Teachers at the Crossroads 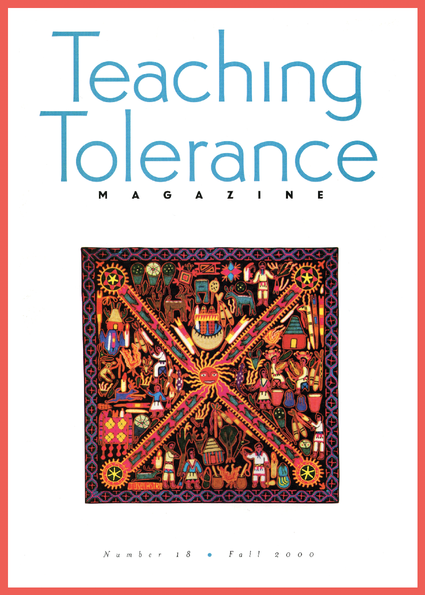 Approximately 90 percent of K-12 teachers in the U.S. are White, while 36 percent of the national school population are students of color. This contrast underscores the critical role of White teachers in challenging racial bias in the curriculum and in school culture. A prerequisite for effectiveness in this effort is a willingness to confront one's own attitudes and privileges.

As an African American educator, one of my main concerns is that we all need to be liberated from schooling that perpetuates America's myths. One such myth that constrains our freedom of thought and our ability to pursue social justice concerns our national identity.

Most of the pre-service teachers I taught at Santa Clara University for 12 years were White. Because most of them accepted the myth that America is a White nation that is becoming more diverse, they also believed that their mission as teachers was to help these diverse "others" to be like them. These relatively privileged White future teachers could scarcely imagine that there is anything wrong with America or that multicultural education has anything to do with them -- with what is wrong with their education.

When we discussed what schools do, they struggled with the realization that while White supremacy racism denies equitable education to the poor and students of color, miseducation for domination denies White teachers and students opportunities to develop their humanity -- including understanding of and real respect for diversity.

The consequences of miseducation were clearly evident when a clash of viewpoints erupted about new history textbooks that were about to be adopted in California in 1992. Declaring that the books were "so much better" than the ones they had, many White teachers were eager to get the California State Board of Education's Curriculum Commission, on which I served, to approve these books. On the other hand, a diverse array of parents and educators argued that these supposed "multicultural" books perpetuated racism by distorting the history and heritages of people of color and by centering the White American immigrant experience as the normative standard. What were some of the concerns about these books that these White teachers, as well as my pre-service students, failed to see?

Although the textbooks were eventually approved with some minor changes, a parade of diverse voices asked: "Who is included in this textbook's idea of 'us'?"

The majority of teachers who supported the books ignored the problems of perspective bias and defended the monocultural (White) viewpoint as multicultural. They reframed the controversy as an ethnic conflict, asking: "Are you saying that a White author cannot write accurately and with sensitivity about the experiences of other groups?" The author's race was not our concern; the worrisome issue being ignored was the social interests that the author's perspective represented.

Things haven't gotten much better over the last eight years. While subsequent revisions included removing the camel, the problem of perspective bias exists not only in textbooks but in the presumably academic scholarship and neutral scientific knowledge the authors of these books draw upon.

Is there a role for White teachers in multicultural education? Yes, indeed. But they must first recognize that the struggle for education as a basic human right, like the Civil Rights Movement, is a moral struggle. The United Nations Universal Declaration of Human Rights is instructive: "Education shall be directed to the full development of the human personality and to the strengthening of respect for human rights and fundamental freedoms. It shall promote understanding, tolerance and friendship among all nations … ." To play a significant role, White teachers need to learn specific strategies of curriculum inclusion, culturally sensitive (relevant) pedagogy, and skills for promoting understanding, tolerance, friendship and respect for diversity in particular communities. Working in communities of color, White teachers need to hone these skills in close partnership with more experienced colleagues who have the community's best interests at heart.

Culturally and socioeconomically encapsulated White students living within gated communities must overcome different obstacles in achieving the "full development of [their] human personality" than those that students in inner-city communities typically encounter. In solidarity with other teachers and parents who are well-respected in the community, White teachers must join the "minority" that will be attempting to meet students' real learning and development needs. The alternative is an education that fails to enable teachers and students to challenge injustice and thus perpetuates domination and what I call "dysconsciousness" -- a habit of mind that accepts the status quo as a given.

Advocating equity and social justice and becoming active community-building agents for social change are educational and moral missions that good teachers of all colors and ethnicities need to embrace for the sake of their own humanity. White teachers have as great a stake as the rest of us in this kind of education -- if they are to be free to choose their own humanity versus the tyranny of White supremacy racism. For "whiteness" is, as James Baldwin said, "a state of mind; it's even a moral choice."

Joyce E. King is Associate Provost at Medgar Evers College of The City University of New York and Chairperson of the Commission on Research in Black Education, an initiative of the American Educational Research Association.

How We Are White

The break is over, and I am ready to begin the second half of a four-hour multicultural curriculum workshop. Twenty-five teachers and staff are scrunched into 2nd grade desks, all eyes and White faces turned toward their one African American colleague, who has asked to address the group. He announces that he will be leaving this workshop immediately and resigning from his position at the end of the year. He has lost hope in their willingness and ability to deal with issues of race.

After he leaves, a painful silence grips the room. I realize my planned agenda is no longer appropriate. Gradually the participants begin to talk. Their comments are rife with guilt, shame, anger, blame, denial, sadness, confusion and frustration. It becomes clear there has been a long history leading to this moment. Together they are experiencing a collective meltdown over the realities of race and their own Whiteness. One faculty member remarks, "I feel so helpless. What am I supposed to do as a White teacher?"

In my 25 years of work in multicultural education, I have encountered an almost universal uneasiness about race among White educators. Since the publication of my book We Can't Teach What We Don't Know: White Teachers, Multiracial Schools, many people have shared their stories with me. A White teacher from California reports, "I realize that I have contributed to the failure of my students of color by not being able to drop the mask of privilege that I wear. Another White teacher writes, "I thought I was going crazy. It was helpful to hear that other White teachers feel similar confusion."

As White educators, we are collectively bound and unavoidably complicit in the arrangements of dominance that have systematically favored our racial group over others. In my own family, the farm in Minnesota that I cherish as part of our heritage was actually stolen from the Ojibway people only a few years before my great-grandparents acquired it. This is only one of countless ways I am inextricably tied to privilege. I did not personally take the land, yet I continue to benefit from its possession.

But privilege and complicity are only part of the story. The police officers who brutally assaulted civil rights activists during the Selma march in 1965 were certainly White, but so were many of the marchers who stood on the Edmund Pettus Bridge with Dr. Martin Luther King Jr. on that awful Sunday. It is true that three White men dragged James Byrd to a horrific death in Jasper, Texas, but it is also true that many White townspeople and a predominantly White jury condemned this act of racist violence.

In the course of my work and personal reflection, I have discovered there are many ways of being White. Some Whites are bound to a fundamentalist White orientation. They view the world through a single lens that is always right and always White. White supremacist hate groups represent one particularly hostile form of fundamentalist White orientation, but there is also an uninformed and well-intentioned version that simply has never been exposed to other perspectives. This was my orientation from birth through my high school years, when I had never met a person who wasn't White. Fundamentalist White teachers often say, "I don't see color. I treat all my students alike."

Other Whites live from an integrationist White orientation, where differences are acknowledged and tolerated but still not fully accepted. Integrationist Whites are self-congratulatory in their apparent openness to racial differences, yet often paternalistic and condescending toward people of color. In this way of being White, we prefer to keep the peace, avoid confrontation and maintain control, rather than actually get to the core of our separate truths and unique racial perspectives. Integrationist White teachers say to students of color, "I know how you feel," even when we have no real connection to their reality. This was my orientation when I first began "helping" Black kids in the ghetto in the 1960s. I thought I was the answer, rather than the question.

White educators do have a choice to grow beyond our ignorance, denial and guilt. There is a journey, which I envision as a river that carries us through many confusing currents and treacherous rapids, but which eventually can lead to a place of authentic multicultural White identity. Ultimately, good teaching is not a function of the color of our skin. It is much more closely related to the temperament of our mind and the hue of our heart. We did not choose whether to be White, but we can affect how we are White. This is both our challenge and our hope.

In the last few years I have returned several times to work with the elementary staff who experienced such a painful meltdown over issues of race. With courage they have stayed on the river, chosen to look deeply into the reflective pool of their own difficult history together, and have come to a place of honesty and renewed commitment to a multicultural vision for their school. At our last meeting, when the painful event was alluded to in discussion, a newly hired Asian American teacher asked, "What happened?" A veteran White teacher responded, "It's a long story we need to share with you. It will help you know who we are."

Gary Howard is currently President of the REACH Center for Multicultural Education in Seattle. He is the author of We Can't Teach What We Don't Know, available from REACH at reach@nwlink.com or (206) 545-4977.