What do you do with a teacher who provides students with authentic learning opportunities? A teacher who invests her own resources to support students? A teacher who was voted Teacher of the Year two of the last three years? If you’re Superintendent Jacqueline Cassell at the Pontiac Academy for Excellence Middle School in Pontiac, Mich., you fire her.
Alice Pettway
Add to a Learning Plan
X
Add to an Existing Learning Plan
START A NEW LEARNING PLAN
Print 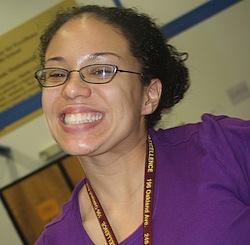 What do you do with a teacher who provides students with authentic learning opportunities? A teacher who invests her own resources to support students? A teacher who was voted Teacher of the Year two of the last three years?

If you’re Superintendent Jacqueline Cassell at the Pontiac Academy for Excellence Middle School in Pontiac, Mich., you fire her.

When Brooke Harris contacted us last week, her first concern was not her career—it was her students. She worried that she had let them down by not fighting harder for her job. She worried that their essays on Trayvon Martin would no longer be included in the school newspaper. She worried that the superintendent in charge of their education would continue to underestimate them.

We’re worried about Brooke’s students too.

Last month Brooke Harris’ eighth-grade class asked her about the “kid who was killed over some skittles;” she seized the opportunity to bring her students’ lived experiences into the classroom—a strategy we and other experts advocate.

Brooke’s students identify with Trayvon Martin. Many of them are African American. Many have been stopped by police who thought they looked suspicious.

In fact, her students engaged so deeply with the issue that they asked to take it beyond essays and class discussions—they wanted to take action to help Trayvon’s family.

They, like many students across the nation, wanted to show their support by wearing hoodies. Each student who participated would pay $1. Proceeds would be donated to Trayvon’s family.

Again, Brooke saw a teachable moment. She and her students began the formal process of organizing a school event. Students wrote persuasive letters to the principal and superintendent. Brooke and a co-worker filed the necessary paperwork. The principal immediately signed off on the fundraiser.

Superintendent Cassell was less enthusiastic. She refused to approve the proposal, despite having supported many other “dress down” fundraisers. Brooke’s students took the disappointment in stride, but asked to present their idea to Cassell in person.

And that’s when things got weird.

Brooke asked that a few of her students be allowed to attend her meeting with Cassell. Outraged by the request, Cassell suspended Brooke for two days. The explanation given—she was being paid to teach, not to be an activist.

Those two days morphed into a two-week, unpaid suspension when Brooke briefly stopped by the afterschool literacy fair (she had previously organized) to drop off prizes (paid for with her own money) and to pick up materials for several students whose parents were unable to attend. Supporting her students was insubordination.

The final offense? Brooke asked Cassell to clarify her original transgression so she could learn from her mistake. Cassell referred her to the minutes of their first meeting. Still confused, Brooke again requested an explanation. Cassell fired her.

The Pontiac Academy for Excellence is a nonunionized charter school. According to Superintendent Cassell, Brooke’s contract makes no provisions for formal appeal, and Michigan is an “at will” employment state. What does this mean to Brooke? She has no right to an explanation of why she was fired. She just was.

There is a reason Michigan’s English Language Proficiency Standards call for students to “engage in challenging and purposeful learning that blends their experiences with content knowledge and real-world applications.” Students learn better this way.

Real life is not clean. It is not clear cut. It is not safe. But it is the world our students live in and they will be required to navigate it as adults. Teachers must bring this outside world into the classroom.

The only way this will ever happen is if we create an environment in which teachers feel safe discussing controversial issues with their students. Stories like Brooke’s are outrageous in their own right, but even worse, they create an atmosphere of fear among teachers.

This fear is choking our educational system, but we can pry its fingers loose if we work together. In Brooke’s forced absence, her students held their own, unsanctioned hoodie day. They made their voices heard over the fear. So can you.

Sign our change.org petition calling for Brooke Harris’ reinstatement at the Pontiac Academy for Excellence Middle School and tell administrators we will not tolerate the silencing of our nation’s best teachers.