At the end of the lesson, students will be able to:

Copies of the editorial cartoon (below).

Share with students that dialogue, or the words spoken between people or characters, is sometimes used in editorial cartoons in the form of text in speech bubbles. Dialogue in editorial cartoons often uses the kind of language that the people would actually use. For example, if the subjects being portrayed are children, the dialogue might include slang. If the characters have accents, the text might reflect that. Dialogue is one way to capture a person’s true voice—as well as his or her strong feelings and point of view.

Make copies of or project the cartoon below. 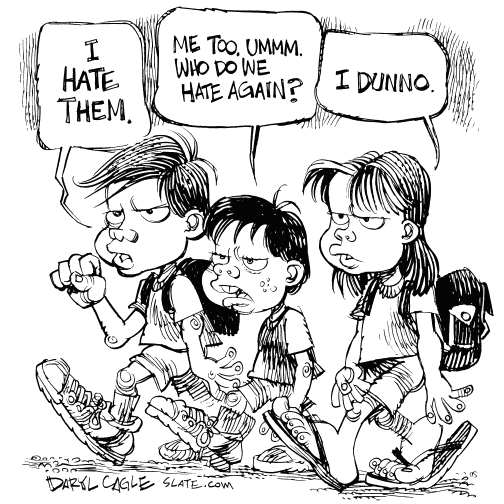 1. Ask the class to discuss the following questions:

2. Divide students into pairs or small groups. Ask the groups to examine the following questions:

3. As a class, discuss the concept of hating another group of people:

Tell group members to work together to create a cartoon that points out the dangers of hating an entire group of people. Tell students to use carefully crafted dialogue to convey a powerful message. Ask the groups to discuss their cartoons with the class. Have students submit their cartoons to a school or community newspaper/website.

Using Editorial Cartoons to Teach Social Justice is a series of 14 lessons. Each lesson focuses on a contemporary social justice issue. These lessons are multidisciplinary and geared toward middle and high school students.
lesson
Bookmark Editorial Cartoon: Bullying

This is the tenth lesson in the series "Using Editorial Cartoons to Teach Social Justice."
x