This is the eighth lesson in the series "Using Editorial Cartoons to Teach Social Justice."

Editorial cartoons comment on current political topics. Some topics—like immigration—that are part of today’s political debates have also been part of political debates in the past. This cartoon is an example. This cartoon was published in the March 9, 1882 issue of Puck, the Chinese Exclusion Act became law in May of 1882, so this cartoon was part of the legislative debate then. The Chinese Exclusion Act banned immigration from China; it was the culmination of decades of discrimination against Chinese immigrants, many of whom had come to work in the United States. It was not repealed until World War II, when China was a U.S. ally. (You can read more about the Chinese Exclusion Act here, and the text of the Act here.)

Puck, a magazine of political commentary and humor, published this cartoon. Because the cartoon is from the past, it looks a bit different from the cartoons you see today. Working with a group, make sure you understand what is going on in the cartoon. What activity is going on in the picture? What do the two captions—1st caption: The Anti-Chinese Wall; 2nd caption: The American Wall Goes Up as the Chinese Original Comes Down—tell you about what is going on? Who is doing the activity? What can you tell about them? How can you tell? 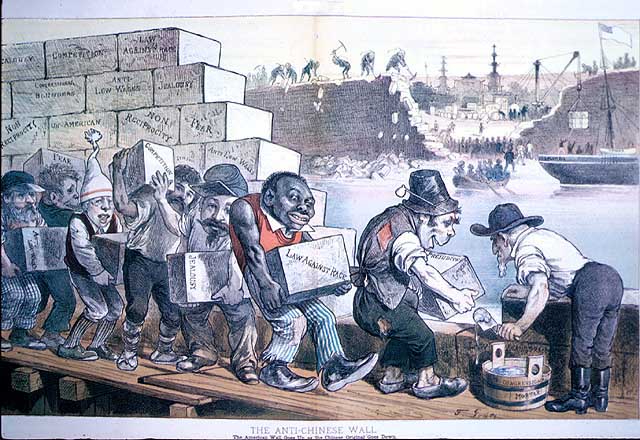 For useful background details about this cartoon, click here.

Now look at the strategies that make the cartoon “work.”

Remember that irony refers to a situation in which something happens that is the opposite of what was expected. What is ironic about the people in the cartoon doing what they’re doing?

Caricature is another strategy that cartoonists use to make their points. Caricatures often grossly exaggerate certain features of people or specific stereotypical group features. Caricature makes the people recognizable to readers; it can also make people laugh. You may have seen prominent individuals drawn as caricatures. For example, the size of Barack Obama’s ears is exaggerated in some cartoons, as is the size of Sarah Palin’s hair. Whole groups can be drawn as caricatures, too. For example, law enforcement officers are often shown as extremely beefy and aggressive.

This cartoon uses caricatures to represent specific groups of people. What groups do the caricatures in this cartoon represent? Why do you think the cartoonist used them? How else might he have conveyed the same information? Do you think he made good use of caricature or do you not like it? Why?

What point was the cartoonist making about Chinese immigration?

Research the Chinese Exclusion Act and the current arguments about immigration to the United States. Make a graphic organizer (a Venn diagram or a T chart, for example) comparing the immigration debates during the two time periods, and use it as the basis for a compare-and-contrast essay.