Old Joe and the Carpenter: An Appalachian Tale of Building Bridges

Old Joe lived way out in the countryside, and he had one good neighbor. They’d been friends all their lives. And now that their spouses were buried and their children raised, all they had left were their farms … and each other. 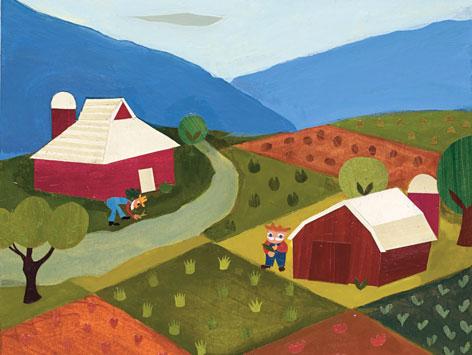 But for the first time, they’d had an argument. It was over a stray calf that neither one really needed. It seemed as though the calf was found on Joe’s neighbor’s land and so he claimed it as his own. But Old Joe said, “No, that calf has the same markings as my favorite cow, and I recognize it as being mine.”

Well, they were both a bit stubborn, so they just stopped talking to each other. It seemed that a dark cloud had settled over Old Joe … until there came a knock on his door one week later. 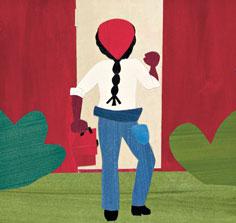 He wasn’t expecting anybody that morning, and as he opened the door, he saw a young woman who had a box of tools on her shoulder. She had a kind voice and dark, deep eyes, and she said, “I’m a carpenter, and I’m looking for a bit of work. Maybe you’d have some small jobs that I can help with.”

Old Joe brought her into the kitchen and sat her down and gave her some stew that he had on the back of the stove. There also was home-cooked bread, fresh churned butter and homemade jam.

While they were eating and talking, Joe decided that he liked this young carpenter, and he said, “I do have a job for you. Look right there through my kitchen window. See that farm over there? That’s my neighbor’s place. And you see that crick [creek] running right down there between our property lines? That crick, it wasn’t there last week. My neighbor did that to spite me. He took his plow up there, and he dug a big old furrow from the upper pond and flooded it.

“Well, I want you to do one better. Since he wants us divided that way, you go out there and build me a fence — a big, tall fence — so I won’t even have to see his place anymore!”

And the carpenter said, “Well, if you have the lumber and the nails, I got my tools, and I’ll be able to build something that you’ll like.”

Joe had to go to town to get some supplies, so he hitched up the wagon and showed the carpenter where everything was in the barn. The carpenter carried everything she needed down to the crick and started to work.

The carpenter’s work went smooth and fast. She did her measuring and her sawing and her nailing. It was about sunset when Old Joe returned, and the carpenter had finished her work. When Old Joe pulled up in that wagon, his eyes opened wide and his mouth fell open: There wasn’t a fence there at all.

It was a bridge, going from one side of the crick to the other! It had handrails and all — a fine piece of work — and his neighbor was just starting to cross the bridge with his hand stuck out, and he was saying, “Joe, you’re quite a fellow to build this bridge. I’da never been able to do that. I’m so glad we’re going to be friends again!”

And Joe, he put his arms around his neighbor and said, “Oh, that calf is yours. I’ve known it all the time. I just want to be your friend, too.” 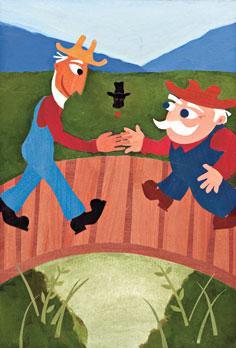 About that time, the carpenter started putting her tools in the box and then hoisted it onto her shoulder and started to walk away. And Joe said, “Wait, come on back, young carpenter. I want you to stay on. I got lots of projects for you.”

The carpenter just smiled and said, “I’d like to stay on, Joe, but you see, I can’t. I got more bridges to build.”

So she walked on, and there ends my tale.