TT Educator Grants support social justice work in the classroom, as well as at the school and district levels. Latinx middle schoolers in California interviewed community leaders who reflected about the challenging and rewarding path to a thriving adulthood.
Jey Ehrenhalt
Teach This in a Learning Plan
X
Add to an Existing Learning Plan
START A NEW LEARNING PLAN
Bookmark Spotlight on Latinx Leaders Tomorrow
Print

Among the wide array of grant projects that educators have led over this last year, those that highlight the power of human connection stand apart for their authenticity and profound interpersonal impact. In Santa Rosa, California, Curriculum Specialist Bonnie Raines thought her students could be inspired if they saw their identities reflected in the lives of successful adults. The project “Latinx Leaders Tomorrow” was born.

The disproportionate racial makeup at Raines’ middle school is striking. Fifty percent of students are Latinx, but only 9 percent of teachers are. Latinx administrators comprise just 12 percent of the professionals on campus. After hearing Lakia Davis, a racial equity facilitator, speak about youth identity empowerment, Raines was inspired by Davis’ idea that positive adult modeling sends this message: “If you can see it, you can believe it.”

Raines thought, “If students can envision themselves in the future by meeting with real people with similar backgrounds, they may think, ‘This is me. This is my experience. This is what I’ve gone through, too.’” This affirming relationship, she reasoned, could serve as an encouraging reference point for years to come. To help students begin to build these relationships, she planned to have them interview local leaders in the Latinx community.

She began by partnering with two middle school teachers: Ruth Moore and Casey Moore. Casey Moore immediately came on board. “I wanted to give an experience to my Latino students,” he says, “my second language students, who struggle in school. I wanted to connect them with leaders in the community. ... People who had gone through similar experiences in their formative years, experiences my students could relate to.”

Raines also contacted leaders in her community who spoke English as a second language. She chose participants carefully and structured the interviews as person-to-person conversations that she hoped would bring the connections alive. One interviewee served as the first Latino mayor of Santa Rosa; another was running for sheriff. One had been a principal and teacher; another had graduated from a scholarship support program for first-generation college students.

With the support of a Teaching Tolerance grant, Raines invited the oral history nonprofit Listening for Change to teach the students interviewing skills like active listening and asking open-ended questions. The group also provided audio-visual and editing support and set up the recording equipment. The interviews took place in a professional studio, complete with a backdrop and television camera—a setting Raines says made the project feel particularly special for students.

Students asked the leaders about hardships they had faced in their younger lives. “All middle school kids go through a very difficult time,” Raines explains, “but it’s especially hard when you feel different.”

Adults spoke about feeling invisible at school and also about feeling hyper-visible, singled out for bringing burritos for lunch instead of bologna sandwiches. One speaker, Aracely, told how, when her kindergarten teacher couldn’t pronounce her name, the woman changed it. For the rest of her school years, Aracely explained, she answered to “Sally,” the teacher’s anglicized version of her real name.

Raines says the kids’ responses to these experiences were immediately palpable. She saw them thinking, ‘This is my life. If these people can make it, then I can make it.’ To conclude the project, students created poster presentations with photos, written reflections, letters, collages, poetry and family interviews. They presented them to around 40 adults at an evening event at school. On her poster, one student wrote: 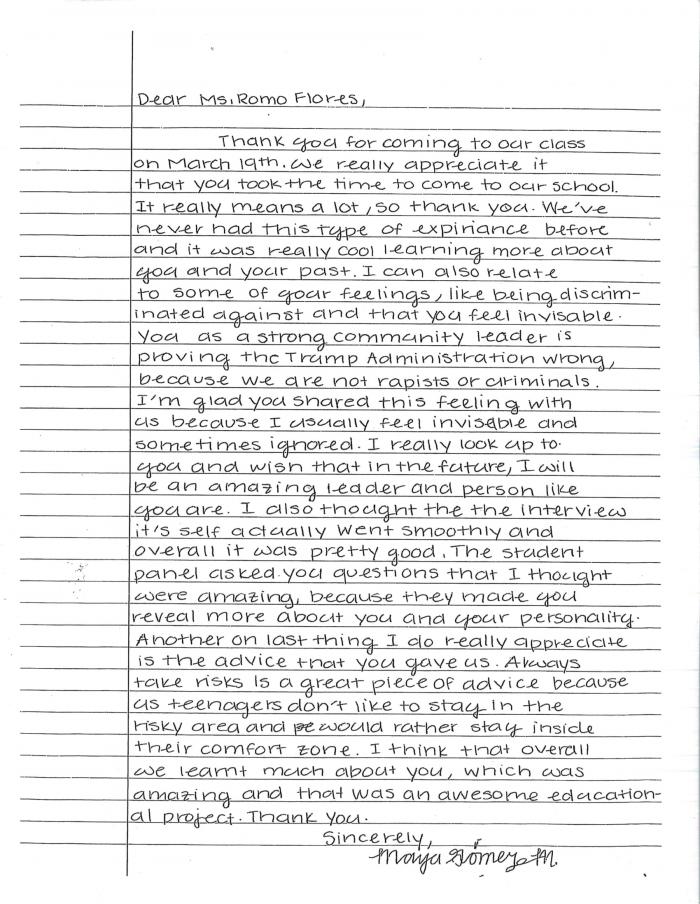 Thank you for coming to our class on March 19th. We really appreciate it that you took the time to come to our school. It really means a lot, so thank you. We’ve never had this type of expirience before and it was really cool learning more about you and your past. I can also relate to some of your feelings, like being discriminated against and that you feel invisible. You as a strong community leader is proving the Trump administration wrong, because we are not rapists or criminals. I’m glad you shared this feeling with us because I usually feel invisible and sometimes ignored. I really look up to you and wish that in the future, I will be an amazing leader and person like you are.I also thought the the interview it’s self actually went smoothly and overall it was pretty good. The student panel asked you questions that I thought were amazing, because they made you reveal more about you and your personality. Another on last thing I do really appreciate is the advice you gave us. Always take risks is a great piece of advice because us teenagers don’t like to stay in the risky area and would rather stay inside their comfort zone. I think that overall we learnt much about you, which was amazing and that was an awesome educational project. Thank you.

As teacher Casey Moore reflected after the project had ended, “We can talk to students about these issues until we’re blue in the face. But instead, we decided to bring in people who model this struggle and are successful. I don’t mean they’re successful in a materialistic way, but they’re well-adjusted people in a profession they get lots of satisfaction from. And they’re happy.”

Watch some of the students’ videos below!

Learn more about the Teaching Tolerance Educator Grants program and apply for your own grant here!

Ehrenhalt is the school-based programming and grants manager with Teaching Tolerance.

TT Voting and Democracy Grants fund projects that encourage students to become empowered advocates for voting in their communities. Grants and School Programs Manager Jey Ehrenhalt spoke with grantee Sarah Emmett about the work her students will be doing this fall.
Jey Ehrenhalt
article
Bookmark Spotlight on Whose Renaissance?

Read about how one teacher used a Learning for Justice grant to help fund a daylong conference empowering girls of color in Boston.
Jey Ehrenhalt
x