One educator's reassessment of his approach to teaching and our schools' support of Latino students.
Jim Wilkinson
Issue 14, Fall 1998
Teach This in a Learning Plan
X
Add to an Existing Learning Plan
START A NEW LEARNING PLAN
Bookmark Just Another Face
Print 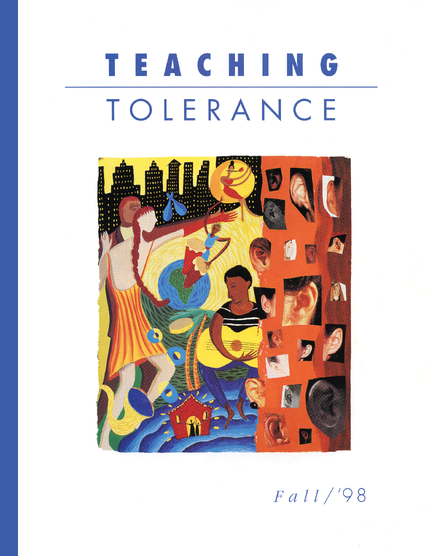 In February 1993, I learned that a former student of mine, Juan Perez, had been involved in a shooting on Valentine's night and was in jail for murder. I was stunned. How could a quiet, studious 16-year-old use a gun on another human being? There had to be a mistake. But it was true, and having been Juan's 9th grade Spanish teacher at Marquette University High School in Milwaukee, I had to find out what happened. In the course of my search, Juan went from being in my classroom to someone who inspired me to rethink both my approach to teaching and our school's support system for Latino students.

In June 1991, eighth grade valedictorian Juan Perez had appeared proud and optimistic as he addressed his fellow junior high graduates, encouraging them to use their education to break the cycle of poverty and violence that gripped the school's neighborhood on Milwaukee's South Side. Juan was bound for Marquette High in the fall on a full scholarship, and his future looked bright.

Like most of his peers, Juan grew up straddling the Anglo and Latino worlds. In his predominantly Mexican and Puerto Rican neighborhood, he was "Juan" to some and "Johnny" to others. One of his older brothers, Hector, a leader of the Spanish Cobras gang, had been in and out of jail for his role in turf battles with the rival Latin Kings.

But Juan wanted no part of that. He was going to be the first in his family to make it to college. After his father died in 1991, Juan took on more responsibility at home, helping his mother run the household and looking after his three sisters. He also held a summer job at a local arts center. The director there remembers Juan as a responsible worker who borrowed armfuls of books every weekend.

In August, Juan started his freshman year at Marquette, an all-male Jesuit high school in central Milwaukee that sends 98 percent of its graduates on to college. Sixty percent of the students come from the suburbs, and, in 1991, eighty-six percent were White. Juan was one of two Latinos in my Spanish class, and there were only seven other Latino students in the freshman class of 235. There were no Latino teachers on our staff.

While Juan was in my class, I treated him just like any other "B" student who did his work and didn't cause trouble. That is, I pretty much ignored him. Juan finished my class at the end of the year, and the next year I heard that he had dropped out of Marquette. Too bad he couldn't make it, I thought to myself, and school went on, without Juan.

A Deadly Turn
Then in February came the news of the shootings. Juan had been out late on a Saturday night drinking a few beers with his friends. They had stopped to eat at a restaurant they considered Cobra territory when a group of Latin Kings came in and began to curse and taunt Juan and his friends. One of the rivals challenged Juan to go and get his brother Hector. "Tell him to come down here -- I'll slap him, too."

Juan dashed home and came back with his brothers Will and Hector. Both Juan and Hector carried guns into the restaurant. The Kings' leader confronted Hector and knocked him down. Juan watched in horror as blood spurted from his brother's mouth.

Angry and panicked, afraid he would be next, Juan fired his gun wildly. Hector rose and shot, too, and in a few short seconds two people were dead and another seriously injured.

"Thinking about the shooting, it all seems real blurry," Juan recalled later. "I swear to God I can't remember doing those things. … I keep going over it. … I keep wondering what else I could have done."

The Perez brothers fled after the shots, and the next day Juan, watching the news, found out for the first time that people had died because of him. "I couldn't believe I had done that," he told me. "I was sick to my stomach thinking about it." A couple of days later, Juan turned himself in.

I spoke on Juan's behalf at his sentencing hearing in September 1993. At one point, he told the families of his victims: "If I could, I would trade my life for theirs." The judge sentenced Juan to 60 years in prison and Hector to 50. Juan will be eligible for parole in the year 2008.

Unfamiliar Territory
Since his incarceration, I have corresponded with Juan and visited him at the Green Bay Correctional Institution. As we tried to analyze what caused Juan's life to spin out of control, I discovered there was a lot I had not known about this young man.

I didn't know that, because of his brother's gang affiliation, his house had been a target of drive-by shootings and that he tried to study away from the windows so the bullets wouldn't find him. Depressed and unable to sleep, Juan missed more school, and his grades dropped.

"I thought I was real smart in grade school, and so did everyone else," Juan reflects. "At Marquette, it seemed like everyone was ahead of me. I didn't know how to write a lab report or do the science projects. I was pretty discouraged, and I didn't feel like I was smart anymore."

In his neighborhood, too, Juan felt isolated. His friends were more interested in hanging out than in discussing report cards and college plans. And they hassled him for studying too much.

Once he dropped out of school, Juan was lost. When his academic dreams dissolved, he stopped reading and began spending more time on the streets with his brother and his friends. He started to carry a gun, just to feel safe. "I never, ever thought I would use it. … I honestly believed that if I had a gun around, maybe my family wouldn't get hurt," he said later.

Tough Lessons
Today a picture of Juan hangs in my office to remind me of the lessons he and I learned from this experience. Testifying to his intelligence and determination, Juan earned his G.E.D. even before his classmates graduated from Marquette. He is the president of the Latino discussion group at Green Bay and reads every book he can get his hands on.

And I have a deeper appreciation for the day-to-day pressures my students face and for my responsibility to be more aware of what is going on in their lives. I also have a clearer idea of how Marquette as an institution can be more welcoming to its Latino students.

In 1996, I was named the school's first Latino Affairs Coordinator. In this role I offer support and try to make the transition to Marquette easier for our Latino students. One way we do this is by providing information in Spanish about the school and its services. Because some students enter Marquette already speaking Spanish, we developed a course entitled "Spanish for Native Speakers," which affirms home language and culture.

We also formed a new club called "Orgullo Latino" (Latino Pride) that meets twice weekly for social interaction and peer tutoring. It encourages members to value their heritage and helps educate all students about Latino culture. We still do not have a Latino teacher on our faculty, so I bring in Latino leaders from the community to serve as role models.

I asked Juan Perez to write a letter to future Latino students at Marquette, and each year I tell my students his story and read his words, which he has agreed to share here. As I watch them relating to Juan's voice, his struggles, his advice, I see his face among theirs and desperately hope the words are sinking in.

A Letter from Juan

My name is Juan Perez. I'm a 20-year-old Mexican American serving a 60-year sentence at Green Bay Correctional Institution. Let me tell you a little bit about myself -- about how I messed up -- and I can only hope that each of you will learn something that will help you.

I was a student at Marquette High School. I dropped out at the beginning of my sophomore year. Everyone had said that I was the last person they thought would've failed. I did fail, and that's why I'm writing to you all now.

I came to Marquette from a grade school that was 95 percent Latino. My first problem was trying to find my place in a new school that was almost 90 percent White. At first I made an effort to fit in and socialize with other students. I tried, but not hard enough. In my mind, I saw them as different people who didn't think like I did, so I gave up and didn't participate in the school's activities.

I now realize that we live in a world with a lot of different people. To succeed in the world, or in school, you need to make an effort to communicate and cooperate with everyone. You can't isolate yourself with just your own kind. Even here in prison you can't do well unless you integrate and get along with everyone.

One of my biggest mistakes was not asking for help. My pride kept me from admitting that I was having problems. I knew Marquette had people who were there to help, but I didn't take advantage of them. I tried doing everything by myself, but you can't do it by yourself. And you should never feel ashamed when you are feeling overwhelmed.

I also wasn't involved enough in school activities. Again I made the mistake of isolating myself. We all have the need to be part of a group. I turned to my compas, who I let bring me down. I'm not saying you should turn your back on your old friends. Just don't let anyone bring you down.

At the end, I had just given up, and in a moment filled with fear and confusion, I committed a violent act. I don't want you to face a terrible moment like that. I hope that someday all Marquette students will feel accepted and that you will reach out when you need help.

If any of you would like to write to me, my address is below. Good luck, and I pray that none of you fails.