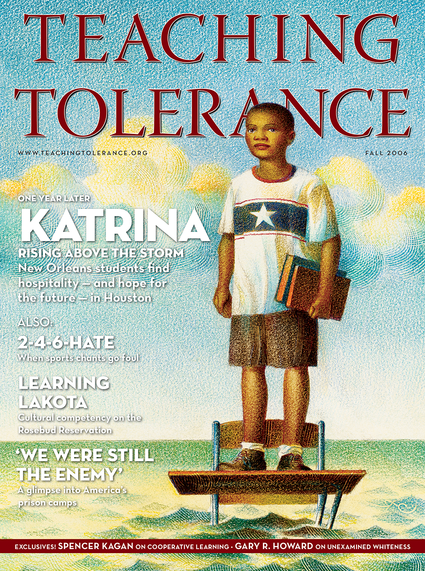 Imagine a classroom teacher detailing ways to taunt and name-call, drilling her students on chants designed to humiliate another group of students. Who, anywhere, would expect that to happen?

But in school gyms and stadiums, such behavior -- sometimes characterized as humor rather than humiliation -- often is the norm. Racial, religious, ethnic or socioeconomic differences between teams often increase the volume of intolerance, and win-at-all-cost boosters may ignore or even encourage such verbal venom.

"We're talking about respectfulness," said Michael Josephson, founder of the Character Counts Coalition and creator of its Pursuing Victory With Honor program. "It's respecting everybody -- yourself, your fellow students, your opponent and the game itself."

Josephson brings it back to the classroom: "You don't have a right to yell out insults (at a school sporting event) any more than I could stand over your shoulder in class and boo and hiss every time you made a mistake."

How nasty have trash-talking high school fans become? Consider a few examples from around the nation:

In 2003, white fans at a Show Low, Ariz., high school heckled a visiting Apache basketball team with this class- and race-based chant, assigning second-class citizenship to Native Americans. Many in the crowd dismissed the fan behavior as a joke -- a tactic often used to discount or minimize the damage done by racialized language.

Harold Slemmer, Arizona Interscholastic Association executive director, said that more adults than students were involved in the jeers. State administrators ordered the entire school to complete the Pursing Victory With Honor sports program. Slemmer said that no fan incidents have been reported since.

In February 2006, students at Douglas Freeman High School in Richmond, Va., were banned from attending the district tournament quarterfinal basketball game at their school. Dr. Edward Pruden Jr., Freeman's principal, chose the one-game punishment in response to how his students, a week earlier, had singled out a star player on an opposing team. When arch-rival Mills E. Godwin High School visited, fans of the Freeman Rebels repeatedly heckled a player on the Godwin team, chanting references to the gay-themed movie Brokeback Mountain.

The cheer defied school policy -- a policy emphasized throughout the year and even sent home in a letter to students' families. The school specifically prohibits cheering against opponents, especially when cheers ridicule an individual player.

These assorted insults came in March 2005, when Lake Oswego, Ore., hosted Portland's Lincoln High. Lake Oswego students singled out Lincoln senior Omar Leary, after a baseless rumor swept the stands that the black player was a 20-year-old who had been held back.

The stereotype to which she referred was not race, but affluence.

By contrast, a nearby Oregon City basketball team gets heckled in other ways.

"The chants are common when Oregon City hits the road," Snethen said. "I attended a game in inner-city Portland earlier this season where the home crowd started chanting about trailer trash. The Oregon City kids laugh it off. ... They wear their redneck/country [reputation] as a badge of honor."

In Massachusetts, Provincetown High School teams have fought back against offensive cheers. Because the town has a well-known population of openly gay residents, the teams have been bombarded with anti-gay shouts from opposing crowds.

The Nantucket principal responded, threatening to ban all Nantucket students from the stands to quash the epithets.

Any personal detail can fuel a taunt. In 2004, the Sioux Falls, S.D., Argus Leader newspaper examined fan misbehavior in the state.

Some putdowns aimed at individual players included chants of "Daddy's boy" against a coach's son, "Average Joe" (comparing a player's first name with a reality show of the same name), and "Kill whitey!" and "Sunscreen," both against a player with light hair and complexion.

"They find whatever is a glaring weakness, a soft spot," said James Staunton, commissioner of the southern sector of the California Interscholastic Federation.

The overweight softball player. The smaller-than-average football player. If nothing else, Staunton said, some fans might settle for chanting a player's first name in a sarcastic singsong.

"I don't think taunting is racial. It is harassment, in my opinion. It's a group activity," he said. "Or, more precisely, a pack activity."

Tim Bell, athletic director for Marshalltown High School in Iowa, said such cynicism can be glorified by the media.

"Our students learn from television," he said. "All college games are broadcast. They watch ESPN. If Duke University fans can do it at a game, why not here?"

When negative chants flow from the stands at high school games, cheerleaders may get caught in the crossfire. They also can be part of the solution. What's the best response to the worst-case scenario?

"If fans are booing the referee or getting on one individual player, cheerleaders need to start a positive cheer as soon as possible," said Jim Lord, executive director of the American Association of Cheerleading Coaches and Advisors. "The simple cheers are best at getting as many people as possible to join in, drowning out the negative chants."

Kathy Crowley, head cheerleading coach at Peninsula High School in Gig Harbor, Wash., said chanting can be at its worst when cross-town rival Gig Harbor High comes to compete. "It is hard to control the chants, but both schools' cheerleaders do the best they can," she said. "A lot of it has to do with the respect given to cheerleaders. There are many schools where cheerleaders are well respected and, in turn, are viewed as leaders. But then you have schools where cheerleaders are disrespected and not paid attention to at all, no matter what they do."

Crowley's cheerleaders remain ready to counter-chant "Seahawk Power!" anytime negative taunts sound. They'll sweeten the deal by tossing free school T-shirts and spirit towels into the crowd. "We are basically redirecting our fans' attention," she said, "which for us has been successful."

'We crossed the line'

One Washington state school made headlines for the handling of its own negative cheering. In 2000, Port Orchard's South Kitsap High School hosted the Foss Falcons of Tacoma.

In the waning minutes of a home-team loss, South Kitsap fans began berating the fans and players of predominately black Foss.

By game's end, South Kitsap's players and coach apologized to Foss for fan behavior in the stands.

The next day, South Kitsap's athletic director, principal and student body president co-signed and delivered a letter of apology to Foss, just hours after South Kitsap Principal Dave Columbini learned about the taunts.

"I'll never forget it," Columbini said, five years after the incident. "Immediately, I got on the intercom. I shared that the cheering was inappropriate, that we crossed the line, and that it will not be tolerated in the future."

Columbini's strategy involved a rapid public response and a focus on converting the incident into a learning experience. He thanked his players and coach, who diffused tensions by apologizing to their Foss opponents immediately after the game.

Next, Columbini said, "We held a summit with Foss students. They came and shared how it made them feel. This happened within a month, still in the basketball season. From our league, we invited 10 to 15 students per school for a meeting. Students worked together to create the Narrows League Sportsmanship Slogan. It hangs in our gym and is read before every game."

Columbini, in just his second year as principal, never had faced such a school crisis. "An incident like this affects not only your school, but your community and another community," he said. "A lot of healing needed to take place."

"We were on our kids for anything that seemed like a negative cheer," he said. "As a result, the kids clammed up. Parents called, saying, 'Let them cheer!' We explained we wanted a lot of noise and a lot of fun without negative cheers. We give them some freedom, but we won't tolerate cheers degrading an individual or race."

'This is Our House'

Many schools face a balancing act in defining negative cheering. Racial slurs and intolerant language contradict the ideals of competition, but silence is not the answer.

In Iowa, Bell and his department realize students are out for entertainment, not necessarily citizenship lessons. That's why the school's pre-game sportsmanship pledge, previously read over the public-announcement system by an adult, is now recited by a student.

"When they hear it from a peer, students pay more attention," he said.

In Washington state, during a recent South Kitsap overtime basketball game lost by one point at the buzzer, Columbini found his own packed gymnasium quiet with two minutes left.

"I went into the crowd and told our kids, 'This is our house. Let them hear you,'" he said. "Then, the cheers of 'Offense!' and 'Defense!' started. Sometimes, you have to show them how to have fun."

Josephson, of the Character Counts Coalition, knows of one league that required near silence at games.

"I think that's horrible," he said. "Everyone should be able to passionately and enthusiastically be involved in the game. The question is appropriateness of conduct."

While many chants targeting individuals are negative and disruptive, there are examples where the cheers are positive, supportive and downright uplifting.

Jason McElwain of Greece Athena High School near Rochester, N.Y., learned that first-hand during the last game of his senior year. McElwain is autistic, a child who did not speak until age 6. And as a senior, the special education student who sat on Athena's bench became the target of taunts during road games from more than one home-team crowd.

But the chants on this night were far from heckling. Students held up signs with the 17-year-old's nickname, "J-Mac." Classmates knew this might be their first and only chance to see McElwain play.

"The fans up there were chanting my name the whole entire game until those last four minutes," McElwain said.

Throughout high school, McElwain served as team manager. So for Senior Night, and the last regular season home game, coach Jim Johnson gave his student assistant the ultimate present: allowing him to suit up for the first time.

With four minutes left to play and a 20-point lead, Coach Johnson heard the chants, too. He pointed to McElwain.

For one night, McElwain traded his white shirt and black tie for a headband and number 52. The student cheering section raised paint-stirring sticks to their faces. Each had McElwain's photo attached. They chanted his name, a spectacle that brought Coach Johnson to tears.

Later, McElwain would confess, "I just wanted to score a basket." However, he missed his first three-point attempt, an air ball some 6 feet astray. A missed lay-up followed.

His coach felt the tension: "I put my head in my hands and thought, 'Please Lord, just get him a basket.'"

But no one gave up on the 5-foot-6 substitute.

"The thing about Jason is he isn't afraid of anything," Jason's father, David McElwain, told reporters. "He doesn't care what people think of him. He's his own person."

Four unbelievable minutes later, in a gymnasium free of boos and jeers, "J-Mac" poured in a buzzer-beating three-pointer. Fans and teammates whisked him off the court on their shoulders, celebrating his performance.

Since that magical night in February, McElwain has met President Bush and received an ESPY award.

And everyone will get a chance to cheer this inspiration. Columbia Pictures has acquired movie rights to McElwain's life story, complete with the ultimate storybook ending: Greece Athena won that year's state basketball championship.

Although McElwain resumed his familiar job of team manager for the title game, fans filled the arena with chants of "J-Mac!" after the victory.