Papalotzin and the Monarchs: A Bilingual Tale of Breaking Down Walls

The day finally arrived when the Great North built a Great Wall to separate itself from the Great South. But would they live to regret it?
Rigoberto Gonzalez
Issue 30, Fall 2006
Add to a Learning Plan
X
Add to an Existing Learning Plan
START A NEW LEARNING PLAN
All articles from this issue
Print 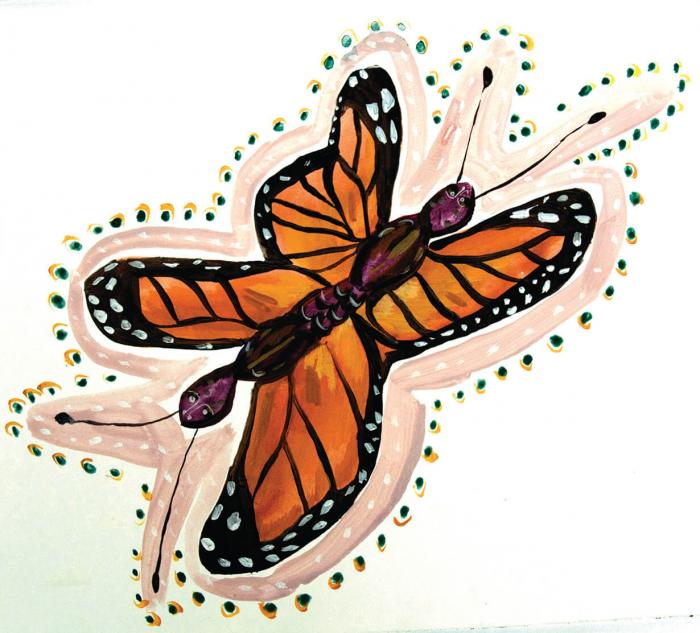 At first, the people of the Great South didn't mind so much. Besides, they thought, they were the fortunate ones: The monarch butterflies had remained on their side of the wall, fluttering around like flakes of orange and gold every day of the year.

But Papalotzin, Royal Butterfly among the Aztecs, was very upset by this. Since time began the butterflies had moved freely back and forth. Their migration was like the circulation of life on Earth!

Papalotzin was right to be concerned. When the butterflies tired of flying in circles before the imposing wall, they began to drop to the ground. Once the monarchs were gone, there was no more color in the sky and everything began to fade to gray. The sunflowers lost their yellows. The browns of the tree trunks, the reds of the apples, the pinks of people's hands -- all of it began to disappear! Even the proud grasshopper became depressed when he was left invisible without his green coat.

The people of the Great South cried for help: "Oh, great Papalotzin, soon we will all be colorless ... as death!"

Papalotzin peeked over the Great Wall and discovered that the people of the Great North also were suffering. Everything on the other side also was fading into gray. The strawberries were no longer red. The oranges were no longer orange. And the conversational blue jay stopped talking because he had nothing to say without the brilliant blue of his feathers. "Whatever shall we do?" the people of the Great North cried out.

In flight once more, the monarchs spread across the skies; immediately the colors started coming back. Everyone celebrated, North and South: ¡Urraaa! Hooraaay! The grasshopper jumped in happiness now that he was visible again, and the blue jay sang, joyful in his brilliant blue.

The Great North and the Great South decided it was best to leave things this way, to let the monarchs, and everything and everyone, migrate back and forth for the rest of time. And Papalotzin thought so too as he flapped his great wings and pushed the beautiful rainbows high into the sky.