Bullying and the Bottom Line

Early in the 2016-17 school year, DeMarcus*—a fifth-grader in Montgomery, Alabama—had his first encounter with bullying.

His grandmother, Erma Freeman, knew DeMarcus as a strong-willed kid and initially did not worry much about the incident. She told DeMarcus to either brush it off or to stand up to the bullies.

But within a matter of weeks, Freeman found herself bribing DeMarcus to go to school, scheduling counseling appointments for him and making frequent trips to the school and the central office to try and get help.

The bullying continued. By late November, DeMarcus, who has epilepsy, began having seizures again—his first in three years.

After his 10th seizure in just a few weeks and numerous missed school days, Freeman decided it was better for her grandson to be homeschooled. In all, she estimates DeMarcus missed at least 15 days of classes due to the bullying he experienced.

DeMarcus is not alone. Across the United States, students miss thousands of school days each year due to issues, such as anxiety, fear and illnesses, directly tied to the bullying they experience. Those absences, compounded with other negative effects of bullying, cost students and teachers precious classroom time and also have a little-realized financial impact on schools.

As a June 2017 study out of The University of Texas at Austin illustrates, bullying has potentially huge economic costs to schools. The main finding of the study, which looked at California’s public K-12 institutions: Schools may lose more than a quarter-billion dollars annually due to bullying-related absenteeism.

Stephen Russell, chair of human development and family sciences at UT Austin, led the study. Russell is one of the country’s foremost experts on bullying and anti-bullying programs. He points out that California, like several other states and the federal government, base funding on per-pupil daily attendance—not enrollment. For this reason, it was fairly straightforward for Russell and his colleagues to calculate the economic costs of students avoiding school because bullying made them feel unsafe. The grand total: $276,133,055 in a single school year.

“I know people might say that it’s California, so of course the number is large. But I don’t know of a school system, even one that large, that can take a $276 million hit to its budget, especially when the problem can be addressed,” Russell says.

The study also found that more than 45 percent of students who missed school days did so because they felt unsafe due to bias-associated bullying against their race, gender, disability, religion or sexual orientation. That totaled 630,751 days of absences in a school year.

The cause for alarm should not begin or stop at the dollar line; students are avoiding going to school as a direct result of bullying—almost half of which targets their identities. That fact alone should be enough to spur schools and districts to action.

But a discussion of the lost funds does have its place. “What it does is provide a financial incentive for those who might need one,” Russell says. “I see this as evidence and data that can be used by those who are searching for help.” 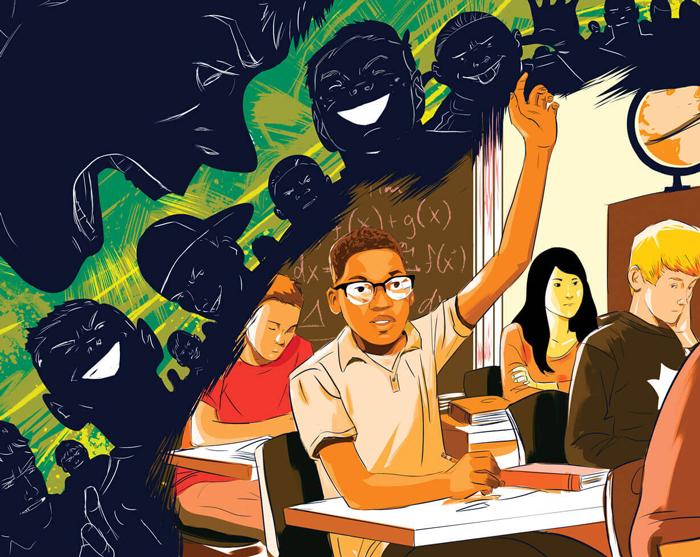 Pointing to the Numbers

Pointing to the economic costs of bullying—in tandem with highlighting the psychological, physiological and academic ramifications—can be an effective way to garner high-level attention and spur positive change.

“I think there are a number of financial factors that aren’t usually considered when we discuss bullying,” says Pete Price, director of social and emotional learning for the Austin Independent School District in Texas and a former principal. “Certainly, we know that bullying causes students to miss class time, which affects budgets. But what about parents who are forced to miss work to stay home with the kids or hire some form of day care? The cost of counseling?”

“I think this is a very powerful tool when it comes to state legislatures,” Price adds.

In Alabama, where DeMarcus attends school, the financial ramifications of bullying could be an attention-grabber to motivate the stakeholders who control the purse strings and dictate policy.

As a program coordinator in the Alabama State Department of Education’s Office of Learning Support, Marilyn Lewis is in charge of the state’s anti-bullying programs. The results these programs yield are far from encouraging.

A 2016 WalletHub analysis of data collected from a number of reports and surveys found Alabama to be the eighth-worst state in the country for prevalence of bullying and the fifth-worst state for high school-age suicide attempts in which bullying was a known factor.

“I’d believe that,” says Freeman when informed of those statistics. “The people at the school and the central office seemed completely overwhelmed by the problem. They had no answer for me.”

I don’t know of a statewide school system that can take a $276 million hit to its budget, especially when the problem can be addressed.

Lewis recognizes the statewide issues and knows that, even more than money, she needs motivated and dedicated people to turn the tide. But the urgency doesn’t seem to be catching on. Many administrators who work on anti-bullying efforts will find their experiences mirrored in Lewis’ situation.

“It is my experience over a number of years that money alone doesn’t solve a thing,” Lewis says. “What solves problems is involvement by dedicated people who truly want to fix the issues. I do believe it’s possible that this data could be a tremendous help in that regard.”

The Bottom Line Is More Than a Figure

If a desire to stop the loss of money serves as motivation for lawmakers and school officials to make bullying prevention a priority, it could spur the level of involvement necessary to implement more successful anti-bullying programs in more schools.

Bullying interventions play a crucial role in addressing harmful student behaviors and building positive school climates, but the type of intervention is a critical factor for success.

Most districts across the country, particularly in low-income and rural areas, either use no anti-bullying program or rely on the free program provided by the U.S. Department of Education. While Lewis says the one-size-fits-all programs are well put together, she admits the limitations of the generic model. “There’s not much variation, and what I’ve found is that our [low-income] and rural schools need very different types of programs because they experience very different issues.”

In his research, Russell has noticed that many of the anti-bullying programs in the country fail to address the focus of bullying. Instead of tailoring programs to target the primary root cause—specific biases related to race, religion, sexual orientation and so forth—they treat bullying as one general problem that can be solved through “don’t be naughty” lessons. (See below for more on bias-based bullying.)

That was true in DeMarcus’ case. Most of the bullying in his case was directed toward his weight, but the school never specifically addressed that, his grandmother recalls.

“Whatever they did had no impact whatsoever, and I think it’s because they took the attitude most of the time that, ‘Oh, that’s just how boys act sometimes,’” Freeman says. “But when it’s making a child sick and a doctor is telling you that it’s making him sick, you got to do something more.”

Russell hopes the cost-analysis component of his research could bolster support for “something more.” Price agrees, and he believes the data could be particularly useful when districts or schools are arguing to prevent losing counselors, who are usually first on the chopping block during budget cuts. Combining Russell’s data with additional scientific studies that show the effects of bullying on mental and physical health as well as academic performance could make counselors less expendable.

“We already knew from years of scientific research that bullying and the associated fears cause certain chemical reactions in the brain—the release of cortisol—that all but prevent a student from learning,” Price says. “This data shows the financial impact of this problem. I think it’s very likely that it could be used to convince some people that counselors and more comprehensive [anti-bullying] programs are not just helpful but necessary.”

Moon is an award-winning columnist and investigative reporter working in Montgomery, Alabama.

When Schools Miss the Bias in Bullying

According to Stephen Russell, there is scientific evidence that anti-bullying programs are more effective when tailored to the needs of the school. “We know that the more personal the involvement, the more specific the focus, the better the results,” he says.

In Alabama, where public education funding is historically tight, school districts have few options when it comes to selecting materials—videos, training programs, literature and so forth—for anti-bullying efforts. Most available materials offer a generic corrective approach and fail to address the specific root cause of bullying: bias.

Decades of studies and medical research indicate that the majority of bullying today stems from a personal bias and is targeted at one characteristic or factor.

“It could be racial- or gender-based; it could be related to a person’s sexuality,” Russell says. “But it’s focused at something. And the data we have now shows without a doubt that if you tackle the root causes, your programs are far more successful.”

Ideally, bullying programs that address bias are implemented along with curricular and school climate initiatives that carry the same message. Reading diverse texts, seeing people from multiple identity groups on posters and bulletin boards and hearing inclusive values articulated in multiple settings can all contribute to an environment where bullying happens less, upstanding happens more and students feel welcome at school.