What can we assume about students’ health based on their weight? Nothing.
Robert L. Reece
Issue 57, Fall 2017
Bookmarked 7 times
ILLUSTRATION BY MICHAEL DRIVER
Add to a Learning Plan
X
Add to an Existing Learning Plan
START A NEW LEARNING PLAN
All articles from this issue
Print

“I will always, without mitigation, and without any ease, utterly hate my external body,” says Maggie O’Leary, a graduate student at Cornell University. “I learned when I was very young that I couldn’t use the entire length of my legs when I walk, for example, because that meant a very audible, noticeable displacement of my weight … [and] opened my body up to being viewed in ways that were perhaps even more cruel than a general ‘look, fat, look away’ encounter with someone else’s gaze.”

The childhood stigma O’Leary experienced—and the way it shaped her long-term relationship to her body—is not unique. Americans devote a tremendous amount of energy and anxiety to the topic of fatness, real or imagined. We are constantly bombarded with obesity statistics and told how fat we have become. Advertisements show the latest fad diets and champion products promising to make us thinner, more fit, healthier and—theoretically—happier.

The Centers for Disease Control and Prevention (CDC) defines obesity as “having excess body fat,” as determined by body mass index (BMI). The American Medical Association officially classified obesity as a disease in the midst of a decades-long public-health scare about the state of body size and its relationship to health, often dubbed the “obesity epidemic.” Few aspects of this supposed epidemic seem to stir the public as much as the dreaded childhood obesity. According to the CDC, the proportion of school-age children with obesity has more than tripled since the 1970s and hovers at around 20 percent today. The organization names obesity as one of the 10 most important public-health concerns facing the country.

However, mounting evidence suggests that the connection between body size and health is not as clear as many people assume. Moreover, our collective obsession with that connection—and the stigma associated with it—may spawn an entirely separate set of problems.

Children and schools are not immune to these problems. Children may suffer, as O’Leary did, the negative effects of fat stigma long after their tenure as K-12 students has ended.

The word fat has a long history of negative connotations. We choose to use it in allyship with fat-positive activists and others who seek to remove the stigma associated with large body types.

A spate of recent research shows that obese children and adolescents suffer from lower self-esteem, self-worth, wages and quality of life than their thinner counterparts.

But obesity itself isn’t the mitigating variable; fat stigma is.

Fat stigma is driven by a society that conflates size and health and uses size to define individual self-control and worth. Ashanté Reese, an assistant professor of anthropology at Spelman College, says that obesity often reads as a “visible marker of failure,” even for children—a “failure” that many people extend to parents as well.

Fat stigma is also an institutional phenomenon that can lead well-intentioned educators to engage in ineffective, even dangerous practices. It influences how teachers and administrators attempt to govern fat children with policy. For example, in 2004, Arkansas implemented a statewide program in which every student’s report card would include a BMI indicator and a rating of whether the child was “normal,” “at-risk” or “overweight”—essentially a fat report card—with encouragement that families of overweight children seek medical assistance on their behalf.

Ultimately, the program failed. “It didn’t help [the children] lose weight. It didn’t make them healthier,” Reese notes. “And then it also increases stigma, but not only just stigma for the children … [but also] stigma for the parents, and then even more explicit stigma for single-parent households.” 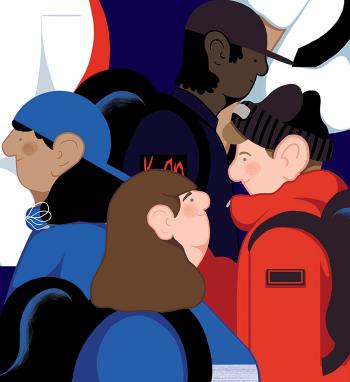 In some cases, educators’ biases against fat students also affect how schools respond to anti-fat bullying by students’ peers. James*, now an adult working as an engineer, was bullied because of his weight as a child, but he does not harbor resentments against his former peers. Instead, he laments how the school system responded to his victimization. “The problem is when the administration absolutely refuses to do anything about it and instead penalizes and further ostracizes the person on the receiving end of the abuse,” he reflects. “I feel like that’s where the majority of the damage came from in that situation.”

The bullying was so intense that James worked to graduate from high school early and escape his isolation. Not only did his educators not address the bullying, they also silenced him.

“[They] just wanted the problem to go away so they just threw me in detention,” James says. The prevailing message he got as a result? “‘Oh, he’s in detention. Maybe he won’t speak up next time, and I won’t have to deal with this as a result.’”

The Long-term Effects of Fat Stigma

Enduring weight-related bullying as a child isn’t just a childhood issue; it can lead to internalized stigma and destructive behaviors much later in life. A 2017 study co-authored by Rebecca Puhl of the Rudd Center for Food Policy and Obesity shows that weight teasing and bullying in adolescence may not only lead to higher BMIs 15 years later but also to such dangerous behaviors as extreme dieting and induced vomiting.

The story of New York native Jewel Brooks speaks directly to this phenomenon. Bullied for her weight as a child, Brooks began using diet pills as an adult to manage her perception of her own weight. She says that the appearance of health and maintaining her weight have become more important than actual healthy behaviors. “It’s like it’s a phantom of health. If I eat these Zantrex pills, Lipozene and all these types of things before I eat everything, then I can still eat like a fat kid, like when I was 10, but then I don’t have the consequences of it anymore,” she explains. “It’s the performance of health. It’s not actually healthy.”

Fat stigma is driven by a society that conflates size and health and uses size to define individual self-control and worth.

From destructive behaviors to low self-esteem to discrimination, the known negative effects of fat stigma should cause significant concern and calls for intervention. Schools are critical sites in the movement to reduce fat stigma because these issues so often begin with stigma experienced in childhood.

More often, though, the focus remains on fatness itself.

Reducing fat stigma in schools requires a multipronged approach that functions at the interpersonal, school policy and societal levels.

First, educators must speak carefully about body size and fatness. It is especially important to avoid the idea that it is students’ responsibility to lose weight to help reduce the stigma they experience. Studies show that weight loss does not necessarily lead to better self-esteem among students. Furthermore, suggesting to students that weight loss will end their torment unfairly blames them for the harm that other people inflict on them. It’s also critical to note that students may overhear educators speaking negatively about their own bodies and internalize those negative messages.

Second, schools must change policies that unfairly target fat students—even indirectly. One example is dress codes. Brooks recalls being told by adults that her clothes were “inappropriate” when she was as young as 9 years old.

“My shorts were inappropriate because I had too much thigh out; they’re too high,” she says. “They don’t come to the knee—maybe it’s about mid-thigh—but because my thighs are bigger, it’s being seen as being fast.” Similarly, school dress codes that point to fit, length and tightness disproportionately target certain students, particularly girls and fat students.

Third, while schools still hold a responsibility to teach students healthy habits, they must decouple discussions of health from discussions of weight. They can do this by incorporating Health at Every Size principles, which, according to the Association for Size Diversity and Health, were based on guidance from health care workers who “reject both the use of weight, size, or BMI as proxies for health, and the myth that weight is a choice.” This approach is compatible with multiple models of health, which Ashanté Reese calls on schools to adopt. “[We] are so focused on physical health that we disconnect it from mental and spiritual and other forms of health and wellness,” she points out.

Finally, it is important for students to see people of all sizes engaging in a variety of activities without stigma and without being pigeonholed into certain social roles based on weight. Given the negative health and social effects of anti-fat attitudes, internalized and otherwise, positive depictions of people of all sizes may go a long way toward improving the overall health of fat people—and toward reducing our collective misplaced obsession with weight.

Reece is an assistant professor of sociology at the University of Texas at Austin.

Despite how common it is to connect fatness with negative health outcomes, the evidence of that connection is, at best, mixed. Some studies even suggest that overweight people live longer, healthier lives, especially the elderly. In a 2015 paper, Braiden Hellec, a doctoral pharmacy student, and his colleagues at the University of Alberta in Edmonton reported little increase in the risk of mortality for people living at most body sizes. The only increases they found were at the far extremes, in people who were either severely underweight or severely overweight.

According to Daniel Goldberg, an associate professor in the Center for Bioethics and Humanities at the University of Colorado Anschutz Medical Campus, “There are probably more important factors for improving population health and compressing health inequalities than looking at the size of people’s bodies and trying to decrease them,” he says. “Of course there are extremes of any body size, which are bad for people, but that’s not what we’re talking about when we expand the goalposts of BMI and all of a sudden everybody’s huge and fat and death is stalking everybody.”

The legitimacy of an obesity epidemic has been challenged by scholars across the fields of medicine, law and sociology, most famously by Paul Campos in his 2004 book The Obesity Myth. But the perception of an obesity epidemic is enough to create a widespread atmosphere of stigma for fat people, and a growing number of studies suggest that stigma may be responsible for more negative health outcomes than body size itself.

A 2014 study led by Janet Latner of the University of Hawaii at Manoa shows that BMI was correlated with negative physical health-related quality of life only for women with high-internalized weight bias. A 2013 study led by Matthew Pantell of the University of California, San Francisco, compared the effect of social isolation to the more traditional risk factors of smoking, obesity, high blood pressure and high cholesterol. The study found the mortality risk of social isolation was rivaled only by the risk of smoking.