Humanity, Healing and Doing the Work

Honoring our collective humanity will result in an education system in which all children thrive.
Crystal L. Keels
Anya Malley
Issue 1, Fall 2021
Photography by Karsten Moran
Teach This in a Learning Plan
X
Add to an Existing Learning Plan
START A NEW LEARNING PLAN
Bookmark Humanity, Healing and Doing the Work
Print 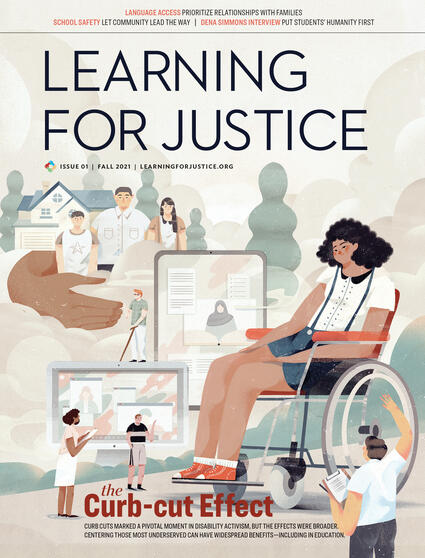 Dena Simmons, Ed.D., is the founder of LiberatED, a collective at the intersection of racial justice, social emotional learning (SEL) and healing in education rooted in radical love. Simmons has expertise in anti-racist education, emotional intelligence, social justice, teacher education and curriculum development. She is a graduate of Middlebury College and Pace University with a doctorate from Teachers College, Columbia University. Simmons has delivered two TEDx Talks, as well as a TED Talk on Broadway, and has been featured widely across various media outlets. Identified as one of a new generation of activists for social change, she is the author of an upcoming book, White Rules for Black People. Simmons recently spoke with Learning for Justice to discuss lessons learned from the pandemic and what to carry forward to make education more equitable.

This conversation has been edited for length and clarity.

We are looking back at lessons learned from the pandemic and the sudden move to remote learning. What aspects of the educational system should we move forward, using the pandemic as a pivotal point for ways to imagine better? 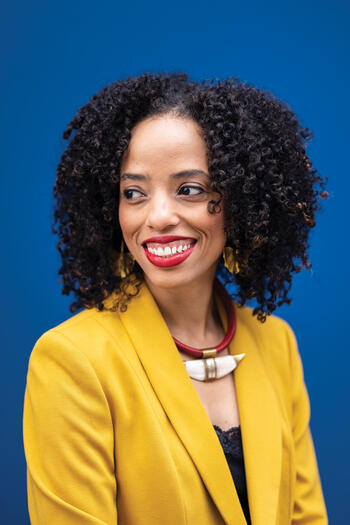 I feel like we need to throw the whole system away. It sounds like I’m taking the easy way out by saying that, but what we’ve learned through the pandemic is that much of what we were doing before was because it was convenient and what we knew. However, there’s a tension between equity and efficiency. We need to be doing the work of equity, which takes time. It’s a process, but we have not yet invested in it, as we’ve learned from the heightened inequities during COVID-19. If we invested in creating equitable spaces, my hope is that we could dream up collective liberation too.

At the same time, we have seen how, when we have pressure on us, we can innovate and make so much happen with limited resources. We suddenly found resources and saw more public-private partnerships to support the education of young people in this country. Where was that commitment before?

You have said the United States functions with inequity by design. How do we get people to see the potential in imagining something different for education—that it can actually be for everyone?

The first step is honoring our collective humanity and understanding our education system does not serve all children well. For all of us to thrive, it needs to serve every child well. I’ll just give an example in terms of equity. If we look at the sidewalk—I’m a city girl—there’s a little dip. That dip was made so that getting up from the street to the sidewalk is accessible. I’m not in a wheelchair, but I still benefit. I benefit from that little dip when I have my luggage or when I’m walking with my niece or nephew. Like the little dip, we all benefit from equity, and that may get people to start thinking about how we can ensure that education is a place where all children can thrive.

If we look at what’s happening right now in the country with the work I’m doing as an activist, as an anti-racist educator, as someone who unapologetically speaks about white supremacy, anti-Blackness and Black genius, we see how this work has been dismissed and called “too political.” We see the backlash and protests. Some folks have decided that Black humanity; Black, Indigenous and other people of color (BIPOC); and queer humanity and genius are political. The pushback we get is [that] we need to be neutral.

People will see the potential of education once they realize that every student is someone’s child. Our students are people. They hurt, they laugh, they experience joy, they cry. Instead, I think we continue to think about what’s good for my child, instead of what’s good for our children. We need to move beyond that self-centeredness.

You’ve said that you lost some of yourself to survive in white spaces. How has this experience helped you to realize how someone can “come back to” themselves?

I grew up and went to the same school in the Bronx from Head Start to eighth grade, and I thrived there. Everyone looked like me. I felt safe to be myself. Once I entered into white spaces, I was made to feel inferior. I started to feel like a hollow vessel in my predominantly white boarding school. I was not safe to be Black. I had to assimilate very quickly to be considered successful and acceptable. That continued to happen up until the point where I told the university where I worked that I was leaving to save myself. It’s full circle—now I’m in the moment where I’m returning home, and returning home is returning to me.

In June of 2020, at my former university, I became a victim of a racist attack. I took time off to heal. The distance made me realize how unwell I had been. I realized that my pattern was wake up, go into my white space and fight. During my distance from the university, outside of that toxicity, I realized, “Yo, I have been in a state of unwell for mad long.” Though we have models of people who’ve persevered in these spaces, I just want to be. I just want to rest and relax. That’s also part of our revolution.

Part of my healing also included breaking up with a very narrow version of what success means. For too long, I was made to believe that success only lived in whiteness. I needed to unlearn that.

That’s why we have to create schools where students can believe in their creative genius and not feel like they’re not enough because their genius doesn’t fit into a box that was never even created for them. We really have to ask, “How do we make the world safer for queer and BIPOC? And how do we reimagine a world where we eradicate toxic whiteness and heteronormativity?”

Good teaching includes building relationships, and good teaching is ensuring that the social and emotional aspects of our young people are healthy. However, we’ve talked about SEL more as an outcome. That’s what happens in education: We decide that everything is an outcome, and we have to test to this outcome. As a result, when we start to think of SEL in this very narrow, static way, we lose the dynamism of the work. At LiberatED, the way we think about SEL is that it, like racial justice, like healing, is a process, and we have to focus on the process along with the desired outcome: a world where all children feel safe to thrive in the comfort of their own skin. We also have to realize that superb teachers have always been building relationships, helping students resolve conflict, helping students through difficult emotions.

In this way, we have to honor the genius that already exists within the teaching staff and the educator force who have already been doing this work before we separated it out and called it a thing. SEL and healing should be the air that we breathe in schools, and so should racial justice. Those are all parts of this work. And you’re culturally responsive because culturally responsive practices are, at the core, student centered and community centered. If we paid attention and asked the right questions, then we would know what our students and educators need.

Yes, we want to ensure that everyone is safe, but the argument for bipartisanship and neutrality only comes up when we’re talking about diversity, equity and belonging. We’ve made neutrality a weapon to silence voices at the margins.

How can educators do right by their students if they don’t have the support of administrators and districts? How can they feel liberated in their circumstances?

[School leaders] feel pressure to be bipartisan. Yes, we want to ensure that everyone is safe, but the argument for bipartisanship and neutrality only comes up when we’re talking about diversity, equity and belonging. We’ve made neutrality a weapon to silence voices at the margins. Being neutral is essentially honoring whiteness. It honors the oppressor like Desmond Tutu said: “If you are neutral in situations of injustice, you have chosen the side of the oppressor.” 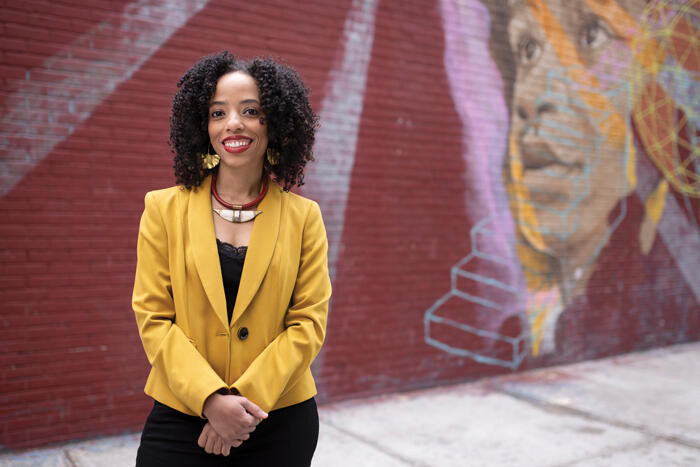 What can educators and caregivers do to sustain healing and help children feel safe in the midst of everything that’s going on in the world—the pandemic, continued police brutality, political polarization and misinformation?

When you help your students or the children that you’re raising feel like they have control and agency and that they can be part of the change they desire, they feel motivated. They feel like they can make a difference.

I don’t know why some people are so scared to admit the ugliness of our country’s racism to themselves, evident in the fervor to ban any talk of anti-racism. A Black teen witnessed and videotaped George Floyd’s public lynching. Yet, we’re saying, “We can’t really talk about it in school.” We’ve decided which children to protect from the world. And Black children are not protected from the world because our Blackness is, unfortunately, treated as a target. When you grow up knowing that you’re a target, you’re always attentive. Your survival depends upon it. That’s why Black children are always learning different ways to maneuver. That’s part of Black genius—and the fact that we’re still here. We ain’t broken. We’re magic.

Can you talk more about LiberatED?

LiberatED centers healing, justice and radical love in SEL to create a world where all children and youth love, learn and thrive in the comfort of their own skin. We aim to disrupt what has always been and to co-create content and resources with communities so that, together, we dream about what could be. We want to ensure that process and practice are the core of our work—rooted in African and Indigenous wisdom. We want collective liberation.

For years, I’ve been working with school districts on healing, equity and racial justice, even before LiberatED. I feel blessed to be doing the work I do. But I’ll tell you it’s not easy. I want someday to feel like I’m not fighting to exist all the time.

What are some of the most valuable lessons about healing and justice that you’ve taken away from your work in education?

Some of what I’ve learned about healing and justice in education is that you can’t do it alone. It is collective work and there’s no self-care without collective care. If I keep going into an unwell society or an unwell setting and I’m doing all of this work to get well, I’m going to get contaminated and poisoned. So, this work has to be done collectively. When we begin to think of this work as collective work, then we begin to think of collective solutions. So, when people say, “It doesn’t really impact me,” you don’t think it impacts you, but it does.

There’s no backing out of this work. If you think you can, then check your privilege. Because if you’re not in education to be part of the revolution for collective liberation and humanity, find another job. 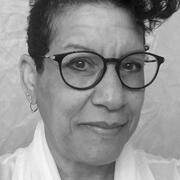 Crystal L. Keels
is an associate editor for Learning for Justice.