Hackberry Hill Pumped Up for Mix It Up

Hackberry Hill Elementary takes its Mix It Up At Lunch day seriously–and so do its kids. They arrived in waves during lunch and recess on Tuesday, eager and ready for fun activities.
Charles Doersch
Teach This in a Learning Plan
X
Add to an Existing Learning Plan
START A NEW LEARNING PLAN
Bookmark Hackberry Hill Pumped Up for Mix It Up
Print 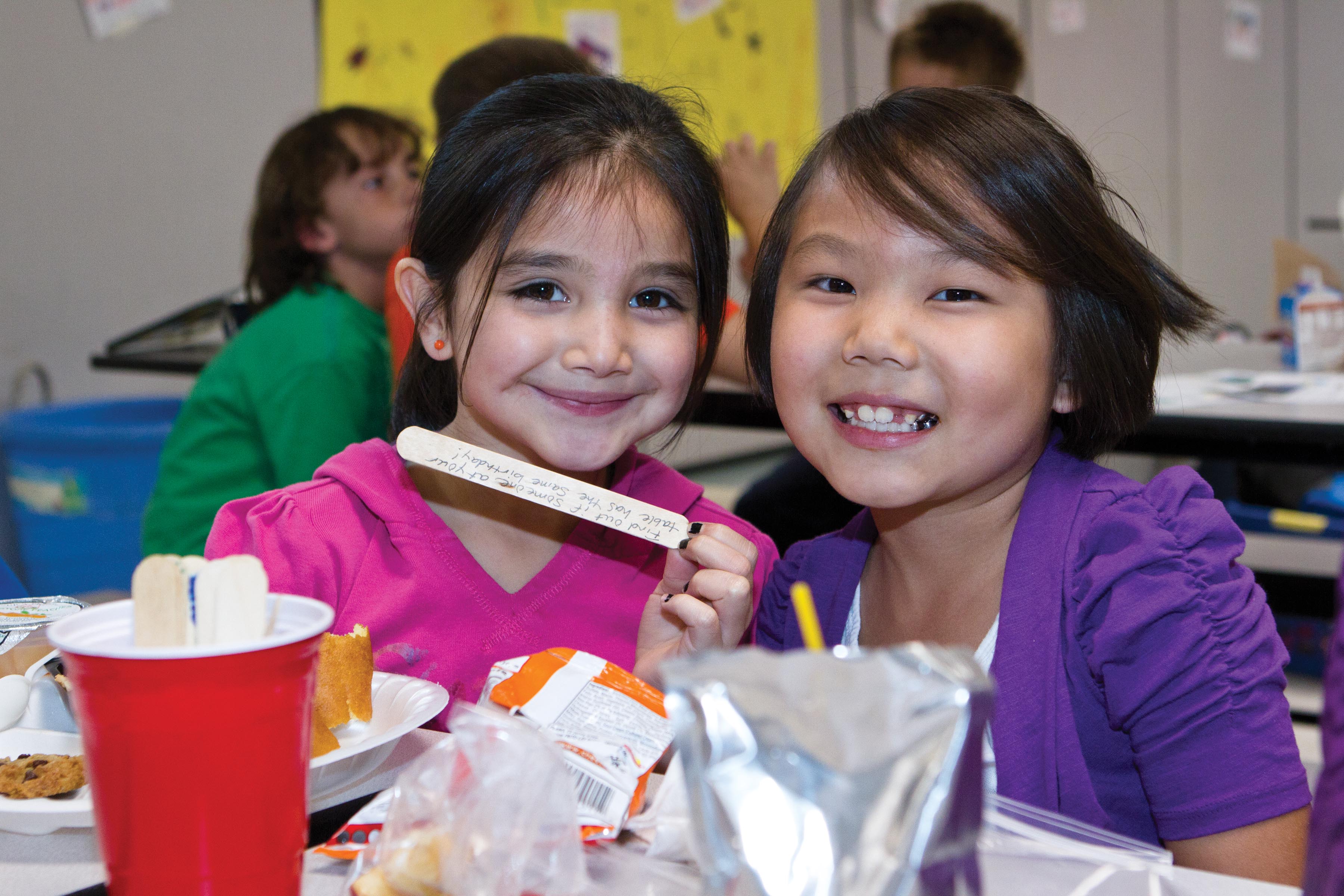 Hackberry Hill Elementary takes its Mix It Up At Lunch day seriously–and so do its kids. They arrived in waves during lunch and recess on Tuesday, eager and ready for fun activities.

“Animals of the World” was the theme this year. Six rows of lunch tables represented six world regions, and colorful informational posters about the animals of that region decorated each table. Clustered in a cup on each table were Popsicle sticks with conversation starters written on them: “What’s the nicest thing someone did for you today?” and “In what ways are we different? In what ways are we the same?”

Hackberry Hill is in Arvada, Colo., just outside of Denver. Even before lunch started, students here knew which table to sit at. Each class came up with its own way to “mix it up” ahead of time. And the students ran cheerfully over to meet the “new” kids they don’t usually sit with.

“Best thing about today is you get to sit by new people,” said second-grader Olivia Garcia.

Next to her, Audrey Johnson held up a Popsicle stick with a question on it: “I asked that boy over there this question: ‘What’s the hardest thing you have to do?’ – and he said ‘Clean my room.’ And that was my answer, too. That’s funny!”

Justin Shaw, another 7-year-old, chimed in: “I love it. I always want to mix it up every day—because that means you can make new friends every day. New kids to play with.”

Classmate Yazlyn Gomez agreed: “This is a great way to make new fiends and have fun with them while you’re getting to know them.”

Third-grader Grant Gonzales, who is on the student committee that organized the fun for Mix It Up, beamed: “We picked numbers to make us meet new people. It’s really working, too.”

Hazel Rex, also in third grade, leaned over and said: “The funniest answer I got today was from the new boy, Broden Schaefer. He said the hardest thing he had to do today was listen to Justin Bieber during our dance party recess!”

Across the table, Broden looked up and nodded his white-blond head. “Yep.” What did Broden think of Mix It Up At Lunch? “Never done it before,” he said. “Pretty awesome, really.” He put his thumb in the air and nodded.

Bridget Feely, 8, said her favorite part of the day so far was dancing the “Chicken Dance” outside with friends and with kids she didn’t even know. “It’s such a silly song. It’s funny!”

Outside the dance party recess was still in full swing, with a boom box blasting as a crowd of first-graders jumped and twirled, kicked and gyrated. Students running out of the school joined the dance—not in cliques or clusters, but “mixed it up” side-by-side with random students. One first-grader in a camo hoodie (who gives his name as “J”) started break dancing to cheering schoolmates.

Students were teaching each other dance moves—and teaching teachers. When Cupid Shuffle started, the kids immediately got the line dance going. When Katie Perry’s Firework came on, everyone sang along and did their best to synchronize moves. But then pandemonium broke out when Justin Bieber’s Baby came on.

School Social Worker Eileen Hunter-Sweeney watched it all with a smile. Mix It Up At Lunch is just one of several programs she oversees that are designed to promote acceptance and consideration.

And by the looks of it, this school mixed it up well. The kids at table after table, and in dance after dance refused to be clumped by race or gender or any other “difference.” They were all in it together–and having a blast.

Charles Doersch is an instructor in the Program for Writing and Rhetoric at the University of Colorado at Boulder.