Every city, town and hamlet has them: monuments commemorating pivotal events; memorials to heroes; parks, schools and public buildings named in honor of someone whose legacy is worth preserving.
Maureen Costello
Add to a Learning Plan
X
Add to an Existing Learning Plan
START A NEW LEARNING PLAN
Print

Every city, town and hamlet has them: monuments commemorating pivotal events; memorials to heroes; parks, schools and public buildings named in honor of someone whose legacy is worth preserving.

Selma, Alabama, is no different. The Edmund Pettus Bridge stands as its most famous commemorative structure. To anyone who was alive during the 1960s, it evokes memories of Bloody Sunday and the Selma-to-Montgomery March. Its namesake, Edmund Pettus, was a lawyer and military officer who served in both the Mexican-American and Civil Wars. Following Reconstruction, he served in the U.S. Senate.

If you want, you can visit Pettus’ grave in the Old Live Oak Cemetery, a city-owned, Spanish-moss-draped pocket of history that sits today among predominantly African-American neighborhoods. Most of its monuments are well over a hundred years old. They are weathered and worn. 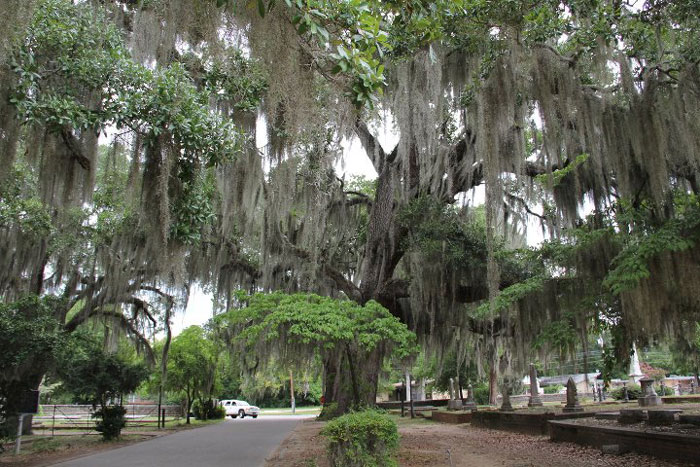 Except for one. A gray granite stone with sharp lines and the bright red, white and blue inlay of the Confederate battle flag. This is the monument to Nathan Bedford Forrest, Confederate general and first Grand Wizard of the Ku Klux Klan. It is only 12 years old.

Opposition and outrage has been a more-or-less constant thread of the monument’s story in this small city, where 80 percent of the population is African American. Following the March disappearance of the bronze bust that sat atop the 7-foot pedestal, Friends of Forrest, the group that built the monument, hatched plans to replace the bust. The United Daughters of the Confederacy want to add a protective fence, an elevated platform and install night lighting. Opponents, who prefer that Selma be remembered for its role in the civil rights movement, have started a petition demanding that the City Council remove the monument once and for all.

It raises the question: Just what is a memorial for, anyway? And does it really matter?

According to Sanford Levinson, professor of law at the University of Texas in Austin and author of Written in Stone: Public Monuments in Changing Societies, it matters very much.  Statues, he says, “are an effort [by regimes in power] to project legitimacy into the future.” If nothing else, he says, controversies like these call on us to ask ourselves exactly what we’re honoring, and why. 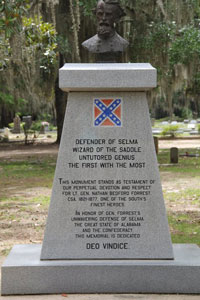 For those who don’t know much about Forrest, here are the highlights. He made a fortune as a planter, real estate investor and slave trader. Possessed of a brutal temper, he served as a lieutenant general during the Civil War and killed more than 30 men in close combat. At the Battle of Fort Pillow in Tennessee, outraged by the Union’s use of escaped slaves, he presided over the massacre of more than 250 black soldiers, woman and children who had surrendered. After the war, he became the leader of the Klan.

Looking at Forrest’s whole record—he was “a trafficker in human beings … a traitor to the United States … a war criminal —is reason enough to disqualify anybody from receiving a public memorial today,” says Hasan Jeffries, professor of African-American history at Ohio State University and on the faculty of the Kirwan Institute.

The message to today’s Selma youth is unmistakable: racism and dehumanization, even if it was in the past, is acceptable and admirable. It may be passed off as honoring heritage, but it is far from honorable.

Levinson points out that Forrest was no Robert E. Lee, a soldier who accepted the outcome of Appomattox and focused the rest of his life on reconciliation. “Forrest did not move on; he led the insurgency,” Levinson said. “He was exactly the person who, in Iraq, would have been firing bombs on American soldiers, who were an army of occupation.”

Why then, do some white Southerners today continue to celebrate men like Forrest, despite their terrible failings? Jeffries believes the answer lies in personal history and identity. “So much of the personal identity of white Southerners has historically been wrapped up in Confederate mythology and implicit notions of white supremacy that to reject the Confederacy today would mean to turn one’s back on one’s own family—to find fault not only with oneself, but with one’s parents, aunts, uncles, grandparents,” he explained. “They held these falsehoods as near and dear truths. It would mean admitting to living a lie.”

“These are some of the most difficult and uncomfortable things for people to do,” he added.

Coming to grips with our history, and thinking long and hard about the message we want to send into the future, is difficult, but necessary, work. Asked about the memorial, civil rights veteran and emeritus member of the Southern Poverty Law Center’s Board of Directors, Julian Bond said, “Distorting history is never a good idea. Celebrating a domestic terrorist like Forrest is a terrible idea. Selma has much honest history to celebrate—it ought to stick to the truth."