Civil Discourse in the Classroom 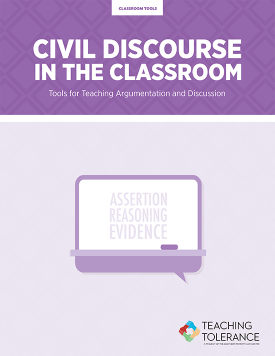 On the last National Assessment of Educational Progress in writing, given in 2007, only 26 percent of 12th graders were judged to be “excellent” or “skillful” at persuasive writing, which may or may not entail making an argument. Another 34 percent were rated “sufficient,” and 27 percent generated “uneven” performances. Test-scorers rated the rest as either “insufficient” or “unsatisfactory.”

An Argument for Democracy

Democratic societies thrive on dissent, discussion and debate. Too often, however, our society provides poor role models for children (and adults) trying to learn the skills to be effective, active and responsible participants in that democratic society. On FOXNews, for example, children learn that people interrupt, talk over and insult each other when they debate issues. Flip the dial to C-SPAN, and these same children learn that “debate” is scripted and unengaging.

Young children experiment with having and voicing opinions. These are usually opinions they have overheard at home or in their communities. Public schools have the potential to expose children to multiple and diverse perspectives on a variety of issues, enriching their social and personal lives while planting the seeds for an enlivened democratic society.

These lessons provide a way for basic argument literacy to be integrated into any classroom. Students of all ages, backgrounds and skill levels are able to learn the basic tools for argumentation. Once they learn these tools, it becomes easier to build discussion and deliberation into daily classroom activities. Many students also find that practice in structured argument dramatically improves their ability to read and produce persuasive writing.

This chapter introduces the two most basic skills (Meany and Shuster, 2002) in the persuasive communication toolbox:

These two tools, combined with the ideas discussed in Chapter 1, will lay the groundwork for productive, reasoned and lively discussions on a variety of topics. They also will give students “training wheels” for learning how to have reasoned arguments outside the classroom.

In any class for any discussion it can be helpful to have ground rules in place. Such rules usually work best when they are generated and agreed up by the participants themselves. Under the umbrella of civil discourse, these rules might be approach as a classroom constitution of sorts – guidelines that govern their classroom discussions. After these civil discourse lessons have been completed (or at key points during the process) it might be good to revisit the ground rules to see if there are any amendments to be considered. (See Chapter 3 for more on ground rules.)

The Parts of An Argument

Everybody has opinions about the world. Sometimes these opinions are about very basic and personal preferences, such as what flavor of ice cream is the best, or whether cats or dogs make the better pet. Other opinions are about local, regional, national or international issues. When we vote for a candidate in an election, we are expressing an opinion about who is the best person to hold an office – or, in some cases, who should not hold office.

One of the major tasks of education is to teach students how to form and support their opinions. Writing instruction offers the “five-paragraph essay” to encourage students to begin to formalize their ideas using the tools of thesis and support. In science and math, students learn to advance theories that can be proven or disproven. English teachers lead discussions about poems or stories where students might have multiple, differing interpretations of the work. All of these exercises teach students to form, shape and defend arguments.

Three Parts of an Argument

To be complete, arguments should have three parts: an assertion, reasoning and evidence (easily remembered with the mnemonic ARE).

An assertion is usually a simple statement, such as “Homework is a waste of time,” “Television news is boring,” or “Tomato soup is better than grilled cheese sandwiches.” An assertion is the thesis statement or the main point of an argument.

Reasoning is the “because” part of an argument, as in the following examples:

Reasoning can be simple or complex, but when working with students who are new to this process, the most important things to emphasize are the use of the word “because” as a cue and the need to connect the statement and the reasoning. Some reasoning will always be better than others, but for beginning students it is useful to focus on the basic skill of linking reasoning to an assertion rather than critiquing the validity of the reasoning right away.

Just as reasoning supports an assertion, evidence supports reasoning. There are many different kinds of evidence, ranging from expert testimony or statistics to historical or contemporary examples. As students learn the ARE framework for argumentation, it is helpful to encourage them to begin with the most basic and common form of evidence: the example. This also allows students to practice the verbal cue “for example.”

Teaching students the importance of evidence isn’t easy in a culture that doesn’t prioritize evidence. From influential ideas circulated on television and in news magazines to letters to the editor in smaller newspapers, evidence is in short supply. Many arguments rely on appeals to emotion rather than evidence; others simply assume that reasoning will speak for itself and there is no need for evidence.

By working to overcome that societal deficit, we also find ways to combat stereotypical beliefs. When students learn to prioritize and critically investigate the evidence for ideas, they are more likely to question stereotypes and engage in arguments based on the content of the arguments themselves rather than the character and nature of people advancing the arguments. Students learn to focus their discussion on facts rather than emotions, acquiring important skills for civil disagreement at the same time that they are building critical thinking and reasoning skills.

Here we are focusing solely on introducing the need to have evidence. This obviously sets aside the question of the quality of evidence, the source of evidence and other questions of validity. As students practice disagreement, debate and discussion, they also can be taught not just to include evidence in their arguments, but to make sure the evidence they use is solid and reliable.