Explore the History of ‘Loving’ 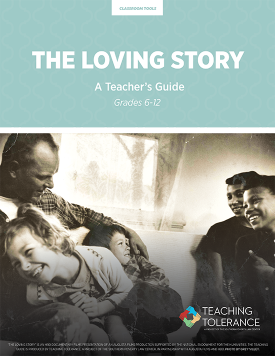 The Augusta Films documentary The Loving Story recounts an important and often-overlooked element of the struggle to end racial segregation in the United States. Mildred and Richard Loving, married in 1958, were arrested because he was white and she was part African-American and part Native American. In Virginia, where they lived, their marriage was illegal. Their desire to live together as husband and wife in their home state led to a Supreme Court ruling that declared state laws that prohibited inter-racial marriage unconstitutional.

Learning for Justice (then Teaching Tolerance) produced a Teacher’s Guide for middle, high school and college students who will see The Loving Story. The interdisciplinary teacher’s guide will be aligned to national standards, including the English Language Arts Common Core.

The teaching guide includes four lessons. The first enables students to understand the historical context of the Lovings’ fight by exploring the time period and the socio-political environment. The second delves into the question of rights as they apply to the individual and to the power of the states—both important in this case. The third puts students along the path of the legal process, as the Lovings made their way through state and federal courts. In the fourth, students explore how activists can move us forward toward a more inclusive nation.

The Lovings did not consider themselves to be activists. They simply wanted their family to live together legally. Yet they rose to the challenges that their personal quest raised. The Lovings show us that we can all make a difference. We can all help to bring about positive change. Both The Loving Story and this teaching guide, call us all to action.

The Loving Story premieres on HBO on a date that symbolizes and celebrates love. Visit the film’s website for additional information and a broadcast schedule.