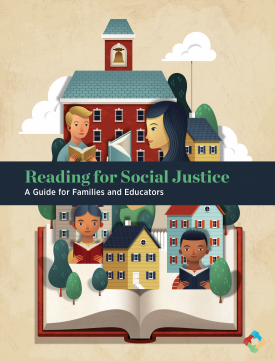 This section of the guide describes three different social justice reading groups. These groups will give you a sense of the different structures and approaches families and communities are using to read and talk about social justice.

Each spotlight includes a short narrative describing the group, followed by a sample agenda for each group. Please note that these documents were created retroactively; this guide was designed in part based on how these communities structured and organized their groups.

Read on for more information about:

Using the guide? Give us your feedback!

The Social Justice Learning Space, a diverse community of families and children, meets monthly in Boulder, Colorado. The group formed in 2016 when a group of adults—professors and staff in the School of Education at the University of Colorado, Boulder—came together to create a space where they could talk with their children about social justice. One parent explains that the group was formed, in part, as a response to an uptick in hate and bias speech following the 2016 election.

“Our 9-year-old daughter came home asking what a swastika was and what it meant to Jewish families like ours after a friend drew one at school and told her it was no big deal. I might do equity work for a living, but I was at a loss when it came to handling this in such an ongoing, emotional way,” she said. Including both single- and multi-generational households, the group brings together readers of different races, religions, immigration status and sexual orientation.

The group began with 14 members from six families. They decided on a collective reading structure.

They decided their group would explore social justice issues and, importantly, that the kids were responsible for selecting all of the topics. Their parents or guardians would then work with them to decide on texts and activities. Each session had three parts: a text discussion, an engaging activity and a way to take action. They learned about a range of topics, such as refugee experiences, immigration, the role of art in activism, Japanese internment, school segregation, the women’s rights movement and the American civil rights movement.

Although they didn’t always use the language of the Social Justice Standards, the group’s goals regularly aligned with one or more of the 20 anchor standards, and meetings tended to focus on one or more goals tied to identity, diversity, justice and action.

For their activities, adults and kids worked together to plan and lead the meetings, often drawing from Learning for Justice’s strategies or looking online for activities to adapt for the group. Meeting leaders emailed the group members before each meeting to let families know the plan and how they should prepare.

Because the children in the group varied in age and reading level, participants chose their reading from a list of texts developed for each meeting. The reading took place outside of group time (although all group members brought their books to the discussion and occasionally shared a passage or section of the book, reading aloud to the group during discussion).

When constructing the list of possible texts for each meeting, families made sure to include a wide range of “mirrors” and “windows,” often including texts about young people. These texts represented many genres, including films, stories, biographies, autobiographies and more. 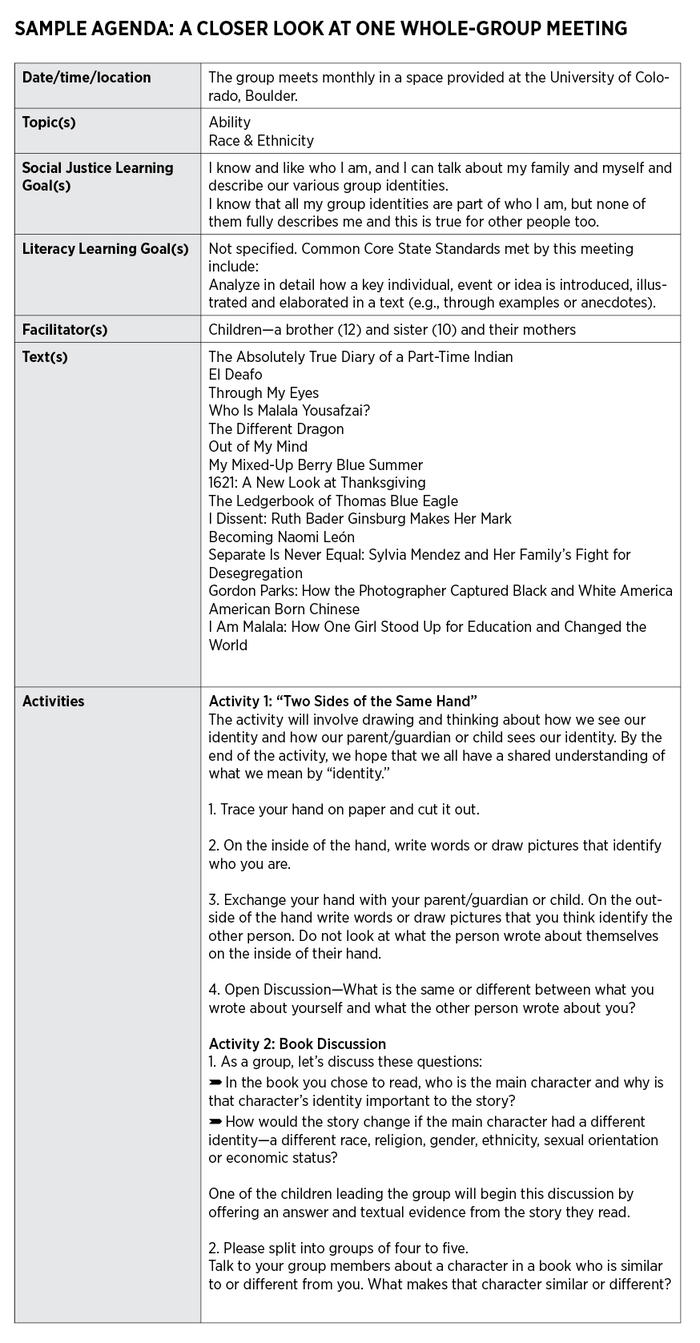 Elementary school teacher Manuel Martinez knew there was more to family involvement than school visits and PTA meetings. So when he developed a reading group for his second- and third-graders, he kept their families in mind. Over the course of six weeks, Martinez and his students dedicated some of their class time to reading aloud together. Then, the kids went home to read and discuss the same texts with their families. Their project had no name, but it did have a single topic, one Martinez had chosen specifically for their community: migration.

After their shared reading, children asked family members about their own migration experiences, how and when and why they moved into and within the United States. They asked for stories from parents and grandparents, friends and neighbors, recording family and community histories in their own words. Even before all the families came together for a potluck in his classroom, Martinez began to notice a shift in his students. “They wanted to participate, they wanted to raise their hands, they wanted to make their voices heard,” he said. “It really changed the dynamic of the classroom.”

The group included Martinez, his 20 students and each of their families. It relied on a parallel reading structure.

The goals for the group were multiple: Martinez wanted to find ways to involve families more closely in the work of his classroom, and he wanted to help students build literacy and writing skills, specifically paraphrasing. The social justice goal was clear: Members of the group would expand their knowledge of migration by considering how recent or long-past histories of migration or immigration had shaped their own (and family) identities, and by learning more about the diversity of experience contained in the term migration.

Although they didn’t use the language of the Social Justice Standards, the reading group focused on several learning outcomes in the Identity and Diversity domains. In class, Martinez relied on read-aloud activities, followed by discussion. Together, the children and their teacher decided on the questions children would ask their families. At home, meetings included read-aloud activities followed by one-on-one discussions. Children asked the questions they developed in class, then wrote down their families’ answers.

In the whole-group meeting, families and children came together with Martinez in his classroom. Families shared their stories with one another, reflected on the experience of reading together with their children and shared a potluck meal together.

Because nearly all of his students came from families with histories of migration into or within the United States, Martinez selected texts that mirrored those experiences. To ensure that all families had access to the texts, he chose books in English and Spanish. 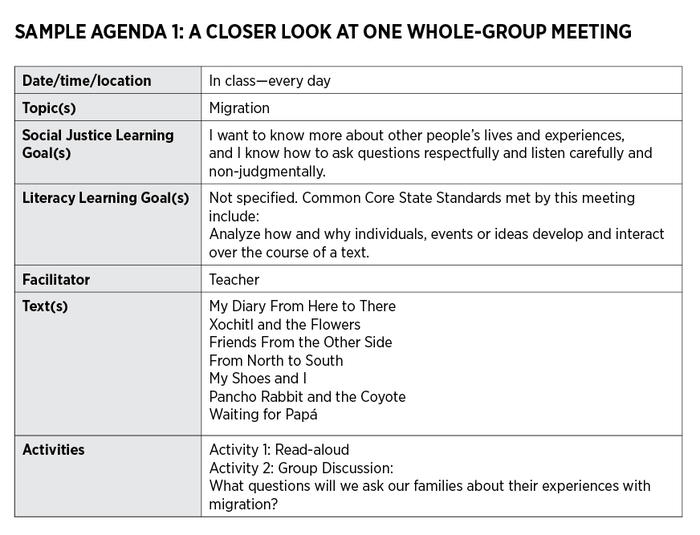 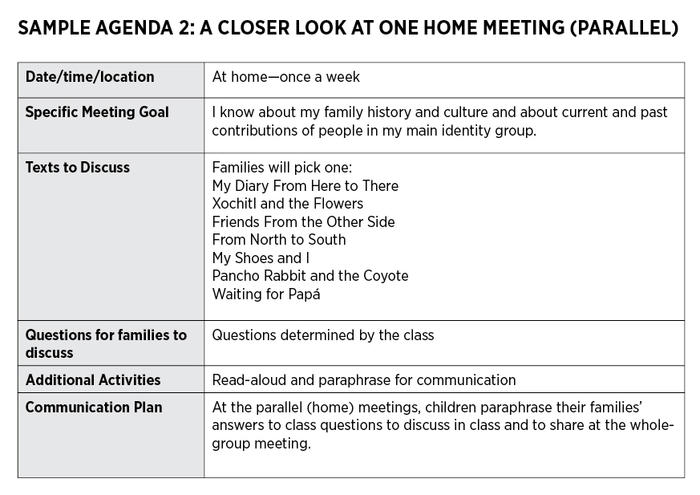 When Chris Hass explained to his second-grade students that they’d be talking about reading with their families, the kids were ready to go. They’d been reading together in class for a while, and they had plenty of practice discussing texts with social justice in mind. Now, it was time for Hass to step back and let the children lead their families through discussions of the text.

Hass designed and facilitated the group, but the main participants were his students and their families; he wanted the children to lead. Because the students recounted in class small groups the conversations they’d had with their families, this arrangement is a mix of class and home reading group structures.

The goals for the group were relatively straightforward: Children and families extended their understandings of justice and action by reading to see how characters in their texts recognized injustice—even when it was framed as “normal”—and how those characters took action to disrupt it. While everyone shared the same lens, the topics varied. Some children and families read about injustice related to gender, others about race or ability.

The meeting outcomes revolved around justice and action, particularly Social Justice Standard 12: “I know when people are treated unfairly, and I can give examples of prejudice words, pictures and rules.” In their readings and discussions, students not only learned how to recognize injustice—they also learned that, because injustice sometimes becomes the “norm,” we need work with those who take action against it.

Hass selected several texts for the reading group, a mix of informational texts and fictional stories. Between three and five children read and discussed each text with their families. The texts he chose included a wide range of “mirrors” and “windows,” often including texts about young people. These texts represented many genres, including films, stories, biographies,
autobiographies and more. 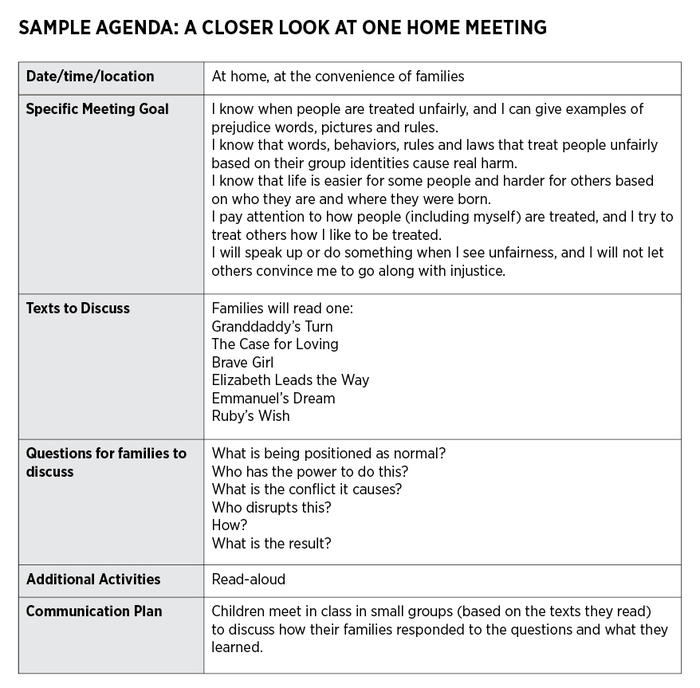