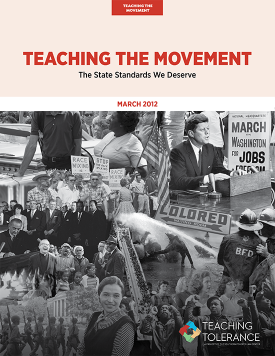 The State Standards We Deserve

Our September 2011 report, Teaching the Movement: The State of Civil Rights Education in the United States 2011, was prompted by the news that American high school seniors knew little about the civil rights movement. Knowing that low expectations often contribute to poor student achievement, we took a close look at the content requirements set by each state. Our study showed that most states failed to require teaching about the civil rights movement, an important part of our shared history. We called for states to improve their standards and raise expectations of what students should learn. In this report, we offer models for improvement.

In our initial report, we graded states on the scope and quality of their standards for teaching about the civil rights movement. The 51-state report card told a disturbing story. Across the country, state history standards—the expectations about what students learn and teachers teach—routinely ignored or over-simplified the struggle for African- American civil rights that took place in the 1950s and 1960s. The farther away from the South—and the smaller the African-American population—the lower the expectations for significant coverage.

Too often, we found, the movement, when it is given classroom time, is reduced to lessons about two heroic figures—Martin Luther King and Rosa Parks—and the four words, “I have a dream.”

We found that only a handful of states required educators to pay significant attention to the movement and the lessons it can teach about citizenship. Over 30 states required minimal or even no instruction; many had standards that barely went beyond a superficial treatment of events and leaders. Overall, we noted that, in almost all states, there is tremendous room for improvement.

The report ended with a call for a national conversation, for teachers to be better prepared to teach the movement and, most importantly, for states to integrate a comprehensive approach to civil rights education into their curricula. States, we argued, had to set high expectations for achievement by adopting rigorous and rich standards.

State educational leaders need productive models. In this paper, we move from diagnosis to treatment. We drew from an array of state standards to identify best practices and provide four sets of model standards. We hope that policymakers and interested advocates will use these model standards to push for reform of the history standards in their own states.