Teaching the Movement 2014
Our Approach

The United States has no national content standards for history. In recent years, states have joined with the National Governors Association Center for Best Practices and the Council of Chief State School Officers to develop and promote the adoption of Common Core State Standards (CCSS) in English/language arts and math. These standards have now been adopted in 45 states, the District of Columbia, Guam, American Samoa and the U.S. Virgin Islands. The new College, Career, and Civic Life (C3) Framework for Social Studies State Standards mirrors and supplements the Common Core. This framework, like the Common Core, is not about what students should learn but about how they should learn.

Because there is no national set of core content standards for history, the only way to measure the nature of our common expectations about student knowledge of the civil rights movement is to look at state standards and resources. These documents have substantial practical and symbolic value.

As a practical matter, state standards may be reflected in testing and accountability mechanisms as well as in instructional materials, teacher training, and professional development and textbooks (particularly in larger markets like Texas and California, whose decisions traditionally shape textbooks sold in smaller markets all over the country).9 Symbolically, a state’s standards and resources make a strong statement about the shared knowledge considered essential for residents of that state. Just as teachers set expectations for their students, each state sets expectations for its education system—its largest expenditure as well as its best investment in future prosperity.

But as much as state documents tell us, they leave many important questions unanswered. There is no straight line between state departments of education and the classroom—no serious person thinks that official state standards and resources dictate the whole (or even most) of what teachers teach. Even though this study improves upon our 2011 approach by looking at the resources that states offer, it still leaves us to guess at how the civil rights movement is taught. Surveying state resources, we found a rich variety of guidance. Model lesson plans suggest strategies such as using original historical documents, engaging in role-play or interviewing community members. It would be remiss of us, however, to take these recommendations as anything other than well-meant advice.

Realistically, when we examine state standards we learn only what states expect students to learn. When we look at educational resources, we see the guidance that states offer. Standards are not necessarily followed and resources are not necessarily used. We simply do not know what students are learning about the civil rights movement. Even if we were to see detailed state standards covering the civil rights movement (and the Fordham report shows that even those states with otherwise detailed standards tend to shortchange the ones for events after World War II), these frameworks are not meaningful without testing and accountability—all too often lacking in history assessment, in particular.

Despite these limitations, this report examines state standards and resources because those documents represent the expectations that states set for their students and the support offered to teachers. If there is any single finding that has held true in educational research over the last 100 years, it is that high expectations are necessary for high achievement. When states say that a significant event like the civil rights movement is not essential content, or that it should be studied in only a superficial manner, why would we expect students—or teachers—to draw different conclusions?

The 2011 report used a microscope to examine state content standards. The 2013 report pulls the lens back to look at the full array of state documents and initiatives available to teach the movement. The new approach gave us a broader sense of state requirements and instructional suggestions, while identifying outstanding resources and promising practices. We measured two areas in each state: the major documents and supporting resources. The major documents include state content standards as well as the frameworks and supporting documents officially designated to support implementation of the standards. In general, these documents are easily located on state websites. This study examines all current and available state standards, frameworks, model curricula and related documents archived on the websites of the departments of education of all 50 states and the District of Columbia. It focuses on standards for social studies, social science, history and related subjects like civics or geography. Any mentions of the civil rights movement in English language arts standards or standards for other subjects are omitted by design.

Wherever possible, this study identified the standards that will be used in the 2014-2015 school year for each state’s social studies divisions. All grade levels were examined. To engage states in a conversation about their materials, we surveyed state superintendents, curriculum specialists and social studies professionals beginning in April 2013. Through the fall of 2014, we communicated closely with them to ensure that we were getting the best possible picture of the range of efforts and documents put forth by state officials.

The supporting resources include other materials provided by the state’s Department of Education to teach the civil rights movement. Rather than use keyword searches that might overlook core concepts or ideas and leave out essential context, we read all related documents for all states. This study substantially adds to the 2011 report by examining the supporting documents at every state level rather than looking only at requirements. This means it is the first study to provide a comprehensive look at state standards and resources for studying the civil rights movement.

With an expanded focus on guidance given to classroom teachers, the 2014 grades more accurately represent the weight states give to the civil rights movement. The major documents—standards and frameworks—account for 60 percent of a state’s grade. The supporting resources account for the remaining 40 percent. Standards and frameworks are aspirational and symbolic, often forged in a political process that limits the influence of the professional educators at state departments of education. In local-control states, where curriculum is left to local districts, state standards are minimal or nonexistent. By giving weight to supporting resources, we recognize the efforts made by state departments of education to support the teaching of the movement.

After the 2011 report, we listened to criticisms that suggested that standards didn’t tell enough of the story. We spoke with teachers and educational leaders in the states who told us that they rely on these additional resources, and we changed our methods accordingly. Table 2 summarizes the methods we used to arrive at a state’s final grade. A full description of the methods is in Appendix B.

The new methods used here were designed to reward states with outstanding supporting resources, even when the corresponding state standards might be “dismal,” to use the language of the 2011 report. Even so, because of our more-detailed approach, we awarded A grades only to states scoring in the 80th percentile (up from 70 percent in the 2011 report). As we broadened our lens, we also raised the bar. 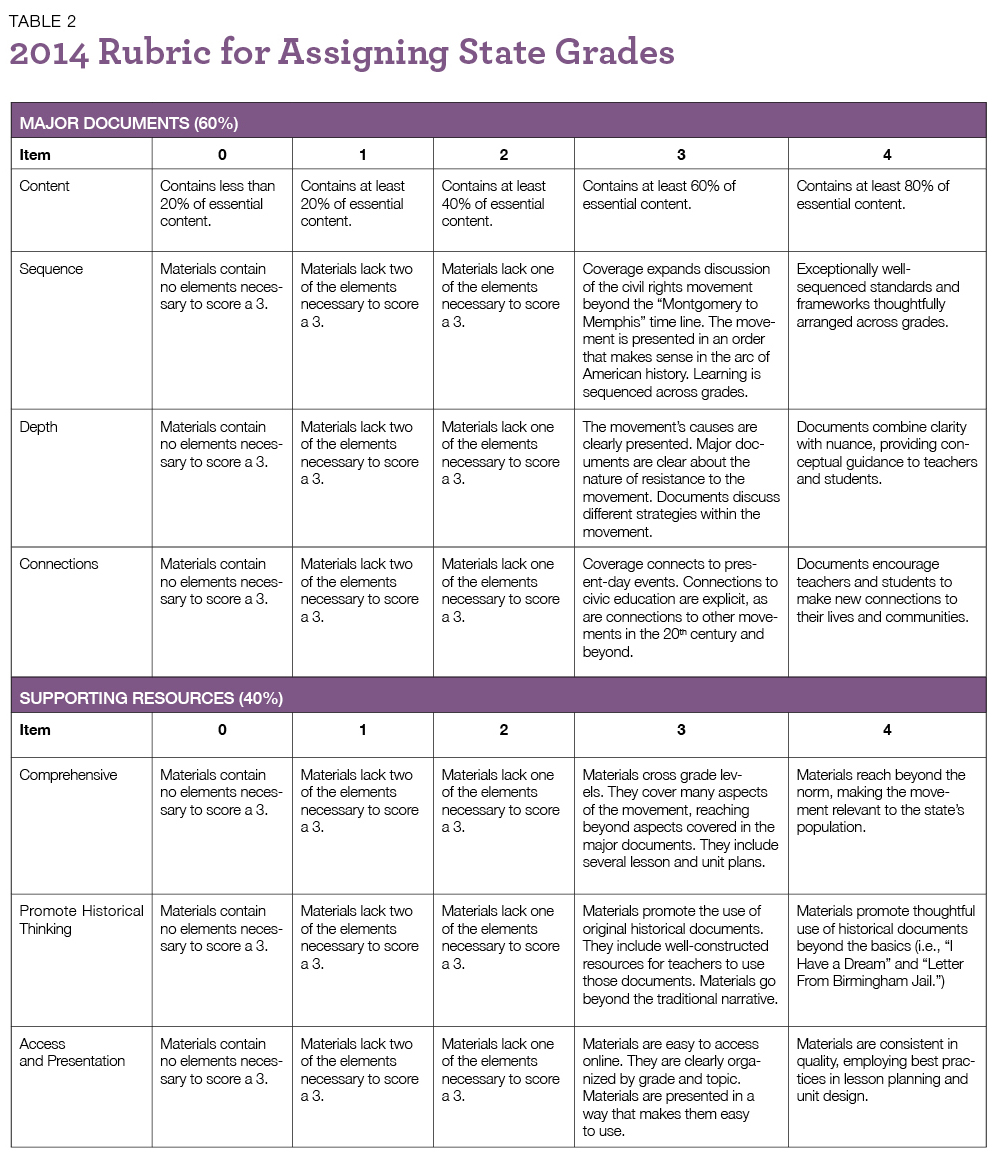