The Civil Rights Movement: Why Now? 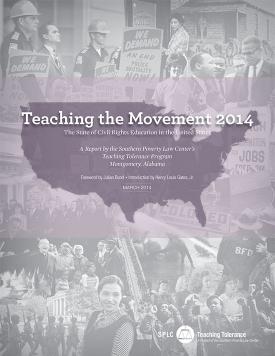 Teaching the Movement 2014
The Civil Rights Movement: Why Now?

“Often cast in a ‘Montgomery to Memphis’ frame that parallels the public life of Martin Luther King Jr., the Civil Rights Movement has taken on an air of inevitability in the popular imagination. Images and film footage have frozen the movement in time as an era when people risked their lives to end the crippling system of segregation in the South, and to secure the rights and privileges fundamental to American citizenship. For many young people, it looms as a shining moment in the distant past, with little relevance to contemporary issues concerning race, democracy, and social justice.”

The civil rights movement is one of the defining events in American history, during which Americans fought to make real the ideals of justice and equality embedded in our founding documents. When students learn about the movement, they learn what it means to be active American citizens. They learn how to recognize injustice. They learn about the transformative role played by thousands of ordinary individuals, as well as the importance of organization for collective change. They see that people can come together to stand against oppression.

We are concerned that the movement, when it is given classroom time, is reduced to lessons about a handful of heroic figures and the four words “I have a dream.” Students need to know that the movement was much bigger than its most notable leaders, and that millions of people mustered the courage to join the struggle, very often risking their lives in the process. They need to know that the dream to which Dr. King gave voice has not yet been fully realized, despite the election of an African-American president. They need to know that as long as race is a barrier to access and opportunity, and as long as poverty is commonplace for people of color, the dream has not been achieved.

We are also concerned about the historical narrative promoted by some pundits and political figures who would deny the nation’s legacy of institutionalized oppression. There is tremendous pressure from the political right to teach a wholly false history that ignores the nation’s blemishes and misrepresents struggles for social justice. In this revisionist version, the framers worked tirelessly to end slavery, the nation was perfect at birth, and states’ rights—not slavery—was the motivation behind Southern secession. Together, these interpretations deny the everyday reality of millions of today’s students—that the nation is not yet perfect and that racism and injustice still exist. This narrative also ignores the agency of people of color and denies the need for group action to promote social justice.

Beyond being false, these narratives are no longer persuasive to many of our students. Teaching the civil rights movement is essential to ensuring that American history is relevant to students in an increasingly diverse nation. Terrie Epstein’s research has shown that students enter classrooms with preexisting worldviews that differ, often dramatically, depending on race, ethnicity, class and other demographic factors.3  Students whose real-life experience suggests that history is being “white-washed” are unlikely to accept lessons to the contrary. These worldviews are very difficult to dislodge, especially when the standard narrative used to teach the civil rights movement is simplistic or distorted.

What we know about civil rights movement instruction is not promising. We know that textbooks and core materials too often strip out context and richness to present a limited account of the movement.4  We know that no comprehensive content standards exist for teaching about the movement. We know that even the most experienced teachers of U.S. history tend to rush to the finish line once their courses pass World War II. In 2011, when we examined state requirements, we were shocked to learn that 16 states did not require any instruction at all about the civil rights movement. This year, we decided to dig deeper—in addition to identifying areas for improvement, we sought models for the rest of the nation.

This report continues our call for change. The United States has a civic and moral imperative to ensure that all children learn about the history of the civil rights movement. As Jeremy Stern notes, “Today’s students need to actively learn what older generations either lived through or experienced as a strong part of their cultural surroundings: Even basic knowledge of the civil rights movement cannot be taken for granted among today’s children.” As the movement recedes from recent memory into history, it is more important than ever to assess the state of learning and teaching about these quintessential American events.

For a decade, we have been in the midst of anniversaries, commemorations and memorials of the civil rights movement. As movement figures die or withdraw from the public sphere, the struggle for civil rights will recede from active memory into historical memory. While there has never been a unified understanding of the movement, the disappearance of key actors brings risks that its lessons will be simplified and ultimately lost to students and society.

In many ways, the civil rights movement has been separated from a “movement” for quite some time.5  Popular narratives create the impression that a small group of charismatic leaders, particularly Rosa Parks and Dr. Martin Luther King Jr., were primarily responsible for civil rights gains. Parks is justly venerated for her activism in triggering the Montgomery Bus Boycott. Yet too many depictions of her portray a lone woman who was simply tired and did not want to give up her seat on a bus to a white person. In reality, she was a trained participant in a well-organized social movement.

The reduction of the movement into simple fables obscures the broad social, institutional and personal sacrifices of the people who engaged in the struggle. The King-and-Parks-centered narrative limits what we teach students about the range of possible political action. Students deserve to learn that individuals, acting collectively, can make powerful institutions change.

We should be just as concerned that the civil rights movement will be recast in a conciliatory frame. “[T]here is a powerful tendency in the United States to depoliticize traditions for the sake of ‘reconciliation,’” writes historian Michael Kammen. “Memory is more likely to be activated by contestation, and amnesia is more likely to be induced by the desire for reconciliation.”6  Kammen observes that King’s image has been depoliticized, turning him in the eyes of the public from a radical antipoverty activist into a charismatic integrationist. Small wonder, then, that it is now commonplace for some politicians and media figures to use King’s words about a color-blind society as a wedge against expanded opportunities for people of color while drawing a curtain across contemporary injustices.

Teachers and textbooks routinely avoid conflict and controversial issues while creating what Terrie Epstein has called “sanitized versions” of important national events—slavery without enslavers, struggles for civil rights without racism and resistance—all culminating in a national triumph of good over evil.7  “As a consequence of teaching a disingenuous national history,” writes Epstein, “millions of young people leave the public schools knowing a nationalistic perspective but not believing it, while those who accept it have no framework for understanding racism and other forms of inequality today.”8