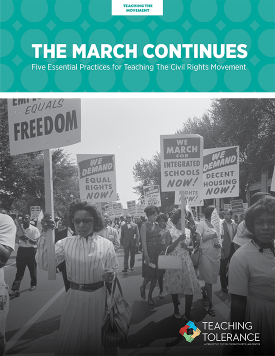 Because the civil rights movement is so often condensed into two names (Rosa Parks and Martin Luther King Jr.) and four words (“I have a dream”), students can discover much that is usually unseen. When teachers capture the unseen, they open doors for students to enter and explore.

Capturing the unseen helps teach the civil rights movement because it engages students in the process of discovering knowledge. Students see that the movement—and much knowledge—is a “living thing.” It is not only their journey of discovery; scholars, too, continue to map its contours and fissures. When students are producers rather than simply passive receptacles of knowledge, they are more likely to show interest and retain information.

The unseen wider civil rights movement brings female civil rights leaders out of textbook sidebars and places them at the center of discussion. It focuses the classroom’s lens on such places as Sunflower County, Miss.; Albany, Ga.; and Wilson, N.C., to see how the freedom struggle was understood differently in diverse places. The wide civil rights movement reveals what is often obscured by textbooks’ focus on court victories and federal legislation, what University of Texas historian Laurie Green has called the “equally hard-fought struggles centered on home, work, family, and community—areas of daily life commonly perceived as outside the realm of political conflict.”13 A wider civil rights movement includes the entire nation, as students learn that prejudice and struggle were not limited to the South.

The idea of a longer civil rights movement pushes back against the Montgomery-to-Memphis frame. Teachers opening this door will find the rich roots of the movement stretching back into Reconstruction. A. Phillip Randolph and organized labor, Paul Robeson and music, and the Tuskegee airmen are all behind this door. Students learn about coordinated resistance to the 1964 Civil Rights Act, including dramatic increases in extrajudicial violence. They examine the reasons for urban rebellion in the “long, hot summers” in places like Watts and Detroit, consider the recommendations of the Kerner Commission, and evaluate the trajectory of the Black Panther Party.

Including the stories of individuals outside the familiar list of movement heroes and villains can help students follow the movement’s complicated path while illuminating broader issues. Testimonies can personalize history and help students understand the thoughts, experiences and motivations of people in the past. Students should listen to or read personal accounts of movement activists, including testimonies of young people, like the ones anthologized in Freedom’s Children.14 Mercer University’s Sarah Gardner writes that these autobiographical accounts help students “gain an appreciation for the struggles, hardships, victories, defeats, possibilities, and limitations of civil rights on an intimate level … personal narratives can also help students reconceptualize and expand the traditional story of the movement by forcing them to rethink chronology. In doing so, students also bear witness to the daily travails of ordinary people, hear the voices of white and black women, and confront the psychological and social turmoil experienced by activists … In the end, personal narratives provide students with the messiness of history by offering them alternative and often competing versions of struggles for freedom.”15

Students might learn about Viola Liuzzo, killed in 1965 by Klansman Collie Wilkins. Gary Rowe, an FBI informant, was riding with Wilkins that night. Liuzzo had driven from Detroit to Alabama after seeing photos of activists beaten in Birmingham. This single mother was shot after ferrying marchers to Selma but was not celebrated as a white civil rights martyr the way Michael Schwerner and Andrew Goodman (killed in Mississippi a year earlier) were. When the classroom’s lens focuses on Liuzzo’s story, students might ask, “Why not?” Hassan Kwame Jeffries explains that the FBI circulated defamatory rumors about Liuzzo because they worried about exposing the fact that their informant was an accomplice to her murder.16 Exposing students to the unseen workings of the federal government’s efforts to infiltrate and monitor both the Ku Klux Klan and the civil rights movement means opening doors to interrogate the limits and appropriate uses of federal power.

Original historical resources are essential because they include multiple perspectives often left out of textbooks’ summarized accounts. When students encounter artifacts from the past, they engage actively to interpret history. To visualize the reaction to Birmingham protests, students should look at the pictures of snarling dogs and fire hoses that transfixed a nation. Students can listen to participants through oral history projects, many of which are currently underway and are increasingly located online. They can find the history of the civil rights movement in their own communities, even in places where a connection to the movement might not be obvious. Sarah Anderson, a teacher in Portland, Ore., set up a scavenger hunt in consultation with local historians to help her students discover connections between the civil rights movement and their city. She writes that this “gave us the opportunity to learn more about ourselves, our place and the future we want to build for ourselves.”17

To the extent possible, try to stay abreast of the growing scholarship produced as a new generation of movement historians, such as Hasan Kwame Jeffries and Emilye Crosby, dig deeper and work locally to tell stories that simply have not yet been told.

Finally, explore hidden dimensions of the well-known by giving students a rich sense of context. As the University of Cincinnati’s Keith Barton argues, “students will be able to interpret Martin Luther King’s ‘I Have a Dream’ speech only if they know that African Americans at the time faced segregation and legal discrimination, that the speech was part of a larger movement for civil rights, and that King was a leader of that movement. They also must understand his references to the Declaration of Independence and the Emancipation Proclamation, or else the speech will be unintelligible.”18 Students will gain an even richer understanding if they study the way King’s speech has been used in contemporary times, especially by groups with often-opposing political agendas.

Introduce students to four LGBT people of African descent with whom they may not be familiar, yet who were indispensable to the ideas, strategies and activities that made the civil rights movement a successful political and social revolution.

Explore the work of women in the civil rights movement through the writings of Eloise Greenfield in this lesson series from the Yale-New Haven Teachers Institute.

Music and the Movement