Last week’s racist spirit banner incidents at both an Alabama and a Tennessee high school reinforced for us the necessity of Native American Heritage Month. Many in the Native community have pointed to these incidents as teachable moments, and the principals of the schools have since apologized. But the fact that the now-infamous “trail of tears” banners happened at all seems indicative of a collective cultural blasé about Native American identity that also supports the endurance of Indian mascots and the popularity of mass-produced Native-inspired fashion (most often sported by young concert-goers and club hoppers). The refusal of those who defend the Redskins moniker or wear fake Indian headdresses to question these choices reveals privilege so deeply ingrained that the need to look cool or resist change trumps all other considerations—including a historically oppressed culture’s need to be respected.

This week we were interested to learn about a grass-roots celebration that uses clothing to honor—rather than appropriate—Native culture. November 15 marked the third annual Rock Your Mocs event, a day when “Native Americans, Alaskan Natives, Aboriginal/First Nations and Indigenous Peoples throughout the world … wear moccasins to school, to work or wherever [the] day takes [them].” The event was founded by New Mexico student Jessica “Jaylyn” Atsye, a member of the Laguna Pueblo tribe.

According to Rock Your Mocs press material, now-21-year-old Jaylyn was inspired to set aside a day for Native solidarity when she looked at her own feet one day and realized that her footwear connected her to countless Native and indigenous people. She thought how powerful it would be to know that people all over the world were all making the same small statement about their identity by wearing moccasins on the same day—people from many different tribal backgrounds (often discernable by the decoration of their moccasins) and cultures who all shared pride in their Native heritage. November 15 seemed like a logical date to try out her vision as it fell in the middle of Native American Heritage Month.

Rock Your Mocs has gained traction each year. This November 15 the story was picked up by the AP and enjoyed exposure in The Washington Post and on Yahoo news and The Huffington Post, among other outlets. The event’s Facebook and Twitter pages have exploded with colorful photographs of moc-rockin’ children and adults all over the US and Canada and places as far-flung as New Zealand, Afghanistan and Guam. Dancers in New York City produced a video of themselves rocking their mocs while dancing in the street. 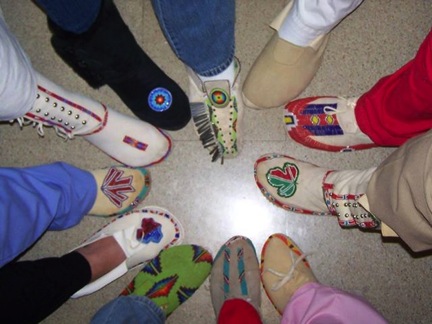 Photo published with permission of the Anadarko Indian Health Center.

The initiative is not without its critics. Rock Your Mocs is advertised as a day of celebration everyone can participate in, and some have argued that merely donning footwear trivializes the complexity of Native identities and does not go far enough to inform the broader population about the histories and cultures of indigenous populations. But supporters remain firmly committed to the day’s capacity for positive awareness-building. Jaylyn has posted information on where to purchase Native-made moccasins and continues to use her publicity platform to encourage education, solidarity and forward-facing dialogue focused on improving respect and understanding.

While an initiative like this cannot—and should not—take the place of curriculum that teaches in depth about Native culture and history, it may help non-Native observers and participants make connections between cultural symbols and the people for whom they truly hold meaning. It may help expose the problems inherent in appropriating traditions and perpetuating stereotypes associated with Native identity. And it may help inspire other young activists. Rock Your Mocs is a youth-led, social-media-driven phenomenon that has gained tremendous momentum in just a few years. Even if your school doesn’t participate, stories of young people like Jaylyn who succeed in initiating change are important for students to hear.

However you celebrate Native American Heritage Month, consider talking with your students about Rock Your Mocs. The debate, the intent, the collective action model, the social media component and the original need for it are valuable contemplation points for all—Native students who need to see their identities reflected in the school setting, and non-Native students striving to understand the identities and experiences of indigenous people—past and present.

van der Valk is a writer and associate editor for Teaching Tolerance.