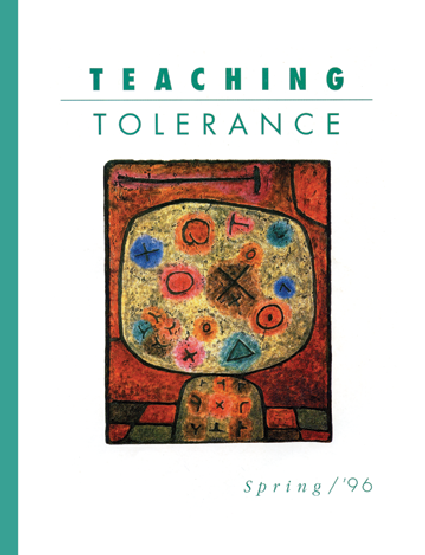 Crisp, precise, working off her notes with the poise of a real courtroom attorney, North Allegheny High School senior Jamela Martin steadily questions her client. The answers she gets are disturbing.

"Elyse Roberts," the plaintiff, claims she was sexually harassed by her boss, "Kevin Murphy," a Washington, D.C., attorney. She cites his record of suggestive comments and unwelcome physical contact and describes a tense, hostile work environment. She is suing for medical expenses and damages of $150,000 for the intentional infliction of emotional distress.

The plaintiff's case is a strong one. Martin, who has done a thorough job as the plaintiff's attorney, continues to draw out the details of her client's complaint. Roberts recalls the Sports U.S.A. swimsuit pictures with her name scribbled on them tacked to the office walls.

"When you told Mr. Murphy you found the pictures demeaning," Martin asks, "how did he respond?"

"Objection, your honor! She's calling for hearsay." Jeff Dougherty, his shirttails untucked, is the defendant's lead counsel. A big junior with a breezy, confident manner, he has already rattled the opposing attorneys several times with his artful objections.

"Your honor," says the plaintiff's co-counsel, a young woman in a light blue suit who stands to address the court. "As defendant, Mr. Murphy is party to the case, so the question should be allowed."

All eyes turn to the "judge," George Sagan. Draped in a black graduation gown and perched behind the courtroom stage set that dominates his classroom, Sagan looks like he may have missed his vocation. Trim, soft-spoken, only slightly balding, he's positively judicial.

"That's good," he says. "The objection is overruled." And then, for the defense counsel's benefit, "Do you understand why?"

It's another day in Sagan's second-period social studies class, where mock trials are part of the curriculum and law is the vehicle for sustained lessons in citizenship and participation. Sagan, a 20-year teaching veteran, says that law-related education -- or LRE, as it's known -- has revolutionized the way he does his job.

"The class is involved now, with a kind of energy and moral seriousness they wouldn't have if I were just up here lecturing them."

The students have prepared for the case of Elyse Roberts v. The District of Columbia by reading a sheaf of mock trial materials put together by the National Institute for Citizen Education and the Law. The NICEL program gives students the chance to investigate social issues through simplified but realistic role-plays based on actual courtroom cases.

In this case, Sagan says, the lessons deal with a variety of issues in addition to sexual harassment. "An active citizen needs to be able to see things from multiple perspectives, to appreciate the moral complexities of a problem, to listen to others, to speak and write convincingly. And those are skills that can be taught."

Indeed, proponents of law-related education, who number some 20,000 teachers, say that an understanding of legal principles is essential if we hope to maintain a tolerant, pluralistic society.

"Knowledge of the law undergirds our freedom," asserts Nancy Murray, director of Project Hip-Hop, a Brookline, Mass., organization that seeks to familiarize students with the history of the civil rights movement and the laws that were changed as a result. "Every couple of years, a new poll comes out showing that most Americans not only can't recognize the Bill of Rights but are deeply suspicious of it. And yet our right to worship as we please, to petition the government, to speak out even if our opinions are deeply unpopular -- all these rights are embedded in that founding document."

LRE also helps develop those attitudes that make for a healthy democracy. Jack Hoar, a consultant with the Center for Civic Education/Law in a Free Society, says that the interactive, role-playing activities that characterize law-related education aren't just for fun.

"They're exercises in de-centering the self, in moving away from the certainty that your opinions are true because they are yours. Someone who is modest enough to recognize that even her most deeply held principles may be wrong, who seeks to understand the minds of others and considers their opinions without bias, is the very definition of a tolerant person."

Law-related education can also give students the sense of having a stake in the system. By drawing on the fundamental intuitions students have about authority, justice, privacy and fairness, and by showing how these ideas are embedded in the law, LRE can deepen students' allegiance to it. A system that may have seemed alien and incomprehensible suddenly resonates with values the children actually hold.

At its most ambitious, LRE seeks to involve students in society's ongoing efforts to define and live up to its highest standards of justice. Murray, who takes a group of students on a tour of civil rights sites every summer, says, "I teach the history of those who have agitated and sacrificed to make the Constitution meaningful because I want young people to get excited about fighting for a more just world."

Rudy Bravo, a junior at East Boston High, became involved in law-related education when he met Nancy Murray at a meeting of the Massachusetts Bar Association. He was there to attend a conference on racial violence in schools; she encouraged him to become active in the state student council, which trains students to work to change laws that affect them.

In his role as regional student coordinator, Rudy was galvanized by a student training seminar on the victimization of gays and lesbians in high schools. "At first, I couldn't believe all the stories that people were telling me. It opened my eyes to the whole issue."

He became deeply involved in gay rights issues, helping to sponsor a resolution presented to the Massachusetts legislature amending the state's equal protection laws to include sexual orientation. At first, the motion was rejected.

"Then we had a big rally at the statehouse," he recalls. "There were 500 students there. We got all dressed up, wrote letters to our representatives. We even got some coverage on "60 Minutes." The bill passed, and now Gov. [William] Weld has started a gay, lesbian and heterosexual collaborative of high school students to advise him on issues affecting them."

Bravo says he didn't worry about possible negative reactions from classmates. "I've been ridiculed before for being Hispanic. I'm not going to let something that trivial stop me from doing this important work."

An active citizen needs to be able to see things from multiple perspectives, to appreciate the moral complexities of a problem, to listen to others, to speak and write convincingly. And those are skills that can be taught.

Back in Sagan's class, the momentum has shifted dramatically. Under the defense's withering cross-examination, the plaintiff's job performance and office demeanor are being ruthlessly dissected.

Ms. Roberts admits that her job performance was poor, but she maintains that her performance fell off only because of the hostile office environment she encountered while working with the defendant, Kevin Murphy. Still, many of her answers seem tentative and hollow, more like excuses than explanations.

The defense plows on. "Now, Ms. Roberts, when was the last time you went on a date?"

"Objection, your honor. The question has no relevance."

"Your honor, the defense means to show that Mr. Murphy's behavior towards the plaintiff was no more than the usual office bantering, and that Ms. Roberts interpreted the remarks unreasonably because she wasn't mature enough."

For the first time today, Sagan looks unsure of himself. Procedural questions can be hard even for experienced judges to decide, let alone schoolteachers with only a touch of legal training themselves, and this one is a tricky call. He allows it but urges the defense to get to the point quickly.

Later, Sagan admits the program makes more demands on him than a traditional class would.

"You have to balance entertainment, teaching and law," he says. "I try to keep things flowing so that the kids in the back of the class don't get bored. But I also want to make sure that everyone understands the mechanics of what they're doing."

Whatever doubts the defense has planted deepen when the defendant himself is called to the stand. A cheerful, upbeat young man wearing a clip-on polka-dot bow tie, he freely admits to having made the occasional flirtatious remark but says that it was part of the office routine and that no one took offense. They were working under a lot of pressure, he says. Jokes were a way of letting off steam.

The plaintiff's attorneys are unable to crack Murphy's confidence, and the case against him seems, suddenly, ambiguous, even weak. Colleagues, male and female, rally to his defense, saying it would be completely out of character for him to have harassed Ms. Roberts or anyone else. A key piece of the plaintiff's case -- Murphy's remark that "I've always wanted to show you my briefs," uttered when Roberts accidentally saw him changing into his gym clothes -- may have been an innocuous way of defusing an awkward situation.

When the two sides finish their closing statements, it's a coin toss as to which way the jury will decide. There are six jurors, three of each sex, and five of them are volunteers from a neighboring study hall. The sixth is an English and social studies teacher. None has any prior knowledge of the case. Sagan gives them careful instructions before sending them into the hallway to deliberate, reminding them that, as a civil case, this trial is to be decided on the preponderance of the evidence.

The initial vote of the jury is 4 to 2, with the young men and the English/social studies teacher voting to dismiss the case. Although the two young women vote with the plaintiff, only one of them boldly defends her position. "What did he do after she complained about the pictures?" she asks. "He wrote her name on them."

"Yeah, but he took them down the next day," says one of the men.

"The next week," she counters.

"I mean, the guy may be insensitive, but he's not a criminal."

"That's not what we're here to decide."

"As good as. If we decide against him, it'll ruin his career."

"No one else has ever complained about Murphy. So we're supposed to believe that she somehow brought out the ogre in him? That doesn't seem likely."

Sagan sticks his head out the door before the end of the period. This time the vote is 5 to 1, enough for a dismissal. He tells the jurors to keep their verdict secret until the following day, however, since there won't be enough time for them to discuss their decision with the class.

Afterwards, Sagan is philosophical. "Everyone's clear about what to do when someone gropes you or says something obscene. It's the bad pun, or the innocent but misinterpreted invitation to an office event, that's got everyone confused."

And perhaps that confusion is part of the price we pay for a tolerant society, Sagan concludes. "We have to learn to live with the knowledge that we might be wrong -- even about those things that matter most deeply to us."