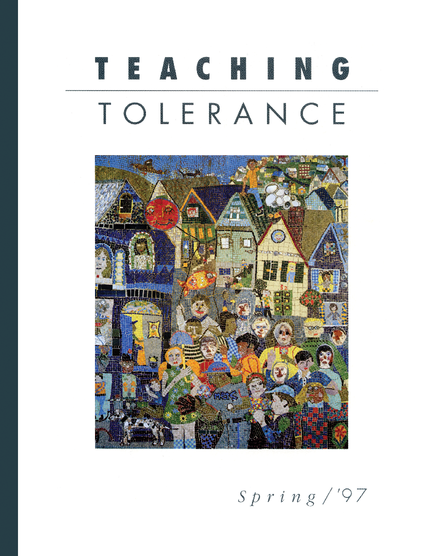 Writer, activist and educator Elizabeth "Betita" Martínez has been working for social justice for more than 30 years. She grew up in Washington, D.C., and, as the daughter of Mexican American teachers, was exposed at an early age to issues of cultural identity.

Martínez's experiences during the Civil Rights Movement as a full-time staff member of the Student Nonviolent Coordinating Committee (SNCC) heightened her social consciousness and laid the groundwork for her role in the Chicano Movement of the late 1960s and '70s. In 1982 she ran for governor of California on the Peace and Freedom Party ticket -- the first Chicana on the ballot for that office.

Concerned about the distortion of Mexican American history, in 1976 Martínez edited the bilingual book 450 Years of Chicano History in Pictures and in 1995 produced the video-and-text kit ¡Viva La Causa! 500 Years of Chicano History. Running through her work of the last three decades is the conviction that, in the fight against racism, "we must celebrate all of humanity's great stories of struggle."

Martínez, who teaches Ethnic Studies and Women's Studies in the California state university system, currently works with Latino and multinational youth groups. She has published five books on social movements and written on Latino issues for Z Magazine, Rethinking Schools and other publications.

She spoke with Teaching Tolerance Research Associate Gabrielle Lyon in May 1996.

How did you become interested in civil rights issues?

It goes way back. My father, a Mexican who grew up during the Mexican Revolution [1910-1920], told me a lot of stories about the heroic leader Emiliano Zapata. I also remember him talking about the U.S. Marines shelling Veracruz, Mexico, during the Revolution and landing there and killing a lot of civilians. It was really a horror that you don't learn about very much in U.S. schools. So I grew up with a strong consciousness of U.S. intervention in Latin American struggles for justice.

I had my own personal experiences with prejudice. I was the only child of color in primary school, junior high and high school. I went through all those years feeling like a freak in one all-white school after the other. The family next door wouldn't let their daughter play with me because I was Mexican. I got on a bus once in D.C. with my father, who was very dark, and they told us to go to the back of the bus, where black people had to sit in those years.

All this created in me a feeling of empathy and solidarity with people of color and formed the roots of my commitment to fighting for social justice and against racism.

Teachers are often confused by ethnic identifications -- "Latino/Latina," "Hispanic" and others. What advice would you give them?

Most people call themselves by the name of their family's nationality. They will say "I am Mexican" or "I am Chilean." Other terms are not just a matter of identification; they are also political.

The group term that has been common in this country since the Nixon administration is "Hispanic," which is used as a blanket to cover more than 20 different nationalities. I firmly believe that the advertising industry had a lot to do with "Hispanic" becoming so established because of its desire to create a market that would encompass a single population.

I don't use "Hispanic" because it is Eurocentric and denies the fact that the people being labeled are not just of Spanish origin. Nor do they all speak Spanish. "Hispanic" denies our indigenous or Indian roots. It also denies our African roots, from the thousands of slaves that were brought to Latin America. "Hispanics" are a unique people made up of at least three different populations.

For many of us the term "Latino/Latina" is better than "Hispanic." It has a connection with Latin America, not with Spain. But "Latino" is by no means ideal because it has a European connotation, also. The term comes from "Latin," which was, of course, a European language.

Then comes the term we often use ourselves, "la Raza."

What does "la Raza" mean?

"La Raza" can be translated literally as "race" or "breed," but as used it means "the People," very much the way Native Americans call themselves, in different languages, "the People." "La Raza" is a popular all-embracing term among many of us. But it's the one least used by the media and the dominant society.

How does "Chicano/Chicana" fit into the terminology?

Today a lot of terminology-shifting goes on. For example, many university departments are changing their names from "Chicano Studies" to "Chicano/Latino Studies" because of the enormous increase in population from countries other than Mexico -- especially Central American countries. These are issues with serious meaning; they're not just picky labels.

Latinos have the lowest high school graduation rate of any population group. How do you account for this?

The first thing that happens when a child from a Spanish-speaking family goes to school is that their name gets changed. "Roberto" gets Anglicized as "Bobby," "Estevan" gets turned into "Steve," and every name you can think of gets massacred. In my own case, "Betita" was turned into "Potato" by my fellow pupils. What it does to your mind to become "Potato" in school is not to be described. All too often, your identity gets attacked from day one by teachers or other students.

Then come other attacks on the Spanish language. There are today teachers and administrators who frown on or disallow the speaking of Spanish on school grounds by Latinos, even though the law now prohibits that discrimination.

The problem continues with the lack of bilingual counselors and teachers, and with the lack of Latino student recruitment and retention programs. It's surprising any Latino child makes it past 5th grade. All these factors help build that 50 percent drop-out rate. That's why it should be called "push out" rather than "drop out."

How does the portrayal of Latinos in the curriculum play a role?

"Invisibilization" in the curriculum is one of the major problems. Mexicans and other Latinos are simply not considered seriously in U.S. history textbooks. If there are any Mexicans recognized, it's usually as upper-class ranchers or missionaries or so-called "explorers" back in the 16th or 17th centuries.

There's little recognition of the fact that almost one-third of the present-day United States used to be part of Mexico and, before that, Native American lands. There's also little recognition of the vast wealth created by Mexican labor. The Southwest was essentially built by Mexican, along with Chinese and Filipino, workers -- yet Mexicans are seen strictly as immigrants and not as "real" Americans.

There's nothing about the fact that thousands of Mexicans living here were lynched in the century following the 1848 U.S. takeover -- or "annexation." Neither the contributions nor the suffering are in most U.S. history textbooks.

The curriculum also supports a criminalization process -- and this is very important in terms of youth. The guerrilleros ["warriors"] who resisted the 1848 takeover are portrayed in textbooks solely as bandidos ["bandits"]. Yes, they probably did steal from rich Anglos, but Mexican people see that as a Robin Hood thing. The criminalization began then and continues to this day with the stereotyping of Mexican youth as gangbangers. There's a similar situation for African-American youth, of course.

Both projects were related to "celebrations" that I felt had to be re-evaluated. The pictorial history 450 Years was produced in 1976 as an answer to the U.S. Bicentennial, which was a celebration of the American Revolution that ignored the genocide of the native peoples and glorified westward expansion. Then in 1992 came the quincentennial of the so-called "discovery" of America by Columbus. That inspired the current edition of the book.

But there still weren't any up-to-date audiovisual materials with a broad historical overview for teachers who might want to teach a different kind of history. I saw the incredibly strong, positive effect of showing Eyes on the Prize to classes I taught, and I used it a great deal. I thought there should be an Eyes on the Prize about the Chicano struggle, so ¡Viva La Causa! was born in 1995 as an attempt to give an audiovisual form to Chicano history for young people.

Latino student activism is on the rise. What issues are important to these students?

Well, guess what? The same ones as 30 years ago!

In 1968, at least 10,000 Los Angeles high school students walked out of school in one week in what they called "Blow Outs." They demanded, among other things, that Chicano history and culture be respected and taught in schools, that more Mexican-American teachers be hired, and that racist policies such as discouraging Chicano students from going to college or training as professionals be ended.

In 1993-94, thousands of northern California high school students walked out with very similar demands. The gains of the '60s are under attack, and there's a need to reaffirm what we thought had been won.

How is this student movement different from earlier ones?

One of the things that strikes me most is that women today are participating in ways that were never open to women in the '60s. Like doing security at an event, being monitors on a march, being major speakers at rallies, being decision-makers. In other words, doing a lot more than just making the coffee, taking minutes at meetings and typing men's speeches. Some groups have a 50/50 rule -- meaning male/female participation as speakers and as leaders.

There is also a commitment to a new kind of leadership. It's impressive when you go to a meeting where nobody can speak twice until everyone in the room has spoken once. The goal is to be democratic and avoid a "star" system of leadership.

I'm very impressed by the organized way in which Latino high school and college students have moved beyond demonstrations to all sorts of other tactics. They still march, go on hunger strikes and have other public protests, but, at the same time, they are working to establish Chicano Studies in high schools by attending school board meetings and meeting with faculty. They are also registering voters as part of a whole campaign to defend affirmative action and immigrant rights. These student activists are going to have an effect, and I hope they have teacher support.

You've called for fresh thinking about racism, namely, that we need to recognize its multiple forms. Why is this important?

Thinking about racism in terms of just black and white is a further "invisibilization." We have to recognize the commonality of experience of racism among people of color. Sometimes racism is based on skin color or other physical features; it can have added components of culture, language and legal status -- as in the case of people of Mexican descent.

What can teachers do to foster alliances?

The second thing is to start seeing through the whole "divide and conquer" strategy, including the lies and scapegoating that go on. Our struggle isn't just for tolerance. It isn't just about saying that everybody should be respected or that all cultures have value. It's recognizing that domination exists, and we're combating that domination when we try to teach differently.

Respect is a goal, but you can't get there without recognizing what's in the way and understanding why it's so difficult. We have to go beyond tolerance. The answer to "divide and conquer" is "unite and overcome."