The associate director of Teaching Tolerance urges us to stick with the tough conversations.
Glenda Valentine
Issue 13, Spring 1998
Teach This in a Learning Plan
X
Add to an Existing Learning Plan
START A NEW LEARNING PLAN
Bookmark Don't Walk Away
Print 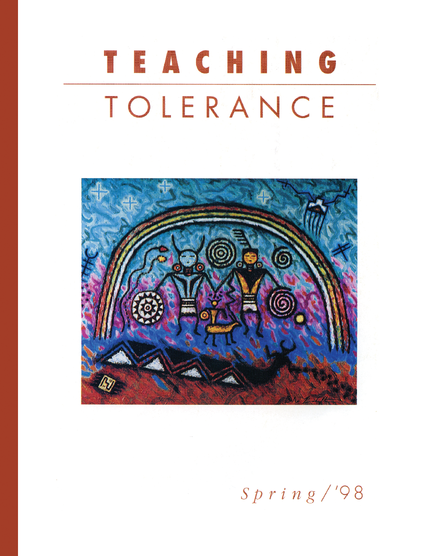 It had been a particularly intense session for the 30 teachers at the 1997 Teaching Tolerance Institute. Tempers flared, emotions spilled over, and one tired, frustrated, disappointed teacher left the room muttering, "This is too hard. I just don't want to talk anymore."

"Conversation" has become the buzzword for understanding differences. Yet, like their counterparts on the President's Advisory Council on Race, the Institute participants found that productive conversation on sensitive subjects, whether race or class or sexual orientation, is more easily talked about than accomplished.

For the diverse group of teachers who attended the Institute last July, this reality hit especially hard by calling into question the sense of community that had grown among them. Their binding commonalities as educators committed to equity issues had led to easy conversation -- at first.

The test came when deep differences in values, beliefs and experiences surfaced. As unpopular opinions were voiced and insensitive statements confronted, these creative, open-minded individuals found their willingness to communicate seriously threatened.

One subject in particular -- the appropriateness of discussing sexual orientation in schools -- tore at the group's emerging sense of community. People started removing themselves from the discussion. Some simply chose not to speak, and one person walked out of the room.

Fortunately, the two people who were most vocal in their opposition to one another decided to keep talking. Not arguing but talking. One happened to be White and the other Black. They did not resolve their differences or change each other's minds, but they did listen to each other long enough and hard enough to find areas of agreement. More important, they learned to respect each other's right to a different opinion.

Later, the two teachers explained why they had persisted:

"When people stopped talking, something happened to our community. Voices were lost. The opportunity to listen to and learn from each other was gone."

"As educators, how can we walk away? When a difficult discussion comes up in the classroom, will we walk away from it? What kind of example is that for students?"

The next morning, one of the teachers read aloud an observation by educator Suzanne Goldsmith that illuminated the group's experience: "Communities are not built of friends, or of groups of people with similar styles and tastes, or even of people who like and understand each other. They are built of people who feel they are a part of something that is bigger than themselves."

The tension from the previous evening ebbed as the Institute participants realized that, for them, as for all educators, the "something bigger" is the responsibility of teaching future generations. That responsibility binds them as a community, regardless of their differences. But that responsibility also obligates them to keep talking.