A Native American activist calls for an end to "Indian" team mascots.
Barbara Munson
Issue 15, Spring 1999
Teach This in a Learning Plan
X
Add to an Existing Learning Plan
START A NEW LEARNING PLAN
Bookmark Not for Sport
Print 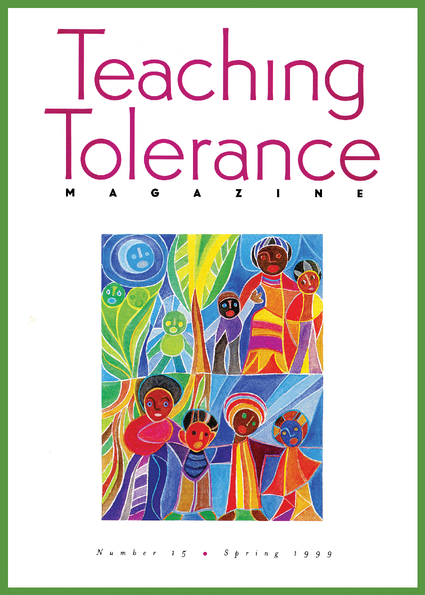 In April 1991 when my daughter Christine wrote a letter to her principal about her high school's "Indian" mascot and logo, I did not realize that the issue would lead our family to activism on the state and national level. Whether the problem surfaces in New York state; Los Angeles County; Tacoma, Wash.; or Medford, Wis., I have found that it is framed by the same questions and themes.

As long as "Indian" team names, mascots and logos remain a part of school athletic programs, both Native and non-Native children are being taught to tolerate and perpetuate stereotyping and racism. I would like to point out some common misunderstandings on this issue and suggest constructive ways to address them.

"We have always been proud of our 'Indians.'"

Most communities are proud of their high school athletic teams, yet school traditions involving Native American imagery typically reflect little pride in or knowledge of Native cultures. These traditions have taken the trappings of Native cultures onto the athletic field where young people have played at being "Indian." Over time, and with practice, generations of children in these schools have come to believe that their "Indian" identity is more than pretending.

"We are honoring Indians; you should feel honored."

Native people are saying that they don't feel honored by this symbolism. We experience it as no less than a mockery of our cultures. We see objects sacred to us -- such as the drum, eagle feathers, face painting and traditional dress -- being used not in sacred ceremony, or in any cultural setting, but in another culture's game.

Among the many ways Indian people express honor are: by giving an eagle feather, which also carries great responsibility; by singing an honor song at a powwow or other ceremony; by showing deference toward elders, asking them to share knowledge and experience with us or to lead us in prayer; by avoiding actions that would stifle the healthy development of our children.

While Indian nations have the right to depict themselves any way they choose, many tribal schools are examining their own uses of Indian logos and making changes. Native American educators, parents and students are realizing that, while they may treat a depiction of an Indian person with great respect, such respect is not necessarily going to be accorded to their logo in the mainstream society.

"Why is an attractive depiction of an Indian warrior just as offensive as an ugly caricature?"

Both depictions uphold stereotypes. Both firmly place Indian people in the past, separate from our contemporary cultural experience. It is difficult, at best, to be heard in the present when someone is always suggesting that your real culture only exists in museums. The logos keep us marginalized and are a barrier to our contributing here and now.

Depictions of mighty warriors of the past emphasize a tragic part of our history; focusing on wartime survival, they ignore the strength and beauty of our cultures during times of peace. Many Indian cultures view life as a spiritual journey filled with lessons to be learned from every experience and from every living being. Many cultures put high value on peace, right action and sharing.

"We never intended the logo to cause harm."

That no harm was intended when the logos were adopted may be true. It is also true that we Indian people are saying that the logos are harmful to our cultures, and especially to our children, in the present. When someone says you are hurting them by your action, then the harm becomes intentional if you persist.

"Aren't you proud of your warriors?"

Yes, we are proud of the warriors who fought to protect our cultures from forced removal and systematic genocide and to preserve our lands from the greed of others. We are proud, and we don't want them demeaned by being "honored" in a sports activity on a playing field.

Indian men are not limited to the role of warrior; in many of our cultures a good man is learned, gentle, patient, wise and deeply spiritual. In present time as in the past, our men are also sons and brothers, husbands, uncles, fathers and grandfathers. Contemporary Indian men work in a broad spectrum of occupations, wear contemporary clothes, and live and love just as men from other cultural backgrounds do.

The depictions of Indian "braves," "warriors" and "chiefs" also ignore the roles of women and children. Many Indian Nations are both matrilineal and child-centered. Indian cultures identify women with the Creator, because of their ability to bear children, and with the Earth, which is Mother to us all. In most Indian cultures the highest value is given to children -- they are closest to the Creator and they embody the future.

"This logo issue is just about political correctness."

Using the term "political correctness" to describe the attempts of concerned Native American parents, educators and leaders to remove stereotypes from the public schools trivializes a survival issue. Systematic genocide over four centuries has decimated more than 95 percent of the indigenous population of the Americas. Today, the average life expectancy of Native American males is 45 years. The teen suicide rate among Native people is several times higher than the national average. Stereotypes, ignorance, silent inaction and even naive innocence damage and destroy individual lives and whole cultures. Racism kills.

"What if we drop derogatory comments and clip art and adopt pieces of 'real' Indian culture, like powwows and sacred songs?"

Though well-intended, these solutions are culturally naive and would exchange one pseudo-culture for another. Powwows are religious as well as social gatherings that give Native American people the opportunity to express our various cultures and strengthen our sense of Native community. To parody such ceremonial gatherings for the purpose of cheering on the team at homecoming would compound the current offensiveness. Similarly, bringing Native religions onto the secular playing field through songs of tribute to the "Great Spirit" or Mother Earth would only heighten the mockery of Native religions that we now see in the use of drums and feathers.

"We are helping you preserve your culture."

The responsibility for the continuance of our cultures falls to Native people. We accomplish this by surviving, living and thriving; and, in so doing, we pass on to our children our stories, traditions, religions, values, arts and languages. We sometimes do this important work with people from other cultural backgrounds, but they do not and cannot continue our cultures for us. Our ancestors did this work for us, and we continue to carry the culture for the generations to come. Our cultures are living cultures -- they are passed on, not "preserved."

"Why don't community members understand the need to change; isn't it a simple matter of respect?"

On one level, yes. But in some communities, people have bought into local myths and folklore presented as accurate historical facts. Sometimes these myths are created or preserved by local industry. Also, over the years, athletic and school traditions grow up around the logos. These athletic traditions can be hard to change when much of a community's ceremonial and ritual life, as well as its pride, becomes tied to high school athletic activities.

Finally, many people find it difficult to grasp a different cultural perspective. Not being from an Indian culture, they find it hard to understand that things that are not offensive to themselves might be offensive or even harmful to someone who is from a Native culture. Respecting a culture different from the one you were raised in requires some effort -- interaction, listening, observing and a willingness to learn.

We appreciate the courage, support and, sometimes, the sacrifice of all who stand with us by speaking out against the continued use of "Indian" logos. When you advocate for the removal of these logos, you are strengthening the spirit of tolerance and justice in your community; you are modeling for all our children thoughtfulness, courage and respect for self and others.