To All My Relations 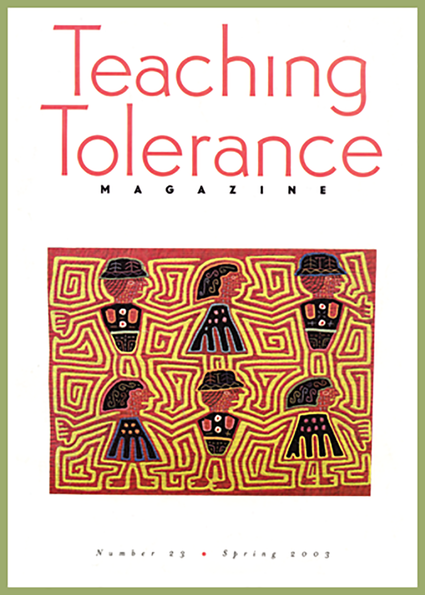 Nathia Hampton grew up in Orange Mound, an African American neighborhood of Memphis. She was 12 when her mother died from injuries she sustained in a fall.

Instead of placing his five children under state protective services, Nathia's father made the decision (against prevailing wisdom) to care for them on his own. Nathia learned how to make her own clothes and meet other daily challenges of poverty.

She became close friends with a White classmate and experienced the particular sting of racism that sometimes targets such relationships. When her sister had a baby, Nathia quit school to help out. Eventually, she found herself the single parent of two daughters.

Hampton, now an educational assistant and computer lab manager at Four Winds School in Minneapolis, is not accustomed to recounting her personal history to roomfuls of people. But her new honorary status as one of the school's "community elders", at the venerable age of 37, requires her to do just that on this May morning, sitting before an eager class of student partners who will set her life story to music.

Long has taken the program into hundreds of public schools across the country, using collaborative songwriting to accomplish these goals.

Long, who has spent more than three decades as an organizer for labor unions, peace campaigns and other community causes, describes himself as a troubadour and a bridge-builder.

"A troubadour uses music to connect people with each other's stories," he explains, "and to give a voice to those who often aren't heard." (Over the past year, Long has collaborated with Teaching Tolerance to produce a free sing-along CD for the elementary grades, called I Will Be Your Friend.)

In the first step of the EWCS workshop process, a committee of teachers, administrators and community volunteers select a group of local "elders" - adults of any age who have given something back to the community that nurtured them.

Elders can be teachers or staff members within the school, grandparents, neighbors or civic leaders. The only requirement is that the honorees as a group reflect the cultural, gender and class diversity of the local community.

Four Winds School was founded in 1990 as a public magnet school emphasizing American Indian cultural heritage. At first, the facility drew its students largely from the surrounding Phillips neighborhood of South Minneapolis, which has long been a center of Lakota and Ojibwe settlement in the city.

As neighborhood demographics have changed in recent years, the population at Four Winds has reflected a growing diversity. There is currently a mix of American Indian, African American, Ethiopian, Somali and Latino students.

At Four Winds, all students receive instruction in Lakota and Ojibwe language and culture. In addition, all courses utilize what principal Gary Lussier calls an "American Indian perspective," which promotes living in harmony with the human community and the natural world.

In order to foster stronger relationships between students and staff, the elder selection committee at Four Winds decided to honor role models from within the school - four in all, counting Nathia Hampton.

Amanuel Tessema, a bilingual program aide who works specifically with Ethiopian students, is a member of the Oromo minority from Ethiopia, which makes up a significant proportion of recent immigrants to the Phillips neighborhood.

To All My Relations Lyrics

Oh Mitakuye Oyasin ("We are all related")
To all my relations
To all of my friends.

Willard Malebear, a member of the Lakota tribe from the Standing Rock reservation in South Dakota, teaches Lakota language and culture. The fourth elder is Windy Downwind, of the Anishinabe tribe from the Red Lake reservation in Minnesota, who serves as youth coordinator for high-risk students.

Each elder in the EWCS program partners with one classroom for a series of creative sessions, following a model that Long has tested in schools in 12 states. The first meeting provides 40 uninterrupted minutes for the elder to tell his or her life story.

Students and teachers then transcribe the narrative and distribute it to the class members, who will study the text, prepare questions and interview the elder at the next meeting.

"How did you feel after your mother died?" Brittany, age 11, asks Nathia Hampton during the interview session at Four Winds.

Another student says, "I liked the part where you said that 'life is a choice.'"

"Because it's true," a classmate adds. About 80 percent of the students in the class live in single-parent households, so Hampton's experience resonates strongly with her young audience.

"It's pretty hard for one parent to take care of the kids alone," 11-year-old Alan says. "My dad has to work all the time. I know what it was like for you, without your mom."

In the following three sessions, Long works with the students to write a song using the elder's original words. The first session consists of an open dialogue exploring events and ideas from the elder's autobiographical presentation. Students question the elders and record their responses on butcher paper taped to the walls.

Next, the students identify prominent themes from the elder's personal story and the follow-up exchange. Then they break into smaller groups, each charged with pulling together the notes and comments relating to a particular theme. In the refining phase, the young lyricists shape and polish this raw thematic content into a sequence of verses.

By writing and singing the songs in the first-person voices of the elders, Long says, the children come to identify with that person's character and perspective. "The message is 'Don't judge somebody until you've really experienced their story.'"

This late spring morning, Larry Long is leading the Four Winds students in a rehearsal of the song they have written for Hampton, which they call "Life Is a Choice."

"It was very therapeutic to remember everything," Hampton says, "It was healing."

The project will culminate in a community-wide celebration at the school, with parents, teachers, elders and their families in attendance. The students perform their songs for the elders, who are seated on a stage or other place of honor.

"It’s so powerful when you have the elders sitting there and the children singing their songs to them," Long observes. "Within one residency, you’ve effectively reenacted the creation of a folksong, because a folksong is something that moves through the generations."

Long also mentors teachers, so that they can continue to conduct the program after he has left the school. "It works best when we are working together as a team," Long says.

On a practical level, the EWCS collaborative format helps students sharpen their skills of listening, questioning, writing and reading, which apply across the curriculum.

Life Is a Choice

When I was 12
My mother died
She slipped on ice
Hospitalized
I prayed to God
Don't let my Mom go
But when she did
We divided the chores
In my Daddy's home.


Life is a choice
Make the right choice
Choose to be you
Respect yourself
Respect each other.

The deeper goal, Long says, is to forge meaningful connections among the neighborhoods, racial communities and other social groups represented in each school.

Eleven-year-old Regal, a student at Four Winds, concurs. "Once you start to know about a person, you start to think a little different," he says. "Maybe you’ve had some of the same experiences."

"It was better than a book," says Lisa, age 12, who worked with Amanuel Tessema. "We heard his whole life story."

Felicia, 11, who also worked with Tessema, was impressed with his ability to speak so openly. Tessema talked about the experience of growing up as a member of an ethnic minority in Ethiopia.

"The Oromo people want their own homeland," he told the students, "and they want to have a say in the affairs of the government. They want a democratic government based on majority rule. Most of us are eager to see this happen."

In another session, Willard Malebear told the class about growing up on a reservation in South Dakota. He described where his name came from, and the importance of his cultural heritage, as well as the fear he felt at being the only American Indian in his school.

He talked about the teachings from his grandfather, who introduced him to the sweat lodge and other spiritual disciplines of the Lakota. The song that the students wrote for him, "To All My Relations," captures his words.

Long believes that elders' stories provide young people with positive role models. "If you ask kids to write a song," he observes, "they’ll often take themes from popular culture — cartoons, things like that. If you bring an elder in, they’ll hear the elder’s story, and this becomes what they want to write about. It gives children choices as to who they want to look up to."

Bonnie Jean Flom is a former principal of Nerstrand Elementary in Nerstrand, a rural town in southern Minnesota, where Long introduced the EWCS model five years ago.

Now, school staff and community members organize the workshop and celebration themselves each year. Flom has seen Elder’s Wisdom, Children’s Song take the already congenial relationship between school and community to a deeper level.

"We had always invited elders to school before Larry came," she says, "but we always invited them to attend an event. Now they take part. I believe that, as a result of this work, they feel highly valued. The children have developed a real reverence for elders in the community — and not only those who are formally honored. It extends to other community members as well."

The EWCS emphasis on "place value" allows schools as different as Nerstrand and Four Winds to carry out the program in a way that’s locally meaningful.

"There’s not much racial diversity in southern Minnesota," Flom notes. "But we have gender difference, of course, and economic diversity. So we make sure that, along with balancing men and women, we include someone from a farm, someone from town."

She says that the entire community anticipates the spring event, to see whose story will be told. "The children start asking about it in February, when we begin selecting elders. It has really been woven into the fabric of the school."

Bridget Hall, a 5th grade teacher at Four Winds, has noticed a lingering aftereffect of the program among her students. "I’ve seen a new maturity in dealing with other people’s experiences," she says. "They have more empathy. When Ms. Hampton told her story, they really listened. Now I hear the kids using lines from the song with each other in the classroom, saying, ‘Life is a choice,’ and ‘Don’t be a thug.’ I think that’s because they have ownership over it. They feel attached to the song."

The process has also had a profound impact on elder Nathia Hampton.

"They’ve come up and told me how sad they feel for my mother’s death," she says. "It is very moving, and I feel very close to them. They could really relate to every aspect of my life, and I learned a lot from them. They are my elders as well."

According to Larry Long, this reciprocal effect is the essence of the Elder’s Wisdom, Children’s Song philosophy.

"The intergenerational component in a child’s upbringing is one of the strongest sources of values and respect," he says. "So doesn’t it make sense that schools should nurture that?"