Josh is annoyed with his grumpy neighbor, until a family member helps him find compassion.
Sue Carloni
Issue 49, Spring 2015
Add to a Learning Plan
X
Add to an Existing Learning Plan
START A NEW LEARNING PLAN
All articles from this issue
Print

“Jimmy, have you seen my dog?” Mr. Olson asked.

“You don’t have a dog, Mr. Olson. And my name is Josh, not Jimmy.” Josh rolled his eyes as he hopped on his bike and pedaled toward his friend Brandon’s house. Mr. Olson was Josh’s neighbor. Josh often saw him standing on the sidewalk, gazing down the street.

“Let me know if you find Bailey!” Mr. Olson called after him.

When Josh arrived, Brandon was sitting on his front porch, his swimsuit and towel on his lap.

“What took you so long?”

“Mr. Olson stopped me—again. He keeps asking if I’ve seen his dog Bailey that died last year. And he keeps calling me Jimmy.”

“I’ll race you there!” Josh reached the entrance to Grant Park first, then waited for Brandon to catch up. They parked their bikes in the bike rack outside the chain-link fence that surrounded the pool. After swimming and splashing in the hot afternoon sun, Josh said, “Let’s go back to my house.” 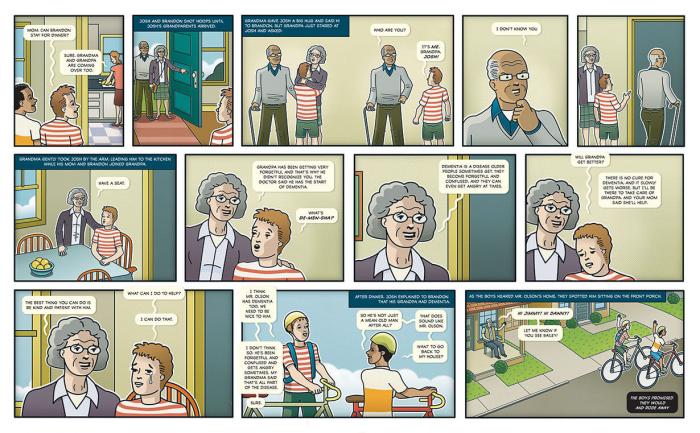 As the boys rode their bikes past Mr. Olson’s house, they saw him wandering around his yard. “Bailey, Bailey!” he shouted. “Jimmy, have you seen Bailey?”

“Your dog is dead, you crazy old man!” Brandon said.

The boys just laughed as they walked their bikes up to Josh’s house. “What’s the deal with Mr. Olson?” Brandon asked Josh.

When they got inside, Josh asked his mom, “Can Brandon stay for dinner?”

“Sure,” Mom said. “Grandma and Grandpa are coming over too.”

Josh and Brandon shot hoops until Josh’s grandparents arrived. Grandma gave Josh a big hug and said hi to Brandon. But Grandpa just stared at Josh and asked, “Who are you?”

Grandpa scratched his balding head. “I don’t know you,” he said gruffly.

“How can you not know me? I’m your grandson!” Josh glanced at his mom, as panic set in.

Grandpa grumbled, turned and walked toward the living room.

Grandma gently took Josh by the arm, leading him to the kitchen while his mom and Brandon joined Grandpa. “Have a seat,” she said.

Josh sat down at the kitchen table and slumped in the chair.

“Grandpa has been getting very forgetful and that’s why he didn’t recognize you. The doctor said he has the start of dementia.”

“Dementia is a disease older people sometimes get. They become forgetful and confused, and they can even get angry at times.”

Josh suddenly thought about Mr. Olson. Maybe he had dementia too. Josh’s eyes stung as he choked back tears. He crossed his arms on the table and rested his head on them.

Grandma put her arm around Josh’s shoulder. When he looked up, he asked, “Will Grandpa get better?”

Grandma shook her head. “There is no cure for dementia, and it slowly gets worse. But I’ll be there to take care of Grandpa. And your mom said she’ll help.”

Josh wiped a tear trickling down his cheek with the back of his hand. “What can I do to help?”

“The best thing you can do is be kind and patient with him.”

After dinner, Josh explained to Brandon that his grandpa had dementia. “I think Mr. Olson has dementia too. We need to be nice to him.”

“So he’s not just a mean old man after all?” Brandon asked.

“I don’t think so. He’s been forgetful and confused and gets angry sometimes. My grandma said that’s all part of the disease.”

“That does sound like Mr. Olson,” Brandon said. “Want to go back to my house?”

As the boys neared Mr. Olson’s home, they spotted him sitting on the front porch. “Hi Jimmy! Hi Danny!” he called out.

Josh and Brandon smiled and waved.

Mr. Olson smiled and waved back. “Let me know if you see Bailey!”

The boys promised they would and rode away.

Right There (In the text)

Think and Search (In the text)

Describe how Josh’s feelings about Mr. Olson change over the course of the story.

Author and Me (In my head)

What other titles might you give this story. Why?

Describe an experience you have had with someone of a different generation. Did your age difference impact your attitude and behavior? How?