Buddy Up With Arthur

What a wonderful kind of day—to incorporate Arthur into your curriculum.
Maureen Costello
Issue 55, Spring 2017
Bookmarked 4 times
Illustration by Marc Brown Studios
Add to a Learning Plan
X
Add to an Existing Learning Plan
START A NEW LEARNING PLAN
All articles from this issue
Print

Of all the stars produced at WGBH—Boston’s public broadcaster—Arthur the aardvark is unquestionably one of the most recognizable. Since making the leap from books to television in 1996, Arthur has experienced the daily trials of childhood alongside his elementary-age fans on the eponymous PBS Kids children’s show, currently produced by WGBH and Oasis Animation, Inc. Teaching Tolerance spoke with WGBH Senior Executive Producer Carol Greenwald about the secret to Arthur’s longevity and how the new Arthur Interactive Media (AIM) Buddy Project can help support anti-bias education.

Could you begin by telling us Arthur’s origin story?

We began working on Arthur in 1993. I don’t know if you remember who Peggy Charren was, but she was a proponent of quality children’s television and literacy and a founder of Action for Children’s Television. One study she did showed that kids were more likely to read books if they saw them on TV. Our children’s programming team was inspired by that, and went on a hunt to find a great book series that could sustain what PBS was looking for, which was a daily television series.

The way we ended up finding Arthur was that someone gave my then-3-year-old son a copy of Marc Brown’s book Arthur’s Teeth. Unlike the other kids’ books I had been reading, I realized I didn’t want to hide this one under the couch because it could stand up to repeated readings. Our team recognized by looking at what was there in the Arthur books—and what we dreamed of making—that we could do a lot of modeling of positive social emotional relationships between kids.

How has Arthur stayed relevant for over 20 years?

A lot of things kids experience today haven’t changed from 20 years ago. Getting a pair of glasses, dealing with a bully or going to a new school—those are things that kids have always and will always experience. Those experiences are at the heart of many of our Arthur stories. At the same time, because we’ve been able to stay in continuous production, we’ve been able to respond to new trends and keep abreast of them—like episodes that address internet bullying as well as the new trends in social media. Even though our kids are too young for social media, we do recognize that it’s in their world, and we’ve been able to respond to it. 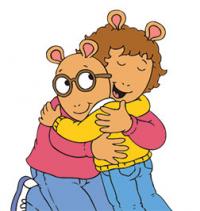 How is Arthur’s message relevant to anti-bias educators?

Since we started the show, it has always been a goal that none of our characters would be perfect. They would all stumble up against things that would mess them up; they would make mistakes; they would do things that real kids do as they’re learning, experimenting and figuring out who they are. As a consequence, what we’ve been able to do is to build stories around those experiences, both for the kid who makes the mistake and for the kid who’s experiencing the impact of that mistake.

I think this actually does fit beautifully with what anti-bias educators are doing. Here are these characters in this world who are bumping up against all the things every kid bumps up against—and the trick is to intervene before things get solidified, before these mistakes become more serious. We give them the opportunity to really think about and discuss these things in what I hope is an authentic context.

Why do you think children relate so well to the characters on the show?

In part, it has to do with our characters never being perfect. In creating these characters, we really tried to include a range of personalities and life experiences. We’ve tried hard not to make any character identified as a specific ethnic group or skin tone because we want kids to identify with the characters across the board. I have two interesting stories about that. One is about five years after we started the show, we did a research study that looked at what the appeal was of all the characters. Across social, economic, racial groups, Buster was the character both boys and girls said, “He’s the most like me.” We were very interested in that because it shows just how appealing a kind of a goofy character who occasionally makes mistakes is to kids. One of the things we did with Buster was put him in a family structure where his mom is a single parent, and that’s clearly very appealing.

Recently, a young African-American woman on my staff said to me, “Oh, you didn’t know Arthur was black?” I said, “You know, I did not. I’m glad you feel that way.” My hope is that any kid can look at any of these characters and say, “Oh yeah, that character is me.” I’m delighted that that’s what people are experiencing.

Tell me a little bit about the Arthur Interactive Media (AIM) Buddy Project.

As we began developing the AIM program, we took a look at a vocabulary-building show we had produced earlier called Martha Speaks. This was a reading buddies project. Research results showed us the program made an impact on kids’ vocabulary skills, which was great, but we also found there were subsidiary effects that had to do with school-climate improvement: the development of positive relationships between the older and younger buddies and an increase in self-esteem for the older buddies. It was like, “Whoa, this is some gold here.” We thought it would be great to try to combine the rich resource we have in Arthur stories with this buddy-pairing mechanism for reaching kids. 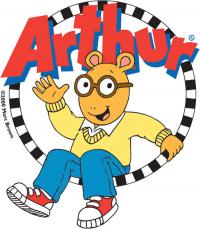 We partnered with a research team from the Institute for Applied Research in Youth Development at Tufts University, under the direction of Dr. Richard Lerner, to create a program that focuses on five key topics—empathy, forgiveness, generosity, learning from others and honesty—that we thought would help build kids’ pro-social skills and, in effect, create a positive school climate and a reduction in behaviors like bullying. We created media and activities around these topics that were pulled from this rich Arthur resource.

Three years ago, we piloted the first interactive comic and unit of curriculum focused on empathy. Since then, we’ve created four additional media tools and curriculum units. The full program was part of a year-long research study during the 2015–2016 school year. The research data is now being analyzed, and reports will be ready for the program dissemination in January 2017.

Participation in a character-focused buddy project does a couple of things. One is it establishes a relationship between older and younger kids, and it gives those kids a context to have conversations about these issues that are maybe a little complicated to understand, maybe a little abstract, but then when they play the games and interact with the characters, it feels more concrete to them.

What do you think adults who care about diversity, equity and social justice can learn from the ways in which children respond to Arthur?

Children have not yet built up those big walls that adults have. There’s an ability to be open to new ideas, and to be able to take on this kind of learning that isn’t so deeply embedded or so rock hard that you can’t crack it, which is exactly why I feel so privileged to have worked on Arthur this long. I also think it’s so crucial that we are targeting kids in this age group. They are all growing up in an incredibly diverse world, they’re going to be experiencing this on an everyday basis, and it’s just crucial that we find ways for kids to understand and appreciate their differences, but also recognize where their similarities are and where they can work together.