Toolkit for “I Am Asian American”

This toolkit accompanies the article “I Am Asian American,” and provides professional-development resources to help teachers reflect on their own assumptions and knowledge gaps about Asian Americans and to include a variety of Asian-American voices in their curricula.
Issue 44, Summer 2013
Teach This in a Learning Plan
X
Add to an Existing Learning Plan
START A NEW LEARNING PLAN
Bookmark Toolkit for “I Am Asian American”
Print 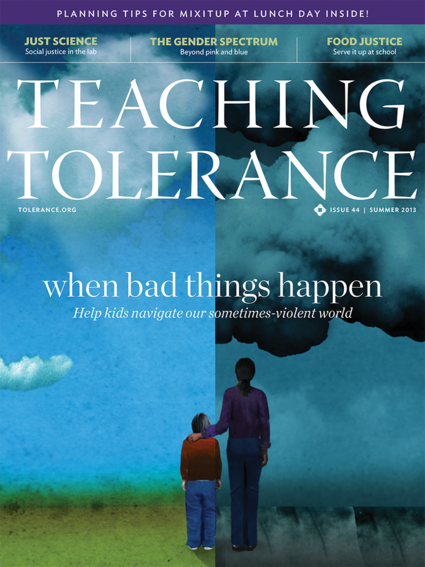 The umbrella term Asian-American often hides the great diversity of historical contexts, cultures and current-day issues faced by different peoples within its scope. Educators can help challenge the stereotype that all Asian peoples have the same language, culture or history by reflecting on their own assumptions and knowledge gaps and by including a variety of Asian-American voices throughout their curricula.

Asian Pacific American Heritage Teaching Resources includes links to a variety of curriculum guides, online resources and lesson plans to help educators teach about the histories and cultures of Asian-American peoples. The website includes interdisciplinary lesson plans on the history and experiences of Korean Americans, Japanese Americans, Vietnamese Americans and other Asian peoples. It also links to online exhibits on particular moments in Asian-American history, such as the Japanese internment camps, Chinese immigration to California and the creation of the state of Hawaii. Many of the lessons focus on the experiences of young people and include primary sources written by young people.

Asian Nation: Asian American History, Demographics, and Issues is curated by a Vietnamese-American professor of sociology at the University of Massachusetts Amherst. The purpose of the site is to provide demographic and historical information about Asian-American communities as well as articles and blog posts about current issues that affect Asian-American communities, such as the portrayal of Asian Americans in the media, international adoption, assimilation and interracial dating. The site also links to primary sources.

This subpage on socioeconomic statistics and demographics could be used to start a research project in which students investigate the differences among Asian-American ethnic groups today. You could ask students to research the causes of differing levels of educational attainment or economic conditions between different groups of Asian Americans.