When Bad Things Happen, Be a Helper

When it seems that tragedies are happening in rapid succession, we evoke a quote from educator and television host Fred Rogers of Mister Rogers’ Neighborhood. As a boy, his mother told him that when scary thing happen to “look for the helpers.”
Maureen Costello
Add to a Learning Plan
X
Add to an Existing Learning Plan
START A NEW LEARNING PLAN
Print 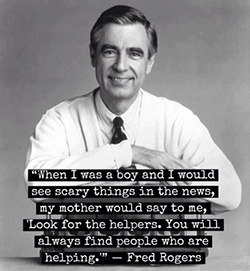 For each issue of our Teaching Tolerance magazine, I write a "note from the director." In the last two notes I've grappled with the role educators play in the face of national tragedy, first the Sikh temple shooting in Wisconsin, then the school massacre in Newtown, Conn. Teaching Tolerance has also posted blogs offering advice on how to keep students safe, how to address their anxieties, how to sensitively deal with the unwelcome teachable moment.

When the news of the bombings at the end of the Boston Marathon began to break last Friday, I found myself at a loss. Do we keep saying the same thing? Repost what we've posted before? Bother trying to find a new way to help the grown ups give children a sense of security in an insecure world?

It turns out, though, that there was another way, and it came in the form of an old Mr. Rogers episode. It soon multiplied on Facebook and other online sites, with shares cascading throughout the weekend. Mr. Rogers simply said, when bad things happen, “look for the helpers.”

It's not just another way to talk about tragedy, either. I think we've grown as a nation as well. We're learning—sadly—to shake off the shock a little sooner, and set about doing something positive. We did it after Hurricane Sandy, and after Sandy Hook. In Boston, the news media looked at, and celebrated, those who ran toward the victims to help.

It's the same behavior we've encouraged in children who witness bullying: Get involved, speak out, stand up. Don't be a bystander, be an ally.

Costello is director of Teaching Tolerance.