Why Our Students Need ‘Equity Literacy’

Several stacks of fake dollar bills enclosed in a Plexiglas case sit at the center of an exhibit entitled “RACE: Are We So Different?” at the National Museum of Natural History in Washington, D.C. One stack towers over the others. This teetering pile of bills represents the average net worth of “white” people’s assets in relation to those of other racialized groups based upon data collected by the U.S. Census Bureau from 1997 to 2000. While the “Asian” stack is almost as high, the “black” stack can hardly be called a stack at all; the “Latino” stack is almost as low.
Katy Swalwell
Teach This in a Learning Plan
X
Add to an Existing Learning Plan
START A NEW LEARNING PLAN
Bookmark Why Our Students Need ‘Equity Literacy’
Print

Several stacks of fake dollar bills enclosed in a Plexiglas case sit at the center of an exhibit entitled “RACE: Are We So Different?” at the National Museum of Natural History in Washington, D.C. One stack towers over the others. This teetering pile of bills represents the average net worth of “white” people’s assets in relation to those of other racialized groups based upon data collected by the U.S. Census Bureau from 1997 to 2000. While the “Asian” stack is almost as high, the “black” stack can hardly be called a stack at all; the “Latino” stack is almost as low. 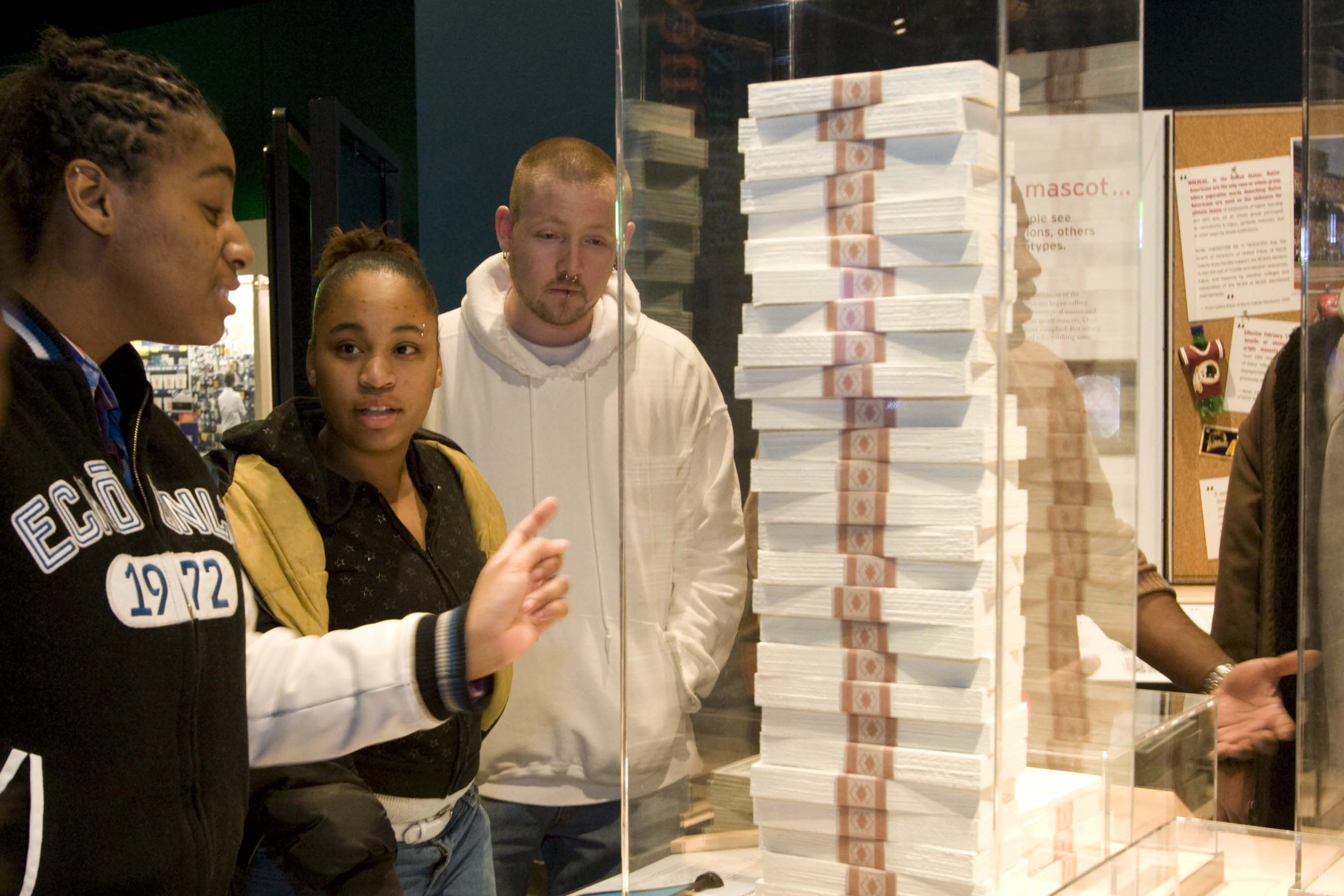 Students discuss the “stacks of money” illustrating the distribution of wealth in America. This is part of the “Race: Are We So Different?” exhibit at the National Museum of Natural History in Washington, D.C.
Photo credit: Courtesy of American Anthropological Association and Science Museum of Minnesota

An informational placard presents the chilling current statistics behind the display: “Today the net worth of the average African-American family is about one-tenth that of the average white family. Much of that disparity is due to differing rates of home ownership between these two groups and to the generally lower values of homes blacks own than homes owned by whites. The gap is perpetuated as wealth—or the lack of it—is passed down from parent to child.”

I was visiting this exhibit recently with colleagues to scout it out as a field trip site for our university students. We overheard a troubling exchange as a group of middle school black students crowded around the case next to us.

One student read the placard aloud. Then came the indignant exclamations: “That’s not fair!” “Wait, that represents us?” “This is crazy!”

They looked to one of their chaperons for answers. “This says we have almost nothing compared to everyone else!” Her reply: “Don’t worry – that was the olden days. It’s not like that now.”

The placard clearly explained that these stacks were based on recent data. The students’ questions and comments were legitimate, their outrage completely reasonable. Why had their teacher responded this way?

Weeks later, I could not shake my dismay at what we had overheard. I wish I'd asked the teacher about her response.

I came across a report published this fall: “Building A Better America—One Wealth Quintile At A Time” from the journal Perspectives on Psychological Science. Harvard Business School professors Michael I. Norton and Dan Ariely designed a quiz they administered to several thousand Americans.

People were shown three pie charts on wealth distribution. They were asked which one represented the current situation in the United States. The first pie chart was split evenly five ways; the second was less equal with the top quintile controlling 36 percent while the lower quintile controlled 11 percent; and the third, which showed the top quintile with 84 percent of the wealth while the bottom two quintiles controlled 0.3 percent combined. After making their guesses, participants were also asked which society they would most like to live in.

The report found that people dramatically underestimated wealth inequality in the United States, rarely choosing the correct pie chart—the most unequal. (Sweden represented the second pie chart; the first was hypothetical). At the same time, respondents—regardless or political affiliation—overwhelmingly expressed a desire to live in societies with even more equally distributed wealth. This suggests Americans may be more open to policies that support more equitable wealth distribution than our pundits and politicians proclaim.

This report and our encounter with students at the exhibit made me rethink how we, as educators, must frame our curriculum and pedagogy from a social justice perspective. Teachers must proactively position their work as responding to a disturbing gap in Americans’ knowledge base. We need to draw attention to how many people are un- and misinformed when it comes to social and economic inequality in our society. We also need to remind our neighbors how important it is that students learn basic facts, like those represented in the museum’s exhibit.

As the museum exhibit showed, black families have a tenth of the assets held by white families. The important question for our society is why such inequality exists. And more importantly, what do we intend to do about it? No doubt our students will have a range of beliefs and ideas about how those problems ought to be solved—such is the messy blessing of a diverse democracy. But there should be no mistaking that the problems exist. A strong curriculum for a healthy society depends on students having command of these “facts of strife” in order to meaningfully participate in these debates.

I suggest that we call this knowledge base “equity literacy” and add it as the sixth element to Connie North’s definition of social justice education. We need K-12 students who are knowledgeable about the inequity that exists in our midst as much as we need them to know that two plus two equals four, that George Washington was the first president of the United States or that the earth is round. We need students to have a grasp of the historical trajectories of marginalized and privileged groups and to understand how those groups have been—and continue to be—framed. And we need them to be familiar with the many ways these facts are interpreted. Thoughtful debates about policy at the local and national level depend upon the people’s capacity to do so.

Swalwell is an assistant professor in the college of education at George Mason University. She teaches social studies methods courses for the elementary education program.