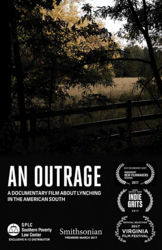 An Outrage, a film by Hannah Ayers and Lance Warren, is available for streaming only, exclusively for registered Learning for Justice members.

For decades following the Civil War, racial terror reigned over the United States and, particularly, the American South, claiming thousands of lives and uprooting countless others. Lynching—at once extralegal and a systemic form of social control—left in its wake a pain that still lingers. That pain was first endured by brutalized black bodies, and then by the black communities it devastated and displaced.

Those communities now face a different kind of violence: silence and erasure. Victims of lynching were forgotten in a graveyard overgrown with weeds planted by their tormentors.

An Outrage, a film by Hannah Ayers and Lance Warren, joins the movement to right this wrong—not only to promote remembrance but also to illustrate how this recent history of injustice engenders further injustice today.

Through the voices of scholars and activists in communities across the South, as well as through the descendants of the victims themselves, this film serves to educate viewers and call them to action. An Outrage takes viewers to the very communities where heinous acts of violence took place, offering a painful look back at lives lost to lynching and a critical look forward.

After the Civil War, black people were eager to embrace their new rights as citizens; the Reconstruction era was brimming with hope. But, from the beginning, local governments and white citizens in the South sought to undermine black people’s freedoms with laws, social codes and discriminatory economic systems designed to separate, subjugate and disempower them. When the federal government grew tired of fighting white pushback against Reconstruction, white supremacy festered in two forms: one, the racial terror and intimidation we call lynching; and, two, Jim Crow laws.

Lynching occurred beyond the law, but the Jim Crow South provided the justification for racial terrorism, a term the Equal Justice Initiative uses to refer to the widespread violence used to keep black people “in their place.” The system of laws not only suppressed black people’s right to vote and live freely but also created a caste system and social code in which black people were expected to behave a certain way, exhibiting reverence toward white people in all settings. If white people perceived that this code had been broken they commonly formed a lynch mob—a group of racial terrorists posing as vigilantes protecting their way of life and implicitly demanding black obedience and submissiveness.

This use of racial terror as social control served several purposes. For white people fearful of losing jobs to a newly freed black labor force, lynching eased their economic anxiety through intimidation, pushing black people away from certain jobs and communities. For those fearful of a “mixed” society, racial terror punished black people who even allegedly sought to come in contact with white people, sexually or socially. And for white Southerners disenfranchised by Reconstruction and nostalgic for the antebellum era, racial terror replaced slavery as a valuation of black lives. Extreme violence became a public spectacle used to illustrate a continued disregard for black bodies.

The racial terror of lynching encompassed far more than the noose often used to symbolically conjure its memory today. While public hangings did take place, so too did prolonged acts of torture. Victims of lynching were often brutally beaten, even mutilated, castrated, dismembered, burned alive or any combination of these acts.

These killings were deliberate, premeditated and often public. While some lynchings took place under cover of darkness, others played out in town squares. Often, a crowd of hundreds or thousands bore witness to the violence. Frequently, concessions were sold, witnesses posed for photographs with the corpse and members of the crowd left with detached body parts of the dead as souvenirs.

Lynching apologists painted the victims as perpetrators of heinous crimes receiving their due “justice.” This characterization of the victims contradicts documented evidence.

The majority of victims of racial terror faced allegations of rape or murder, but few actually stood trial. They were, instead, presumed guilty and often broken out of their jail cells to be lynched. Those who did see trial faced a biased judicial system in which all-white juries decided their fates (black people could not serve on juries); many were dragged from the courtroom to their deaths. An allegation was a conviction, no matter the evidence or lack thereof.

Commonly, racial terror punished individuals who broke—or were perceived to have broken—arbitrary social codes. Interracial sex or any “out-of-bounds” interracial interaction between a black man and white woman could lead to lynching. So could perceived social faux pas, such as bumping against a white person in public, speaking disrespectfully or disobeying orders.

In the early 20th century especially, racial terror was also used as a tool to punish those resisting injustice. Community leaders and groups advocating for workers’ rights or civil rights often faced fatal consequences for their activism, as did black people who rose to positions usually filled by white people.

Altogether, thousands died in this system of racial terror. In the most comprehensive report on the subject, the Equal Justice Initiative estimates more than 4,000 black people were killed from 1877 to 1950—in just 12 states.

Yet, despite epidemic death tolls and bone-chilling methods of public execution, authorities were indifferent to lynching. State and local governments in the South often feigned an inability to stop these public executions from happening, even when they were advertised in advance. Groups like the KKK, which organized countless events of racial terror during its resurgence in the early 20th century, met little resistance. Their members had the resources and were allowed the time to build public pyres or platforms, while government officials issued half-hearted condemnations and law enforcement remained complicit partners in a barbaric people’s court. Sometimes, the only difference between an officer of the law and a member of the KKK was the uniform they chose to wear.

Members of the black community did work to resist and reveal the scope of racial terror in the South. Activists boycotted businesses tied to perpetrators of lynchings, harbored targeted black people and organized into groups such as the NAACP. The black press, in particular, worked hard to provide a voice for the victims and call for justice. Journalists like Ida B. Wells and John Mitchell Jr. worked fervently to expose the horrors of lynching.

Their work to continues today. As An Outrage illustrates, the historical proximity between rampant racial terror in the South and today is razor thin. Present-day demographic patterns and racial tensions in the United States are in part, reflections of the reach of racial terror.

The Great Migration—during which millions of black Americans fled the South—transformed urban populations across the Northeast, Midwest and West. And families, only a few generations removed from experiencing lynching firsthand, still feel the economic and psychological impact of having family members killed or their lives upended as a result of this extralegal system of control.

The horrors and history of lynching, therefore, do not exist in a distant or detached past. An Outrage highlights community change makers giving voice to victims and families white supremacists tried to silence through acts of racial terror.

The film encourages viewers to look back at a history students may not see in their textbooks; it also encourages taking steps forward toward a better future.

“By facing the awfulness done by Americans who came before us, identifying the behaviors and biases within us all that perpetuate the pain of those acts, and discussing how to remember and rise above that past, we can do better,” says filmmaker Lance Warren.

Michelle Alexander, The New Jim Crow: Mass Incarceration in the Age of Colorblindness (The New Press, 2010).