Committing to Nonviolence: A Lesson from Viva La Causa

This lesson is part of the Viva la Causa teaching kit.

Viva La Causa introduces students to nonviolent resistance, a philosophy and social change strategy that rejects the use of physical violence. Nonviolence serves as an alternative to just accepting things as they are (passive acceptance) and to armed struggle. As illustrated by the farmworker movement, nonviolent tactics include strikes, marches and boycotts.

The film also refers to two nonviolent leaders and movements that inspired the farmworkers. Mahatma Gandhi, widely seen as the "father of nonviolence," introduced the general concept of nonviolent action and consciously applied it on a societal level. A lifelong Hindu, Gandhi organized a successful nonviolent struggle against British colonial rule of India, which ended in 1947.

In the 1950s, a young preacher in Montgomery, Ala., called upon Gandhi's model to counteract another injustice: racial apartheid in the U.S. The Rev. Dr. Martin Luther King, Jr., who later received the Nobel Peace Prize for his leadership in the Civil Rights Movement, recalled: "Gandhi was probably the first person in history to lift the love ethic of Jesus above mere interaction between individuals to a powerful and effective social force on a large scale."

In this interactive lesson, students will identify shared techniques of nonviolent resistance in the movements to bring independence to India, end American racial segregation, and secure greater economic justice for farmworkers. As a closing activity, students will write a personal essay applying nonviolent techniques to an issue affecting their community.

Ask students to share what they know about Mahatma Gandhi, Martin Luther King, Jr. and nonviolent resistance. Write student observations on the board.

Explain that the class will delve more deeply into nonviolent resistance by looking at the movement for India's independence (led by Gandhi), the Civil Rights Movement (led by King) and the farmworker movement (led by Chavez.)

Divide the class into three groups. Provide each group with a copy of the handouts, A Trilogy of Nonviolent Movements handout along with an index card for each student. Assign Gandhi, King or Chavez to each group.

Ask each group to review their leaders entries on A Trilogy of Nonviolent Movements and list:

Each student should transfer one item from the groups discussion onto an index card. Students should write their names on their cards. Collect the index cards for use during the following class period.

Before students enter the class, move desks out of the way to create an open space in the center of the room. Use tape or string to create a large Venn Diagram on the floor. The circles should be big enough to allow students to stand in them. Teachers also can consider using chalk to create a Venn Diagram on outdoor P.E. courts. 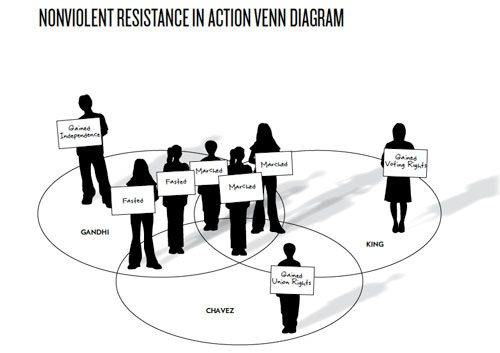 As students enter the classroom, ask them to stand with their group and return each student's index card.

Ask the Gandhi team to step forward and provide a brief summary of the Indian independence movement. Each student should then read from his or her card and step inside the "Gandhi circle" on the floor.

The King and Chavez groups should follow. As students discover aspects they share in common across groups, they should move into the shared spaces between the circles on the floor.

When every one has had a turn, allow students a moment to look around. Then invite them to move their chairs back to their normal places and have a seat.

Conclude the activity with a whole-class discussion on the following themes:

Distribute the following writing prompt to students as a homework assignment, asking them to apply nonviolent techniques to an issue affecting their lives or community.

Use students' essays to identify issues of common concern. Create opportunities for students to connect with others and act on their ideas.