Discussion Questions for 'I Want the Wide American Earth'

The Asian-Pacific-American story has roots that reach across borders and span oceans—but the tale is quintessentially American. How we teach and learn about American history and culture must include building knowledge about the struggles, the sacrifices and the achievements of Asian-Pacific Americans. The questions below are designed to help build that knowledge in your classroom.

These questions accompany the Smithsonian’s poster series I Want the Wide American Earth. They can be used in class discussions or as prompts for writing. 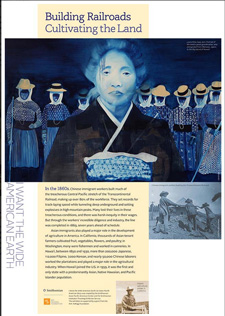 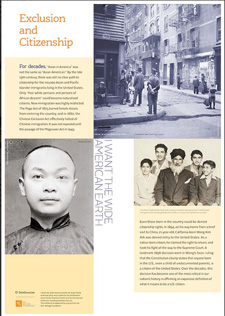 Smithsonian Education: Asian Pacific American Heritage Teaching Resources includes links to a variety of curriculum guides, online resources and lesson plans to help educators teach about the histories and cultures of Asian-Pacific Americans. The website includes interdisciplinary lesson plans on the history and experiences of Korean Americans, Japanese Americans, Vietnamese Americans and other people of Asian descent. It also links to online exhibits on particular moments in Asian-Pacific-American history, such as the internment of Japanese Americans, Chinese immigration to California and the creation of the state of Hawaii. Many of the lessons focus on the experiences of young people and include primary sources written by young people.

A Century of Challenge and Change: The Filipino American Story is an interactive, multimedia curriculum that follows the lives and experiences of Marissa and Jordan, two young Filipino Americans. Students travel with the two young characters through Filipino history and culture; highlighted words link to word definitions, photographs and more detailed information about names and terms. The units also include a chance for students to “talk back to history” and share what they learned with others.

Asian Nation: Asian American History, Demographics and Issues is curated by a Vietnamese-American professor of sociology at the University of Massachusetts Amherst. The purpose of the site is to provide demographic and historical information about Asian-Pacific-American communities as well as articles and blog posts about current issues that affect these communities, such as the portrayal of Asian-Pacific Americans in the media, international adoption, assimilation and interracial dating. The site also links to primary sources.

This subpage on socioeconomic statistics and demographics could be used to start a research project in which students investigate the differences among Asian-Pacific-American ethnic groups today. You could ask students to research the causes of differing levels of educational attainment or economic conditions between different groups of Asian-Pacific Americans.