Economic Injustice Affects Us All: A Lesson from Viva La Causa

This lesson is part of the Viva la Causa teaching kit.

Economic injustice was at the heart of la causa. Growers made their fortunes while farmworkers struggled to get by. Such disparity is common not just in the fields, but throughout the U.S. economy.

In 1998, hundreds of people from around the country went to Washington, D.C., to lobby Congress about the wage gap - the disparity in wages between workers and corporate executives. While there, to raise public awareness about the issue, they descended on the Washington Monument - which stands 555 feet tall. The Monument, they told onlookers, represented CEO pay. Organizers then placed a much, much smaller replica of the Washington Monument next to the real thing. The replica represented worker pay. In 2003, it would have stood just 16 inches tall, a ratio of 419 to one; the typical CEO's annual income was equivalent to the incomes of 419 people who worked for him or her.

In this activity, students will come to see that economic disparities affect us all and that we should all be concerned with economic justice.

Introduce the activity objectives to students and then divide the class into five diverse small groups.

Give each group one of the tables or charts from the handout. Ask each small group to review its chart, create a simple statement about the chart's meaning and then explain it to the whole class.

Share the "Washington Monument" story with students. (See the Framework, above.) And ask each small group to come up with one or more ways the data on their charts could be presented creatively (see the example at the bottom of this page).

Students can use any kind of art technique for which there are supplies draw, paint, collage, sculpture. Encourage students to be creative. Allow time for students to conduct necessary research and create their replicas. Display students' art projects in the classroom, school library or elsewhere, and hold a forum where students explain the meanings of their artwork to others.

Encourage students to ask clarifying questions and provide feedback to each other.

Reconnecting to the Film

Bring the activity back to la causa by having students reflect on how the inequities of today mirror those that the farmworkers were working against. Prompts might include:

The Washington Monument story included in this activity is drawn from Economic Apartheid in America: A Primer on Economic Inequality in the U.S., Chuck Collins and Felice Yeskel with United for a Fair Economy and Class Action (The New Press, 2005).

Our group chose to do an artistic representation of the increase in CEO pay and worker pay. Our chart tells us that CEO wages increased by 45 percent during 1997-2007, while worker pay increased only 7 percent.

A monument to labor leader César Chávez was erected in 2008 at San Jose State University, to honor Chávez for his nonviolent action for workers' rights.

The Statue of Liberty was built in the late-1800s and is one of America's most visible architectural icons. Ironically, she is known for proclaiming, "Give me your tired, your poor, your huddled masses yearning to breathe free..."

The César Chávez monument is an arch 22 feet high. The Statue of Liberty is in New York harbor and stands about 155 feet high. That makes the Statue of Liberty about 7 times higher than the Chávez monument, close to the difference between CEO and worker wage increases. We also chose these two pieces of public art for their cultural heritage and how they mirror the visibility of privilege and poverty. 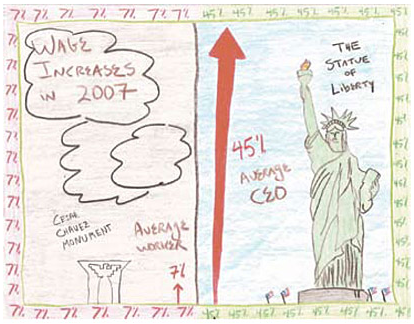