Using Editorial Cartoons to Teach Social Justice is a series of 14 lessons. Each lesson focuses on a contemporary social justice issue and begins with a basic strategy for interpreting editorial cartoons. In addition, each lesson helps build students’ background knowledge about a particular social justice issue. The objectives in every lesson combine these disciplines to challenge students and promote critical thinking skills. Although lessons may be used in sequence, each can also be used independently.This lesson focuses on an editorial cartoon that uses irony to comment on the April 2010 immigration law passed by Arizona legislature. The law aims to identify immigrants who are in the country illegally, but questions have been raised about how police decide who should be stopped and asked for papers. One criticism is that the law encourages racial profiling. In this lesson, students analyze an editorial cartoon that comments on that law using irony.
Grade Level
6-8 9-12
Bookmark Editorial Cartoon: Racial Profiling
Print
SHARE
Topic
Race & Ethnicity Immigration Bullying & Bias Rights & Activism
Subject
Reading & Language Arts
Social Studies
Arts
ELL / ESL
Social Justice Domain
Justice
Objectives

At the end of the lesson, students will be able to:

A projector or interactive whiteboard showing the cartoon featured in this lesson, or copies of the cartoon to be distributed to all students.

1. Tell the class that you will be exploring how editorial cartoonists comment on current events. Explain to students you will be looking at an example related to a law that the state of Arizona’s legislature enacted in 2010.  That law empowered police to stop people who looked as if they might be in the United States illegally, and to require those people to produce papers proving their legal status. When the law was passed, critics contended that it encouraged racial profiling because of its lack of clarity in determining whom police were permitted to stop.

2. Project on a screen or pass out copies of the editorial cartoon featured in this lesson.

3. Divide the class into discussion groups of four students. Using a Numbered Heads approach, assign students in each group a number between one through four. Tell all students that they may be called upon to report on the discussion in their group.

4. Have everyone study the editorial cartoon. Urge students to focus first on the cartoon’s images, then pose these questions for groups to discuss: 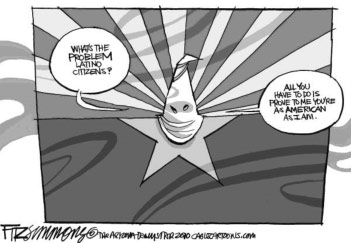 Cartoon by David Fitzsimmons. Reprinted with Permission. Teachers may purchase individual cartoons for other lesson plans at PoliticalCartoons.com

5. Now tell students to pay close attention to the words. Ask them:

6. After they have explored the images and words, invite each group to analyze the cartoonist’s strategy. Tell students that this cartoon uses irony to make its point. Tell students that irony refers to a situation in which something happens that is the opposite of what was expected. Present the following questions and give the groups 10 minutes to discuss them:

7. Now call out a number from 1 to 4. Ask the student in each group with the number called to report the group’s conclusions to the class. Have the representatives from each group take turns answering the questions, based on their group’s discussion.

After Arizona Senate Bill 1070 passed in 2010, about two dozen similar bills were introduced in state legislatures across the country; five passed in Alabama, Georgia, Indiana, South Carolina and Utah. Have students research the current status of those laws as well as their state’s laws and write a letter to their congressperson that expresses their opinions about racial profiling.

Using Editorial Cartoons to Teach Social Justice is a series of 14 lessons. Each lesson focuses on a contemporary social justice issue. These lessons are multidisciplinary and geared toward middle and high school students.
article
Bookmark Arizona Legalizes Racial Profiling

Hundreds of high school and college students gathered around the state capitol in Phoenix, Arizona, on Friday. They were there to convince Gov. Jan Brewer to veto Senate Bill 1070. These young protesters were disappointed though. Brewer signed the bill and instantly set back relations between whites and Latinos in Arizona and other parts of the country.
Sean Price
x