This is the sixth lesson in the series "Using Editorial Cartoons to Teach Social Justice."

The United States military allows gay and lesbian service members to serve in the armed forces as long as they don’t tell anyone they’re gay. The policy is commonly referred to as “Don’t ask, don’t tell,” or DADT. In other words, no one will ask a soldier about his or her sexual orientation, and no gay or lesbian soldier should talk about it.

This cartoon addresses the issue of equality in the military. 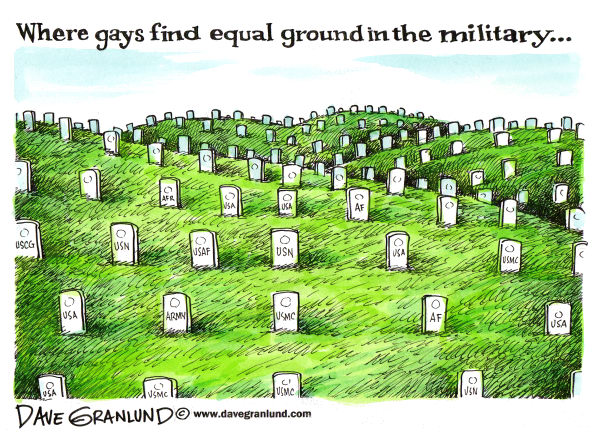 An idiom is a common phrase that can’t be understood literally. A few examples of idioms: We’re off the races; s/he had a hand in the cookie jar; and bite your tongue. In each case, the phrase isn’t literal. When someone says “Bite your tongue,” they don’t actually want you to bite your tongue. They want you not to say what you’re saying. A translation of “bite your tongue” might be: “Don’t say that because I hope it isn’t true and I don’t even want to consider that it might be.”

Sometimes editorial cartoons use idioms to make their point. In this cartoon, the artist uses the phrase “equal ground.” Do a search to find out what the idiom “on equal ground” means. Write a definition here.

Puns or Plays on Words

This cartoon also uses a play on words. Consider the image in the cartoon. What literal “ground” does the cartoon show? What point is the cartoonist making by using that image with the idiom “equal ground”?

What does the cartoon say about equality for gays in the military?

Now try it yourself. Make an editorial cartoon about equal rights using one of the following idioms.