“Jerrie Mock” is a story written by Tamera Bryant for publication as a Perspectives for a Diverse America text in 2013.
Author
Tamera Bryant
Grade Level
K-2
Teach This in a Learning Plan
X
Add to an Existing Learning Plan
START A NEW LEARNING PLAN
Bookmark Jerrie Mock
Print

She couldn’t cross the street …

But she flew around the world

When Jerrie Mock was a little girl, people thought that all girls should look clean and pretty, play with baby dolls, and have tea parties together. Boys were supposed to get dirty and messy, play ball and build forts and tree houses together.

But there was a problem. Jerrie was not allowed to cross the street, and across the street is where all the other girls in her neighborhood lived. Well, you can guess what happened. Jerrie played with the boys. She played tag and ball games. She climbed trees, and she got messy and dirty. And she had fun.

Then one day, Jerrie’s mother said, “You are old enough to cross the street now. Go and play with the other girls.” So Jerrie went across the street. But there was a new problem. Jerrie did not want to sit still and sip tea. She wanted to run and jump and climb.

So she went back to the other side of the street.

One day, when Jerrie was 7, she took an airplane ride with her parents. She loved it so much that she told everyone she met,“I am going to fly an airplane around the world one day!” Everyone smiled and nodded, but no one believed her. They knew that boys grew up to be airplane pilots, and girls became housewives and mommies.

When Jerrie took flying lessons, the other pilots said, “She’s a natural. She would be a good pilot if she wasn’t a girl.” But Jerrie did not worry about any of that. One day, she said, “I am going to make my dream come true. I am going to fly my plane around the world.”

Well, planning a trip around the world is not easy. Jerrie spent a whole year studying maps and getting her plane, which she called “Charlie,” ready to go. Finally, it was time. Jerrie had packed so many things in her little plane. She had her suitcase, shoes, a lunchbox, a life raft, a typewriter, paper and envelopes, a big box of tissues, manuals, and maps, maps and more maps. There was hardly room for Jerrie to squeeze herself in, but she managed. A crowd of people gathered around to say “Good luck!” and “Be careful!” The voice from the control tower said, “Charlie cleared for take-off.”

It was really happening! Jerrie steered Charlie down the runway faster and faster, until the little plane lifted off the ground and made its way into the cold, clear sky. The voices and cheers of people on the ground faded away. The only noise now was the hum of Charlie’s engine. Jerrie let out a sigh of relief. “It’s just you and me now, Charlie,” she said 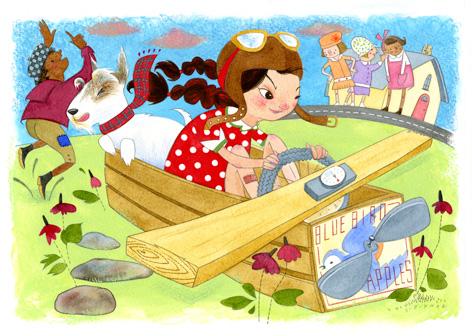 For the next 30 days, Jerrie flew Charlie over oceans, rivers, deserts, mountains, farms and cities. They made 20 stops for fuel and rest. At one stop, men working at the airport were confused. When Jerrie climbed down from the plane, the men asked, “Where is the pilot?” Jerrie said, “I am the pilot.” The men did not believe her. They said, “Women cannot fly airplanes.” And they searched Charlie, looking for the man they were sure was hiding inside. No one was there. The men scratched their heads. Jerrie smiled politely. “No one is with you?” the men asked. “It’s just me and my plane,” Jerrie said. The men walked away, shaking their heads.

When Jerrie landed back at the airport where she had started, she was so happy. She had done it! She had flown her airplane all the way around the world. And she was the first girl who had ever done it. A crowd of people came to greet her. Over and over they shouted, “Hooray for Jerrie!” and “Way to go, Jerrie!” But one thing they never said again was, “Girls can’t fly airplanes.”