The Fiery Tail: A Chinese Tale of True Beauty

“The Fiery Tail” is a story written by Hua Long and originally published in the Fall 1995 issue of Teaching Tolerance magazine.
Author
Hua Long
Grade Level
K-2 3-5
Teach This in a Learning Plan
X
Add to an Existing Learning Plan
START A NEW LEARNING PLAN
Bookmark The Fiery Tail: A Chinese Tale of True Beauty
Print

The Peacock Fairy had the head and arms of a woman but had a peacock’s tail and body. All the peacocks in the world wanted to be her apprentice and learn some of her magic tricks. One day she brought them all together. 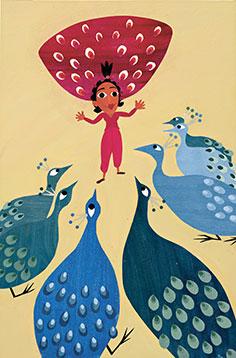 “I know you all want to be my apprentice, but I can only choose one of you, and you all look alike,” she said. “Come back to me at midnight, and don’t all look the same!”

They all left making plans to make themselves more beautiful and stand out from the crowd. But one good-hearted little peacock thought to himself, “I am such an ordinary peacock, there is no hope for me. I’ll just go on my way and not worry about it.”

Soon he met an old man who was hot and sweating. Little Peacock gave him some of his tail feathers to make a fan and cool off.

Then he met a young girl, crying by the roadside. When he asked what the matter was, she said, “I have been asked to a dance, and I have nothing good to wear.” Without a word, Little Peacock pulled some feathers from his tail, and gave them to her, to put in her hair and cover her gown.

And so it went the rest of the day, with Little Peacock giving away all his plumes to help people in need. Near dark, he overheard voices from a hut along the road. A little boy said, “Mommy, I know I must stay in bed to get better, but I know if I see fireworks at the festival I will be well. Can’t I see the fireworks now?”

“But my child, they don’t set off the fireworks until the festival starts, and it is too early for the festival,” answered his mother.

When Little Peacock heard these words, his eyes filled with tears. “If only I could show him my display of feathers, he might believe they were fireworks.” But, sadly, he had given away all his plumes.

At midnight, all the peacocks assembled before the Peacock Fairy. Some had fireflies set in their tails to look like stars, and many had flowers in their plumes. Surely it would be difficult to choose an apprentice!

“My friends,” said the Peacock Fairy, “you all look so beautiful! But I see one who looks very different from the rest. Little Peacock, come here. Where are all your feathers?”

Little Peacock told his story, how he had given away all his feathers to help people. The Peacock Fairy thought for a while, then smiled and said, “Little Peacock, you are the apprentice I want.” With a wave of her hand, one plume from every peacock rose in the air and formed a large beautiful fan. Then the fan came down upon Little Peacock’s tail!

“Now, I will teach you another trick,” the Peacock Fairy said. She whispered magic words in his ear, and, when he repeated them three times, his tail burst into a kaleidoscope of fire!

Little Peacock soared into the air, flying over all the villages with his fiery tail. When the sick little boy saw the fire in the sky, he said, “Mommy, I see the fireworks! I feel better already!” Little Peacock flew through the night, bringing joy and happiness throughout the land. 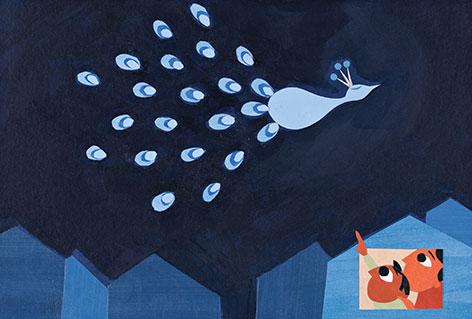 And so when you see fireworks exploding during festivals, look closely for the Little Peacock with the Fiery Tail.