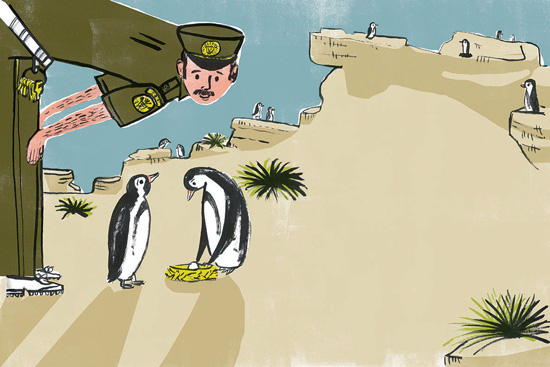 A Humboldt penguin is not very big. It is about two feet‚ two inches tall‚ and it weighs about 10 pounds. It is much smaller than you are.

This is a true story about two Humboldt penguins—Z and Vielpunkt.

Z and Vielpunkt are best friends‚ and they are a family. They met at the zoo in Bremerhaven‚ Germany‚ and liked each other right away. When Z saw Vielpunkt‚ he bowed. Then he stretched his head and bill up toward the sky and lifted his flippers. He opened his bill wide and let out a loud braying sound. When Vielpunkt saw Z‚ he did the same. They were saying “I like you!” to each other.

From that day forward‚ Z and Vielpunkt were always together.

Like all penguins‚ Z and Vielpunkt liked to swim and dive in the water. They were very fast swimmers. The zookeeper brought fish for them to eat each day. Anchovies and sardines—delicious! When it was time for bed‚ Z and Vielpunkt would waddle to their home. They lived inside a small cave in a rocky cliff at the zoo. Sometimes‚ before they went in for the night‚ they would bow and point their bills toward each other. They were good partners.

But sometimes they were sad‚ too. Every year‚ Z and Vielpunkt watched the other penguin partners get their nests ready for the eggs that one partner of each pair would lay. Z and Vielpunkt got their nest ready‚ too. They lined it with sticks and feathers‚ and they waited for an egg. But male penguins can’t lay eggs‚ so Z and Vielpunkt’s nest stayed empty.

Five years went by‚ and no egg appeared. They were sad. They wanted a chick of their own.

And then one day‚ something wonderful happened!

Then the zookeeper thought about Z and Vielpunkt. He knew they wanted a chick to add to their family.

Carefully‚ he picked up the little egg and carried it to Z and Vielpunkt. Their nest was ready and waiting‚ just as it had been for the past five years. The zookeeper laid the egg in the nest.

Z and Vielpunkt were so happy! And they knew just what to do. They knew that the egg needed to stay warm. They took turns sitting on it. When Z was on the egg‚ Vielpunkt kept watch. When Vielpunkt sat on the egg‚ Z kept watch. They did not want anyone or anything to hurt their precious egg.

The two fathers took care of their egg for 35 days. Then the shell began to crack. Then it began to open. Inside was their tiny chick! It was covered in dark and velvety gray feathers. And it was beautiful. Its eyes weren’t opened yet‚ so it could not see its two proud fathers. But Z and Vielpunkt could see the chick! They were so proud and so happy.