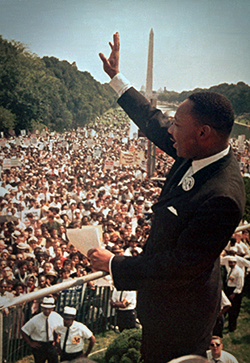 A couple years ago, my then 3-year-old daughter announced her intentions to draw a picture for President Barack Obama.

“Because he’s my brother,” she said and sat down with an array of crayons, markers and paper.

She didn’t fully comprehend the significance of a black man as president in the United States; could not define her racial group identity; had not yet learned about racial injustices, oppression and the history of the Jim Crow South; but she instantly connected with Obama on a deeper, familial level.

As an African-American mother of a multi-racial child, I am grateful for my daughter’s real White House connection. It opens a world of possibilities. That she could be president—or anything she aspires to—is imaginable, because someone who looks like her is already there.

It’s fitting that President Obama’s second inauguration falls on Jan. 21, MLK Day.  Dr. King helped open many doors. His vision—and the courageous and tireless efforts of the thousands of people who worked with him—opened the door for a Barack Obama to be elected not once, but twice, to the highest office in the country.

I’ve often wondered what made Dr. King commit to the 13-year journey of leading a movement. He witnessed injustices and knew that, as a country, we had to do better. In Georgia, Dr. King attended segregated schools. He saw generations of black children in subpar, segregated schools. He lived under the arbitrary limits that relegated black people to second-class citizenry, confined to the backs of buses, schools with fewer resources, and lives with fewer opportunities.

I imagine he looked into the eyes of his baby daughter and said yes to 382 days of a Montgomery Bus Boycott that led to equality for bus passengers, yes to marches in the face of fire hoses. He said yes to risks and criticism. He brought his people together to march on Washington and pushed for passage of the Civil Rights Act of 1964. He led others to Alabama’s capital and paved the road to the 1965 Voter Rights Act. He said yes to multiple arrests, sleepless nights and exhausting strategy sessions. The goal was bigger than he was.

Dr. King’s work led to greater racial integration. It also inspired women, Latinos, American Indians and LGBT people to take action against injustice. He didn’t achieve all he set out to, but he pried the doors open for children to realize their amazing potential.

Those open doors made it possible for my mother to buy a home in an integrated Chicago neighborhood with one of the best schools in the city. They led me to a journalism career and the ability to live in neighborhoods of my choice.

As a parent I want to open doors for my daughter and expand her opportunities. On Monday, we’ll watch the inauguration together, so she continues to be inspired by her “brother.” We’ll mark MLK Day with a service project.

I want her imagination of what’s possible to grow. She’ll develop her own vision for her self.  Her place in the world will be expansive.

There is more work to be done. Thank you, Dr. King, for opening the door.