Young people who are overweight can face a lifetime of discrimination.
David Aronson
Issue 26, Fall 2004
Illustration by Craig Fraizer
Teach This in a Learning Plan
X
Add to an Existing Learning Plan
START A NEW LEARNING PLAN
Bookmark No Laughing Matter
Print 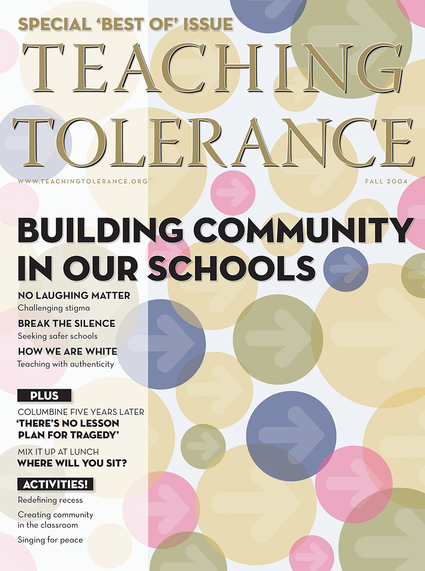 Thirteen-year-old Rebecca Schafer of Palo Alto, Calif., weighs a bit more than other kids her age. It's a fact that is hard to forget, due to the frequent reminders she receives from classmates -- usually in the form of jokes and taunts. Rebecca does her best to deflect the wisecracks about her size, but it isn't always easy.

"Usually, if someone teases me, I try to think of something snappy to say back," explains Rebecca (not her real name). "When people say stuff like, 'You're fat like a cow,' I'll say, 'What, like I don't know I'm fat?' And sometimes that will keep them quiet." But for a while, the teasing became relentless.

"At my swim practice, there were these guys who just pounded on me day after day, and it made me feel really sad. I couldn't think of anything to say back to them because I was so upset. Every day I came home wanting to cry," she remembers. "I'm in eighth grade, and even though teasing is still a big issue, teachers think we're more mature, I guess, so they don't do much about it."

Rebecca's school experience typifies that of many overweight children. According to a report compiled by the National Education Association, students who are overweight face almost constant harassment, discouragement and even discrimination at school. They are often ostracized by their peers and denied places on sports teams and cheerleading squads. Such treatment can result in low self-esteem and limited horizons, the report states. Sometimes, the consequences are extreme. A year ago, a 12-year-old Florida boy killed himself when the teasing about his weight became unbearable.

A number of studies indicate that children who are overweight pay a high price socially. Dr. Jeffery Sobal, of Cornell University, says that kids who are shown pictures of other children with a variety of physical attributes -- including excess weight, facial disfigurement and missing limbs -- pick their overweight peers last when asked whom they would like to play with.

And the effects of discrimination can last a lifetime. "All kinds of tests have been done," says Sobal. "Submitting virtually identical applications to colleges, for example, with photographs of overweight or average weight people, produces strikingly different acceptance rates. The same goes for job applications -- write '260 pounds' in the weight column rather than '160,' or send testers in with similar résumés for interviews, and the results point to a strong correlation between obesity and rejection."

According to Sobal, people tend to stigmatize the overweight because of the perception that obesity is self-inflicted, and that it represents some essential character flaw. "Today, the youth culture identifies health with thinness. It follows that people who are overweight are not in control, not self-disciplined." In actuality, he says, there is increasing evidence that obesity is as much a matter of genetics as of personal habits.

More than 25 percent of children ages 6 to 17 are overweight, and those who are more than 30 percent above their ideal body weight are considered obese. Typically, overweight children become overweight adults. Medical research links obesity in adults with a number of ailments, including high blood pressure, diabetes, heart disease and certain types of cancer.

However, some researchers argue that the studies linking obesity to medical problems don't take into account eating and exercise habits of participants. "If you're overweight, but you exercise, then you could be as healthy as someone 40 or even 60 pounds lighter," says Dr. David Levitsky, also of Cornell.

Ellyn Satter, a Wisconsin dietician and therapist who has worked extensively with overweight children and their families, believes that teaching students about size diversity is as important as teaching them about exercise and healthy food choices.

"We're real conscious of cultural differences and handicaps, and we teach children not to pick on others who are different in those ways. Somehow that teaching doesn't get done with regard to the fat child," Satter says. "There's a social attitude that if you're mean enough [to overweight kids], then maybe they'll do something about their size."

Dr. David Kallen, of Michigan State University, agrees that focusing on size as one facet of human diversity can help diffuse prejudice against the overweight. "Talk about variations in skin color, cultures, religion, but don't neglect body type," he says. "Point out that most children who are overweight were in all likelihood born that way, and that being heavy was for most of human history and prehistory a survival mechanism. Confront the false stereotype of the lazy overeater -- get kids to realize that weight is just one more characteristic that makes us variable."

Kallen recommends several strategies to discourage teasing. One helpful approach, he says, is to position an overweight child in peer groups where his or her talents can be seen as useful or fun. "Once the friendships are made, being overweight is overlooked. Instead of Jimmy the Fat Boy, it becomes Jimmy the Lead Singer in the Choir or Jimmy the Math Tutor," he explains.

If teasing persists, Kallen says, the best coping mechanism for some children is simply to ignore it, and the taunts will gradually diminish. Other experts say that, depending on the personality of the child, confronting the teaser or making a witty comeback can also be effective.

Regardless of how children choose to respond to verbal attacks, Jeffery Sobal feels it's important for the teacher to acknowledge the problem in some way. It's easy for any group that is the target of prejudice to internalize the prevailing stereotypes about itself, he warns. Consequently, it takes a real effort to make the child see that the problem isn't that he or she is a "bad" person but that he or she simply has a condition that causes others to react in a negative and ignorant manner.

Joanne Ikeda, a nutrition education specialist for the University of California at Berkeley, cautions teachers not to assume that all large kids have esteem problems, however. "Some overweight children are respected. In athletics, for example, if you're big and you're strong and you're coordinated, size can be an advantage."

There are also cultural variations in people's attitudes about body size, she says. Studies conducted among Black and White girls and Latinas have shown that Black girls and Latinas tend to focus on style and grooming in defining beauty, while White girls emphasize slimness. Ikeda points out that in some cultures, fat is considered a mark of prosperity and is consequently viewed more positively.

However, the reality in many school environments is that overweight children run up against ridicule and rejection. "Sometimes people dislike me, and I think that maybe the only reason why they dislike me is because I'm fat," says Rebecca Schafer. "I mean, I'm a nice person and I'm pretty open, and I don't think I'm doing anything that would make them hate me." She says she wishes her peers would remember that "it's what's on the inside that counts. You don't have to weigh a hundred pounds to be a good person."

Rebecca is now in a different ability group on her swim team, so she no longer has to face the boys who tormented her. But she still gets angry when she remembers their cruel remarks. "I put up with their abuse for a year, and it made me feel terrible," she says. "There's no way that anyone should ever do that to any person, no matter what they look like. It's just wrong."

Joanne Ikeda agrees. "The fact is, we really have very little control over the way our bodies turn out," she says. "The hope is that you adopt a healthy lifestyle. But many people, even with a healthy lifestyle, are going to end up being large. We just have to deal with the full spectrum of sizes and shapes human beings come in."