Kawania Wooten’s voice tightens when she describes the struggle she’s having at the school her son attends. When his class created a timeline of civilization, Wooten saw the Greeks, the Romans and the Incas. But nothing was said about Africa, even though the class has several African American students.
Afi-Odelia E. Scruggs
Issue 36, Fall 2009
Illustration by Peter Grundy
Teach This in a Learning Plan
X
Add to an Existing Learning Plan
START A NEW LEARNING PLAN
Bookmark Colorblindness: the New Racism?
Print 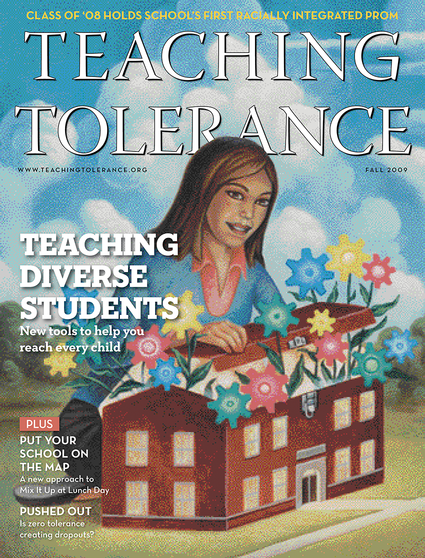 Kawania Wooten’s voice tightens when she describes the struggle she’s having at the school her son attends. When his class created a timeline of civilization, Wooten saw the Greeks, the Romans and the Incas. But nothing was said about Africa, even though the class has several African American students.

Wooten, who is black, spoke to the school’s director, a white woman — who insisted that the omission wasn’t racially biased.

“Her first comment was, ‘you know, we’ve just been following the curriculum. We’re not talking about whether people are white or black,’” recalls Wooten, who lives in Bowie, Md. “I said that the children have eyes and they can see. And I’d like them to see that our culture was a strong, viable culture.”

That kind of story brings a groan from Mark Benn, a psychologist and adjunct professor at Colorado State University. He hears similar tales whenever he delivers lectures about race relations.

Such incidents are examples of  racial “colorblindness” — the idea that ignoring or overlooking racial and ethnic differences promotes racial harmony.

Trainers and facilitators say colorblindness does just the opposite: folks who enjoy racial privilege are closing their eyes to the experiences of others.

Paying attention to the cultural experience of students is becoming increasingly important, given the differences between the demographics of American students and their teachers.

According to reports from the National Center for Education Statistics, roughly 80 percent of American teachers are white, while children of color make up more than 40 percent of the student body.

As the nation’s demographics shift, the sight of a white teacher leaning over the desk of a brown or black student is likely become more and more common. In order to be effective, teachers will have to learn about the cultural experiences of their students, while using these experiences as a foundation for teaching. The approach is called culturally relevant pedagogy.

But that is hard to do if a teacher doesn’t see differences as valuable. That means the blinders have to come off, says Randy Ross, a senior equity specialist at the New England Equity Assistance Center, a program of Brown University’s Education Alliance. Ross facilitates workshops on racism and culturally responsive teaching. And in her experience, white people have the hardest time opening their eyes.

“I have never heard a teacher of color say ‘I don’t see color,” Ross says. “There may be issues of cultural competence [among teachers of color], but colorblindness is not one of them. The core of ‘I don’t see color,’ is ‘I don’t see my own color, I don’t see difference because my race and culture is the center of the universe.’”

Such tunnel vision is the reason a teacher can omit Africa from a timeline of world civilizations, Ross says. Still, she cautions, the flaws of the colorblind approach run deeper than curriculum.

Failure to see and acknowledge racial differences makes it difficult to recognize the unconscious biases everyone has. Those biases can taint a teacher’s expectations of a student’s ability and negatively influence a student’s performance. Study after study has shown that low teacher expectations are harmful to students from socially stigmatized groups.

In her article “Culturally Responsive Pedagogy for the Nineties and Beyond”, Ana Maria Villegas pointed out that ignorance of cultural differences could lead teachers to “underestimate the true academic potential” of minority students.

“The evidence is overwhelming. When compared to their ‘high-ability’ peers, ‘low-ability’ students are called on less often in class, given less time to respond, praised less frequently...and prompted less often in the case of incorrect responses.”

Ross says a teacher who professes to be “colorblind” is not going to understand how unconscious biases can influence expectations, actions, and even the way a teacher addresses students of color.

After talking to her son’s teacher, Kawania Wooten wondered whether her son was being harmed in just that way.

She’d asked for advice on helping the youngster complete a difficult project. Instead, the teacher immediately offered to give him easier work. Just as quickly, Wooten refused. Then she explained the racial subtext of the exchange: the white teacher doubted the intelligence of an African American child.

“I heard that expectations of my son were low,” Wooten says.

Such misunderstandings could be avoided, she believes, if the teacher learned some things about African American culture.

The core of 'I don't see color,' is 'I don't see my own color ... because my race and culture is the center of the universe.'

“You don’t get comfortable talking about race by talking to people who look like yourself,” Ross notes.

The fear of appearing racist also throws up roadblocks. Ross recalled a workshop participant who said she’d been taught to ignore race when she’d gone to college in the 1950s. Now, the woman lamented, she was being urged to practice behavior she considered bigoted.

But claims of colorblindness really are modern-day bigotry, according to Eduardo Bonilla-Silva, a sociology professor at Duke University. In his book White Supremacy and Racism in the Post-Civil Rights Era, Bonilla-Silva argues that racism has become more subtle since the end of segregation. He considers colorblindness the common manifestation of the “new racism.”

“Whites believed that the Sixties was the end of racism,” says Bonilla-Silva, who is a Puerto Rican of African descent. “In truth, we have to admit that struggles of the Sixties and Seventies produced an alteration of the order.”

That alteration upended the rhetoric of the civil rights struggle, Bonilla-Silva said, so that historically oppressed groups would seem to be the perpetrators of discrimination, not its victims. As an example, he points to the way affirmative action foes buttressed their position with the Rev. Martin Luther King, Jr.’s quote from the 1963 March on Washington.

“They say ‘like Martin Luther King, I believe that people should be judged by the content of their character.’ People eliminate the history and contemporary practice of discrimination and play the morality tale,” Bonilla-Silva says.

Building a bridge to another culture can be difficult, but rewarding, as Aileen Moffitt has seen during her 20 years at Prescott Elementary School in Oakland, Calif.

The 300-student population of the school is overwhelmingly black, but Latinos, Asian Americans, whites and Native Americans also attend.

Moffitt never claimed to be colorblind. Before becoming a teacher, she had quite a bit of interaction with African-American youngsters because she worked in the city’s parks and recreation department. She was surprised, then, when she had trouble reaching her students.

“I started as a well-intentioned white woman who was not awake,” she says with a deep laugh.

Moffitt found mentors in other veteran teachers who were African American. The women led the way when it came to integrating cultural references from their students’ backgrounds across the curriculum.

“My point is that it behooves us as educators to utilize the strengths that our children bring to the classroom — a rich language, a strong culture, a remarkable history. We do not need to be afraid of these strengths,” she wrote. “The children I teach are more likely to be productive members of society if they have a strong sense of self to accompany their mastery of the curriculum.”

This piece investigates the concept of color blindness and helps teachers recognize the importance of race and ethnicity in students' lives.
x