Susie King Taylor's illegal education as an enslaved child turned her into a teenage teacher and nurse during the Civil War.
John Perritano
Issue 40, Fall 2011
Add to a Learning Plan
X
Add to an Existing Learning Plan
START A NEW LEARNING PLAN
All articles from this issue
Print

Captain Whitmore asked me where I was from. I told him Savannah, Georgia. He asked if I could read; I said, “Yes!” “Can you write?” “Yes, I can do that also,” …

With those words, 13-year-old Susie Baker began a great adventure toward a new life. She had been born into slavery. But she had fled with an uncle and others from their owners in Georgia. Now they had reached the safety of a Union Army camp on a South Carolina island. 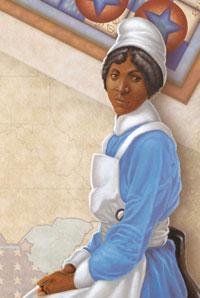 A terrible war had begun the year before—the U.S. Civil War. Southern states had split from the country. They had banded together as the Confederacy. Southerners did this mainly to protect their practice of putting black people into slavery. Northern states, also known as the Union, were determined to reunite the country. Many on the Union side also saw the war as a chance to end slavery. By 1862, more and more blacks like Susie were escaping to Union lines.

At age seven, Susie had started learning to read and write. In the South, it was illegal for anyone to teach enslaved people these skills. They did not want slaves to learn. Southerners feared that educated slaves might rebel against them. But Susie’s grandmother knew that an education was very valuable. She arranged for Susie to study at secret schools.

In the Union camp, an officer asked Susie to teach other black children. The 13-year-old teacher soon had a class of 40 students. Black men asked her to teach them, too. They were eager to learn now that they were free.

Soon, though, many of the men had other duties. The Union Army began asking them to serve as soldiers. At 14, Susie married one of them, Edward King. She joined her husband in camp, serving as a nurse. She also had other tasks, like cleaning laundry and getting guns ready for battle. “I learned to handle a musket very well . . .” she remembered later, “… and could shoot straight and often hit the target … I thought this great fun.”

As the first black nurse in the Union Army, Susie saw the bloodiness of war up close. “It seems strange how our aversion to seeing suffering is overcome in war,” she said, “how we are able to see the most sickening sights, such as men with their limbs blown off … without a shudder; and instead of turning away, how we hurry to assist in alleviating their pain.” Clara Barton, who later founded the Red Cross, described Susie as “one of the finest nurses we have.”

Susie served throughout the war. She endured many enemy attacks. She also survived a shipwreck in which others drowned. Susie never received any pay for her service. Yet she never saw this work the same as she did slavery.

The Civil War ended in 1865. The Union, including 180,000 African-American soldiers, had defeated the Confederacy. More than 600,000 men had died. But slavery was at last banned.

In the years after the war, Susie moved to Boston. Her first husband had died and she remarried. In 1902, Susie King Taylor published her life story. In it, she told of her wartime adventures and the joys of freedom. But she also expressed frustration at the slow pace of equality for African Americans.

“We hope for better conditions in the future,” she wrote, “and feel sure they will come in time, surely if slowly.”