LETTERS TO THE EDITOR

You Spoke, We Listened 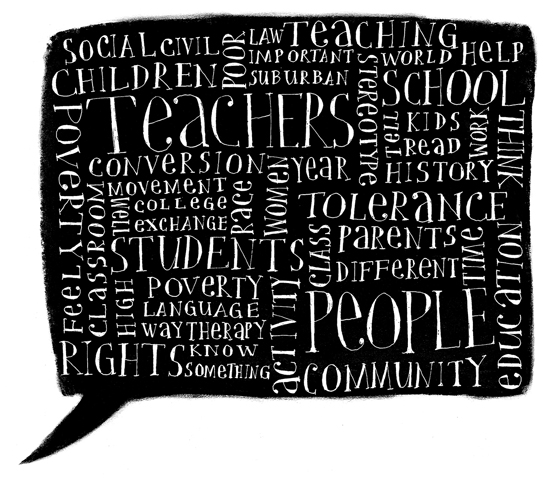 I would hope a parent would teach their child these things. I would not leave these topics up to the school.
–Submitted by Tracie Cinquegrana Warren

My daughter volunteered with Safe Harbor when she was in high school. The organization has a program that goes into local schools and talks about dating violence. It used to be called the Megan Project. Megan was shot and killed by her boyfriend in 1997 as she sat on the lifeguard stand at a local neighborhood pool. He then killed himself. This was during the day in front of about 30 or so people, including children. She had recently broken up with him. It is a bigger issue than people realize, and it has been going on for a long time.
–Submitted by Darlye Hert

Our last issue once again sparked a lively response, particularly to “Class Outing,” an article that explored the fragile gains in acceptance of LGBT educators. Many of you emphasized that sexual orientation has nothing to do with an aptitude for teaching and that gay students need role models too.

'Coming Out' Tough for All School Staff

I just finished reading the “Class Outing” article. I am an “out” lesbian, however, I am not a teacher. I am an education support professional (ESP), perhaps better known as a classified employee. If you think coming out as a teacher is hard, try doing it as an ESP. We average about a third of the legal protections and earn significantly less, so we are even more vulnerable. And even more invisible.

Thank you for making teen-dating violence a cover story in your magazine. As a violence prevention coordinator for a domestic violence center for the past 13 years, it is nice to see how many places teen-dating violence is being addressed. Your article was well written and provided access to support information. These are always important to see in articles on this topic. Thank you for your great work all around and including this issue in the magazine!

I was enjoying the prospects of the “Civil Rights Road Trip Post Card Activity” but was disappointed at the exclusion of South Carolina, Georgia and Florida, especially as a person raised in Rock Hill, S.C. I went to school with the children of the Friendship Nine and was part of the first fully integrated class of South Carolina public school students. To overlook those states and the role they played in furthering civil rights, not just in the South but for the country as a whole, is a disservice to those who have worked for civil rights and to those who have benefitted from those efforts. If the story of struggle is left incomplete, those in South Carolina, Georgia and Florida are penalized with a lingering stigma that they did not or have not done anything of note. This, I feel, is increasingly important in a time when popular culture continues to sell the American South as a land of uneducated people—hillbillies and rednecks—as opposed to the diverse cultural, social and economic region it is. The struggle continues for civil rights, a just society and to break stereotypes.

I have looked several times to see if Mighty Times: The Children’s March had been put on DVD yet, so finding out this year that it has been is totally awesome. I first used The Children’s March at the 50th anniversary of the Montgomery Bus Boycott. I was new to teaching sixth grade and history. Your video was amazing. I learned so much and felt so proud of these children. Every year I can’t wait to show it to my next two classes of children, as well as the three other classes that borrow it. One year I had a lady in class who had been hosed down when she came south to visit family for the summer. Every year the children are amazed at what happened. And every year teachers fall in love with your video.

Tell Us What You Think!

Have an opinion about something you see in Teaching Tolerance magazine or on our website? Contact us or mail a letter to 400 Washington Ave., Montgomery, AL 36104.