Allowing In the Light

How one rural teacher inspired empathy with pizza, stories and an open door.
Chelsea Tornetto
Issue 57, Fall 2017
ILLUSTRATION BY PING ZHU
Teach This in a Learning Plan
X
Add to an Existing Learning Plan
START A NEW LEARNING PLAN
Bookmark Allowing In the Light
Print

Like so many other educators, I became a teacher because I wanted to make the world a better place—to remove blind hatred and build up understanding. But, over the years, I have grown increasingly frustrated by the sometimes-blatant racism and lack of compassion I hear from both my students and the United States’ increasingly polarized political arena. Picture this scene, a version of which played out again and again in my classroom.

It is February. My seventh-graders and I are starting a unit on the Middle East.

“One of the big topics we’re going to cover is the religion of Islam,” I say, bracing myself.

“Terrorists!” snickers one student. The other students join her.

“Well, it’s interesting you should say that,” I say. “Because even though we hear a lot on the news about terrorist attacks that are carried out by Muslims, in reality, very, very few Muslims are terrorists.”

“Just most of them,” another student chimes in. Another smattering of chuckles and sounds of agreement ripple through the room.

“And one of the things we’re going to talk about in this unit is the real beliefs of the religion of Islam and how important it is to the culture of the Middle East.”

“Bomb ‘em!” another student half-coughs, half-shouts, grinning at his friends. The class erupts in laughter.

In my classroom in rural Missouri, moments like this are all too common. I wish I could say things have improved over the course of the 11 years I’ve been teaching. With our current political climate and the increasingly brazen rhetoric we hear coming from our political leaders and the media, it seems, instead, to be getting worse.

Sometimes I find myself thinking, “Can I really make a difference against all this?”

I can’t fault the students. At just 12 and 13 years old, they simply repeat beliefs and behaviors they see and hear in the media, online and at home—beliefs considered widely acceptable throughout their own community. If I reprimanded them or lectured them on stereotyping, they wouldn’t take it seriously, nor would they gain from it. At best, they would become defensive. At worst, they would feel like they could no longer share their thoughts in my classroom.

No matter how engaging the lesson plan or how lively the discussion, there will always be a level of personal experience missing from what I teach. My students will most likely never face the choice of either watching their family starve or leaving them to look for work in a foreign country. I suspect many of them have never met a non-Christian, let alone watched as their family is persecuted because of their faith. Many of them will fill their carts at Wal-Mart with little to no awareness of the day-to-day struggles of the Chinese factory workers who made it possible for them to do so. And I can’t give them those experiences.

A story is often the most effective way to create personal connections between very different people. Reading a novel allows us to see the world through someone else’s eyes, remove the context we are used to and replace it with something new. We are more prepared to accept things beyond our own experiences because we know we are reading a ‘‘story,’’ and yet we also actively search for similarities between our own lives and the lives of the characters. A novel can begin to open students’ minds and shape their hearts, without doing battle against their sense of self.

However, like most teachers, I simply didn’t have enough money or time to incorporate a young adult novel into every unit in my regular curriculum. So, I resolved to start on a smaller scale.

The summer I resolved to try to help expose my students to more stories, I spent weeks reading books that sounded like they might match my curriculum. Our school librarian borrowed extra copies of these titles from neighboring libraries; I posted a flyer outside my door advertising a voluntary book club. Students would read the first book for that month and attend a meeting where we discussed the book while we ate pizza. That was it. Just good, old-fashioned, food-based bribery and a good book.

A novel can begin to open students’ minds and shape their hearts, without doing battle against their sense of self.

To my surprise, six students signed up. I paid for the pizza myself and let students lead the discussion.

It was incredible. The first book I chose was Crossing the Wire by Will Hobbs, which tells the story of a young boy who must cross the U.S.-Mexico border to earn money for his family’s survival. The questions my students asked were genuine, and their comments gave me valuable insight into their concerns and misconceptions. 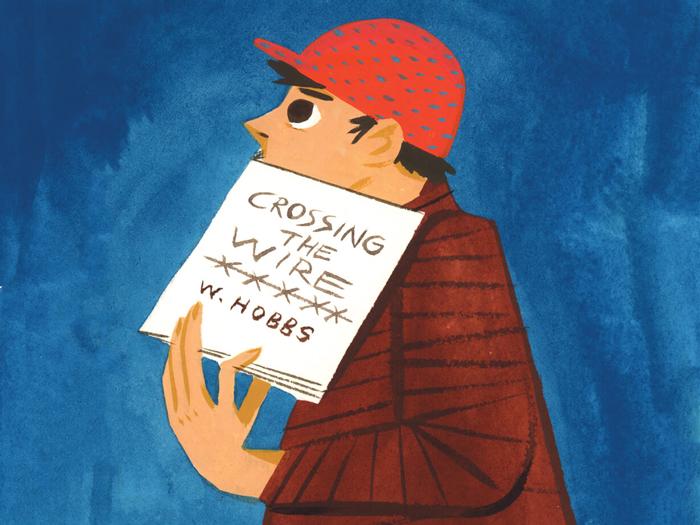 Are the workers at the local Mexican restaurant illegal immigrants?

Why don’t we want them to come here?

I didn’t know how bad it was for them in Mexico.

Why doesn’t their government help them more?

Why do people hire them if they know they are illegal?

A colleague and I fielded questions and guided conversation. We pulled up maps and photos on the internet and encouraged the students to keep talking. We were very careful not to take a stance for or against immigration. We played devil’s advocate back and forth, making sure all sides of the argument were heard and challenging bias when it arose.

Suddenly, the issue took on a human face. A topic the students had once viewed as black and white started to take on shades of gray. And, most important, an entire group of people whom they had previously referred to as “those Mexicans” became real people not so different from them.

Before we knew it, the bell was ringing and lunch was over. And all six students were asking me when they could do this again.

The next time, even more students attended, and we’ve been growing and improving ever since. We now meet once a month for seven months during the school year. Each novel directly correlates to the unit we are covering in class and brings the human element into vivid focus for the students. We meet during lunch and recess and still provide free pizza—now paid for by a local sponsor. One of my students pointed out, “At first, when I started, I did it for the food, but then as I read the books, I really enjoyed the books and what they taught me!”

Structure at our meetings is minimal. Students come in and grab a slice of pizza and a seat by their friends, and we start talking. And best of all, as one of my students recently commented, “I really enjoy talking, but this book club has helped me more to listen.”

The students who attend not only listen; they also take what they’ve learned back into the classroom with them, share it with their classmates and bring it up during class discussions. It helps them understand the content, and it changes the tone of the classroom. Fewer snide comments. More pauses for thought.

They take it home, too. I’ve had parents come to conferences and say, “I learned a lot from that book they were reading. It was really … interesting.”

I’m not saying I’ve solved the problems of racism or sexism or religious conflict with a few good books. But I do believe we’re making a difference. My students have started to see that behind every topic the pundits shout about on the radio are real human beings—parents, students, children—just like them. I hope they are starting to realize that an impulsive “Bomb ‘em!” shouted out in class has very real consequences, especially when that sentiment pervades an entire culture. At the very least, maybe they will think twice before they laugh about it.

As author Vera Nazarian once said, “Whenever you read a good book, somewhere in the world a door opens to allow in more light.” I think book clubs do just that. Ultimately, I hope I have opened up a door to the world beyond rural Missouri for my students and allowed them to see that world in a different, brighter light.

Want to start a social justice book club at your school? Check out these suggestions.

Login to join the conversation
Teaching at its finest. Thanks for sharing!!
Thank you for sharing this great story. Can you share the list of books that you use? I've considering doing something like this for year.
x